Do MOSFETs have voltage drop across source and drain when turned on?

Like diode and BJT having around 0.6V drop, is there any voltage drop across the MOSFET drain and source when the MOSFET is turned on? In the datasheet, they mention diode forward voltage drop, but I assume that it for the body diode only.

The MOSFET behaves like a resistor when switched ON (i.e. when Vgs is large enough; check the data sheet). Look in the data sheet for the value of this resistor. It's called Rds(on). It may be a very small resistance, much less than an Ohm. Once you know the resistance, you can calculate the voltage drop, based on the current flowing.

MOSFET: When the gate voltage is large with respect the the threshold voltage Vth, the voltage drop from drain to source is linearly dependent on current (for small voltages << Vth of the MOSFET), so it behaves like a resistor. The resistance is less when the MOSFET is more enhanced, so a more positive voltage on an n-channel MOSFET gate relative to the source. The equivalent resistor might be tens of ohms for a small MOSFET down to milliohms for a large power MOSFET. From the 2N7000 datasheet you can see that for a gate voltage of 4V and a Vds < 0.5V the resistance is a couple of ohms (typical, worst case would be much more than that). So typically at 50mA, it would drop maybe 100mV. (The resistance Rds(on) is the slope of the curves near the origin). Rds(on) increases greatly with high temperature, so be careful with using 25°C specifications. If you don't give it enough gate voltage (many MOSFETs are specified at 10V, some at 4.5, and fewer at 1.8 or 2.5) you may get a much higher Rds(on). 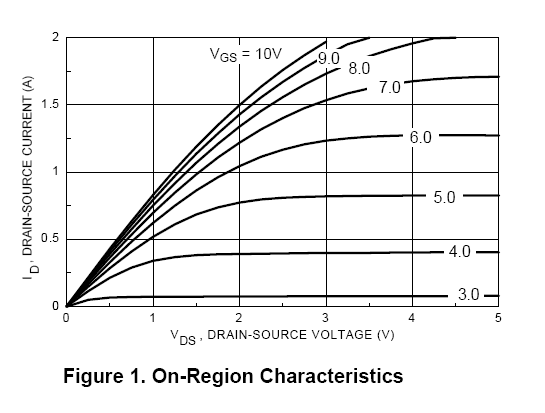 BJT: Voltage drop from collector to emitter is dependent on current but not linearly. At low current and with high base current, the BJT might have a voltage drop of tens of millivolts. From the 2N3904 datasheet you can see the characteristics when Ib = Ic/10. You can see that at, say, a current of 50mA it has a voltage drop of about 90mV so quite similar to the 2N7000. Vce(sat) is the relevant specification. It's pretty stable with temperature, but you must give it plenty of base current for the expected collector current. If you don't give it enough base current, the voltage from collector to emitter can increase greatly. At more than the base voltage it's no longer considered to be saturated. 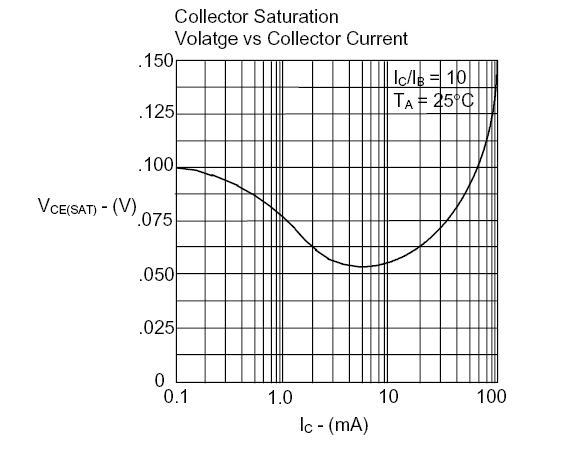 One interesting difference between the two is that the MOSFET drops almost exactly zero voltage at zero current, whereas the BJT drops perhaps 10 mV at zero collector current (assuming you put some reasonable current in the base- that's not reflected in the above curve). That makes the MOSFET generally a superior switch for precision instrumentation applications where 10mV is a big deal.

I think you are comparing two different things.

The 0.6V drop you typically see in a BJT is the B-E (base to emitter) junction.

For a mosfet, a similiar analogy doesnt exist. G-S (gate to source ) will always be whatever the gate voltage is with respect to the source.

For a BJT collector to emitter, that will vary depending on your collector current and collect or emitter resistor.

For a mosfet, there is a paramater called Rds(on) which is the resistance between source and drain. So the D-S (drain to source) voltage, like the C-E voltage will vary depending on current.