Qucs - what is DC sweep?

I'm learning how to use Qucs using the tutorial.

But I have no idea what is DC sweep, AC sweep, parameter sweep, Vsweep, ... and so why to even use them.

Could anyone please help explain what are these "sweep" terms?

P.S. I'm not an electrical engineer, just that basic electronics is a first year subject so highly technical terms will mean almost nothing.

simulation qucs
Share
Improve this question
edited May 8 '18 at 17:02

The term 'sweep' in this context refers to a change from one value to another.

If you look at this picture: 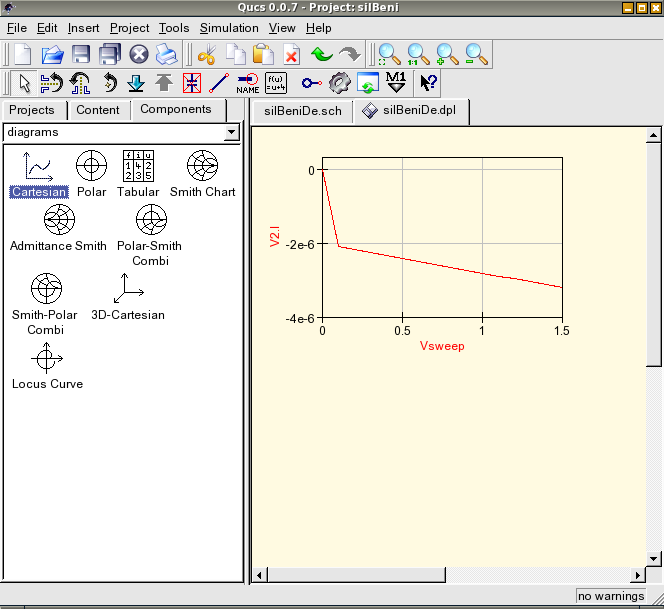 If you didn't have a simulator and were sitting in front of lab equipment, and you wanted to characterize something, you might change a knob over some range and write down the resulting behavior of the circuit, perhaps plotting the data on a graph as you went. The knob could be controlling amplitude, frequency, whatever else you have a knob for on your equipment. You'd be taking measurements with a scope or meter of some kind.

A "sweep" usually means you're only turning one knob, because it's a lot easier to sit there turning one knob a little at a time, pausing for each measurement, than it is to randomly hopscotch over a grid of measurements. If you wanted a wider range of measurements you might do one sweep, change some other settings, and sweep the first one again.

The software is basically doing the same thing for you, to a simulated circuit. Some lab equipment can be programmed to do the same thing to a real circuit. With software, it may be a lot easier to change more than one variable at a time (say both amplitude and frequency), but it can also be more confusing what is affecting what. Holding a system down to where only one variable is changing at a time is a standard way of making it easier to learn what's going on.

Not the answer you're looking for? Browse other questions tagged simulation qucs or ask your own question.

3
Is there a way to open/import gschem .sch file in qucs?
4
How do I measure the characteristics of a voltage divider in a QUCS simulation?
4
How can I create a new component using Qucs?
2
QUCS simulation of simple capacitor/resistor circuit - strange results.
2
Simulate capacitor discharge in Qucs
0
QUCS Darlington pair
1
qucs capacitor simulation
1
Matching wideband antenna with QUCS
4
Qucs model for 2.4 GHz matching circuit
0
Simulation discrepancy in Qucs with 2N3904 transistor