I have the front end of a photodiode detector. What is the point of the 3rd Op Amp? The output from U2C gets divided in half from R14 and R18, then it just gets double by U2D again.

Is there a reason for this other than just using the rest of the 4 stage op amp circuitry? Are the two acting as a stabilizer for the signal?

When would you want to use Cascading (I believe this is the correct terminology) Op amps? 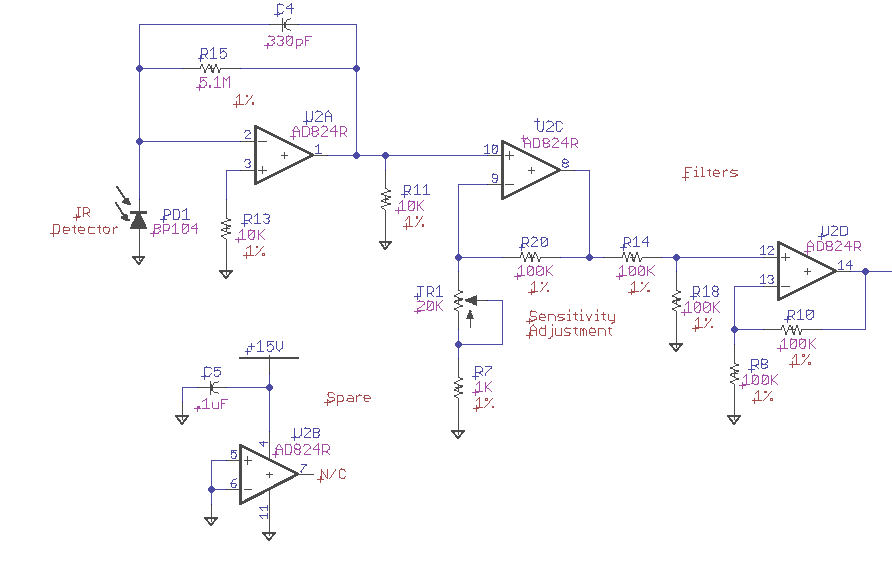 Background info: I'm looking to possibly replicate it with as another detector but am asking questions about the circuit since it was designed way before my time. I'm wondering if my detector should use one Op Amp or use cascading op amps.

I don't see much reason to have it. Perhaps it was once used for "filters" as the annotation suggests.

This circuit could probably be reduced to a single op-amp (with some improvement to the stability).

The only possible reason for the series of op-amps in this set-up could be "filters" in the unity-gain region of the op-amps, but that would not be a very smart way to filter.

It's also possible the U2D has a capacitor somewhere, because the composite maths of filtering in the post-amplifier became too complex for the designer around U2C and it is simply forgotten in the drawing that you have.

As Spehro says it's also possible this capacitor was removed and the schematic updated to the new situation, for servicing reasons.

Any of that is possible, and can only truly be answered with a crystal ball or an original designer.

To quickly rehash my comment: When you use a chip with multiple Op-Amps and you have one of them working with nA-scale currents, so as to need a 5M feedback resistor, you should prefer connecting the op-amp inputs such that the output strongly biasses to one of the rails, to prevent on-chip noise created by the unused op-amp(s). Such as, for example: 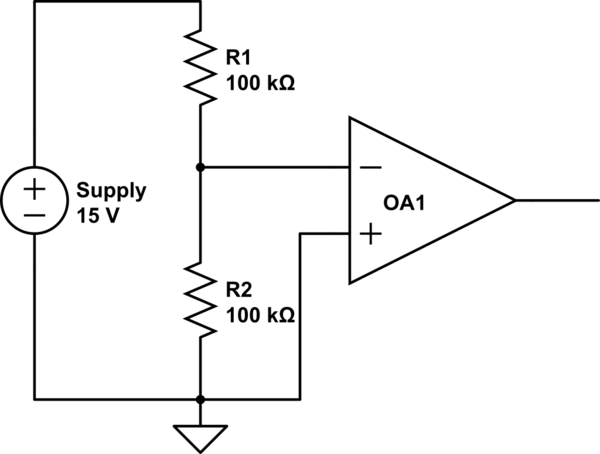 Would always force the op-amp towards the ground rail (often the easiest one for an op-amp) while the circuit is powered.

Whether you will need any active filtering other than the feedback-filtering by the capacitor C4 can only be said with knowledge of the signals coming in, what should go out and what components you're using.

The second op-amp (U2C) may be a valid addition, though possibly with a fixed amplification of 10 to 100 (potentiometers are noisy as well! though to a very limited degree at 20x amplificatoin), to reduce the noise sensitivity of sensor leads or to increase the responsiveness of the total circuit, again depending on the parameters you are designing with.

The best thing to do is to just start working sensibly from what your sensor does towards what you need at your output and leaving what is currently in place out of it, if it uses a different sensor and different tactics from a different time. You can look at some points of the existing system if you can find behaviours that explain this schematic, such as noise or biasing, but if you find none (which I suspect): Start over and be sure to test what you calculate before making it a final part of your legacy.