I have learn from control system that for a stable system gain margin and phase margin both must be positive. That is the truth.

But I have a doubt about this simple third order type 2 open loop transfer function whose phase margin is positive but gain margin is NEGATIVE. But both Nyquist stability criterion and Routh Hurwitz's criterion are showing that the close loop system will be stable.

How is it possible? Am I doing something wrong?

The system is as follows :

I will be very thankful if someone clears my doubt. I have checked the system using MATLAB also.

For a minimum-phase system, the gain and phase margins must be positive for the system to be stable.

This system has two poles at the origin, and hence is not minimum-phase. Thus it can be stable even if the gain or phase margins are negative.

As Vladimir Cravero states in his comment, the Nyquist stability criterion is the one to be trusted. With an s-contour like this one, there are no encirclements of the -1 point and hence the system is stable. (The "cut-out" at 0 avoids crossing the two poles there.) 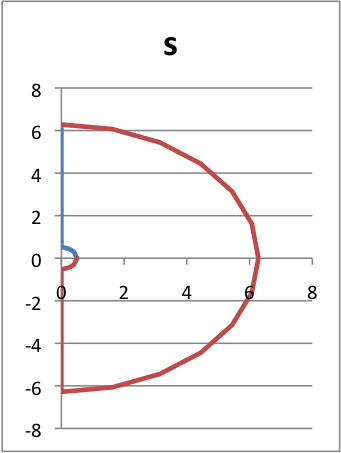 There is actually a term to describe systems like this one with more than 180 degrees of phase lag at low frequencies: "conditionally stable", meaning that, while stable, if the gain K becomes low enough, the system becomes unstable. Conditionally unstable systems are to be avoided where possible, because you never know what may reduce the system gain and get you into trouble.

5
Effect of zeroes in system stability
14
Gain margin and Phase Margin Physical Meaning
6
Why is phase margin considered more important than gain margin in dc-dc converters?
1
Stability and Positive/Negative feedback
2
Phase margin and stability
0
How do I find value of gain that stablizes the system from root locus?
2
Nyquist theory - Control system - Stability
1
How can I calculate gain margin in this transfer function and the constant K?
0
How can gain and phase margin be used to assess stability of SMPCs as for most of the cases (except buck), they always have a Right Hand Zero?