Will this circuit protect my digital IOs from overvoltage conditions?

I have come up with the following circuit to protect my device's IOs from overvoltage conditions. 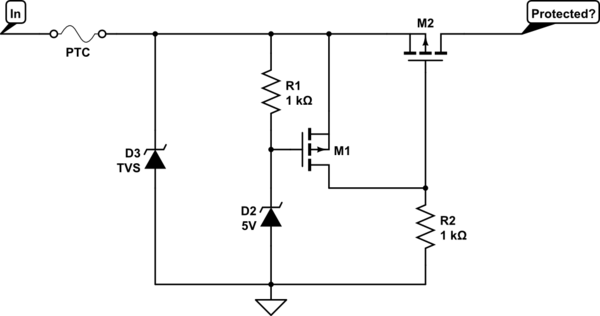 The idea is that as soon as the input voltage is higher than D2's Zener voltage M1 will shorten M2's gate to it's source and disconnect the input from the output.

The main reason for this protection circuit is to protect the rest of the circuit from accidental misconnections (e.g. accidentally connection In to 12V). D3 is there to prevent transient voltages from damaging the circuit.

My question is: Does this work? What happens if the input voltage is less than 0V? I think it also lockout negative voltages which would be desirable, but I am not sure.

I am not too worried about ESDs because they are short and the TVS diode D3 should be able to handle them. My main worry is a high constant voltage (12-24V), when the circuit to be protected is only rated for 5V.

I added a fuse (PTC) to protect against overcurrent, because it has a lower resistance than a series resistor in normal operation. But my main question is still if the cicuit will work as expected or not.

Turns out I didn't have to qorry about the voltage drop across the series resistanse. After simulating it I found that there will be a voltage drop across M2's source and drain if it's drain is connected to ground. Therefore the input voltage can never be pulled low.

If the I/O to be protected is a microcontroller I/O, no your circuit will not protect it very well.

Try simulating this with a fast rise-time 24V with 0.5 ohm series impedance and see what happens. (lower than 0.5 ohm and the PTC will probably not work, depending on its specs).

M1 will only turn on when the input exceeds 5V by a volt or two, at which time your microcontroller is already dead.

If you must have protection of bidirectional I/O I would suggest a couple of BSS139 N-channel MOSFETS back-to-back in series with the input, and a clamp designed to handle maybe some tens of mA per input, whilst keeping the input voltage/current within spec for the micro.

For dedicated inputs, adding a lot of series resistance is easier (or an opto with a bit of protection circuitry).

Be sure to pay attention to possible user-induced faults involving ground. For example, if you have more than one pin connected to ground, the user may connect one pin to +24 and the other to the return. After the trace burns off, the resulting 24V on part of the ground net can have far-reaching and rather sad consequences.

One problem with your design is if the overvoltage exceeds M2's maximum drain-source voltage, M2 won't actually disconnect the circuit.

Another is that when it's tripped, you'll have significant current and significant voltage in D2 and R1 and they'll get hot, and maybe fail.

The canonical solution for non-transient overvoltage protection is a crowbar circuit. This is a circuit which responds to an overvoltage not by attempting to disconnect the load, but instead by throwing a short circuit across the source. The advantage here is the voltage across the crowbar is relatively low, and so there will be less power dissipated in it, which means less heat and less chance of failure of the protection device itself.

Of course this results in drawing a very large current from the source too, so you add a fuse. Hopefully when the crowbar is tripped, it also blows the fuse. The fuse disconnects the load similarly to M2 in your circuit, but has a much higher maximum voltage.

T1 is a thyristor. Normally it does not conduct. When the gate (the lead coming out the side) reaches some threshold voltage above the cathode (on the bottom), the thyristor begins conducting and won't stop until the current through the thyristor (from anode to cathode) decreases below some threshold.

C1 is just there to reduce nuisance tripping.

Accordingly, you'll want to select the fuse and spec the thyristor such that if the fuse doesn't blow, the thyristor won't overheat. This is easier since the voltage across a thyristor in conducting mode is relatively small.

You'll probably want to add to this arrangement a diode across the input which is normally reverse biased, but is forward biased in case the input voltage polarity is backwards. In this case the diode will conduct and either clamp the voltage to a safe level or blow the fuse.

Another option is to not connect the devices at all.

Instead, use an optoisolator. These devices are essentially an LED that shines on a transistor, in a convenient dark box. The light hitting the transistor creates a base current, just like light on a photodiode creates a current.

If there's a very high or prolonged overvoltage fault, then the smoke will probably come out of the optoisolator or the resistor, however damage to the microcontroller is very unlikely. If you think this might happen a lot, put the optoisolator in a socket for easy replacement. They are pretty cheap.

A third option is to just put a large resistor in series with the input. Since the microcontroller's inputs are already very high impedance, this won't make much of a difference under normal circumstances.

Microcontrollers almost always have ESD protection diodes on their inputs which clamp the inputs to within a diode-drop of the power supply rails. So in the case of overvoltage or reverse polarity on the input, one of these diodes will begin to conduct. If there's a resistor in series with the input, then the current through these diodes is limited and no damage is done.

A risk here is latch-up. If you have a current-limited power supply to the microcontroller, the risk of catastrophic failure can be reduced. One way to accomplish this is to power the MCU through a series resistor, shunted by a capacitor. The capacitor will supply the transient switching current for the microcontroller, but in the case of latch-up the resistor will limit the current, hopefully below the threshold of damage.

Usually if the current on the inputs and the power supply is limited, the latch-up won't be able to sustain itself once the fault is removed. 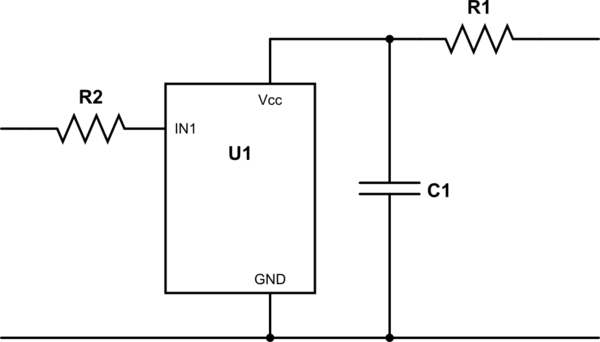 Not the answer you're looking for? Browse other questions tagged circuit-protection pmos or ask your own question.

11
What is the recommended way to protect a circuit from non-transient overvoltage?
1
Input Protection for an Electronic Load
1
What are the correct zener diode and PTC fuse size?
0
How do I protect a sensor IC from overvoltage when not in use?
0
How to protect a 1A 120V circuit breaker from direct short?
0
3V3 uC input protection from higher voltage?
0
Whats the cheapest protection circuit for this test equipment?
5
What could have caused the MOSFET to fail in this high-side switching circuit?