Why isn't this opamp working correctly?

I am working on an adjustable current source. In a thread awhile back, various circuits were discussed:

... but as I have settled on one option, and it's not working correctly, I'm starting a new thread to focus on my conundrum. 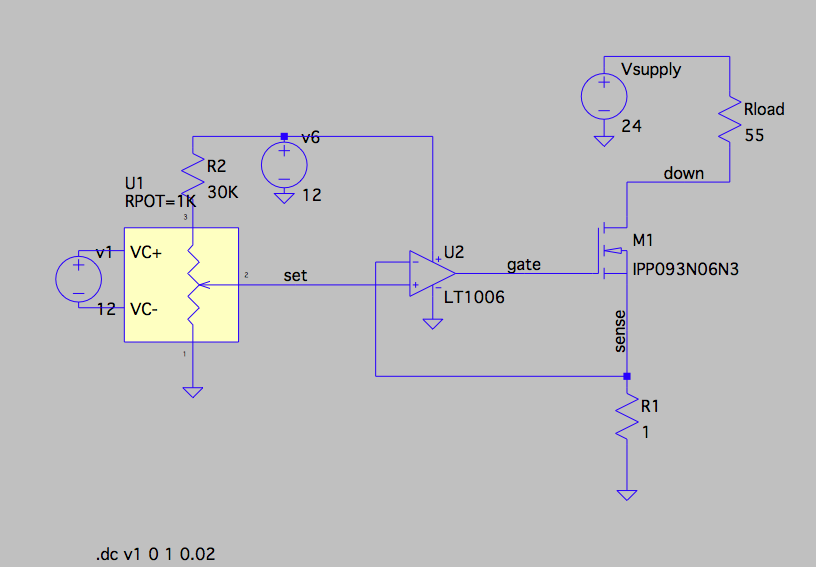 The resistor divider (30K resistor and potentiometer) provide a reference voltage on 'set' (the DC sweep of v1 just rotates the pot shaft). The opamp should servo 'gate' so that 'sense' equals 'set', and thus the current (in milliamps) pulled through the load 'Rload' equals the voltage of 'set' (in millivolts). Simple as that.

The 12v supply which powers the 'set' circuit and the opamp is a 7812 powered off the 24v supply. And the mosfet is actually a FQP10N20C (a fairly vanilla power nfet).

I've simulated with LTspice and it behaves as I'd expect. But on the breadboard, as 'set' is increased from 0 to about 400mV, 'sense' tracks 'set' less and less well. At one point I'm seeing 257mV on 'set' but only 226mV on 'sense'; so only 226mA is flowing through Rload and R1. 'Gate' is at 3.53V and 'down' is at 11.7V. If one just examines the opamp in isolation, it seems that 'gate' should be driven higher (until, presumably, at some point enough current flows that 'sense' equals 257mV).

The opamp is meant to be used with a single-ended supply, and should easily be able to drive its output above 3.53V (with a 12V supply voltage). The gate of the FET should not be sinking any current (verified with meter).

The problem is evidently that there is some sort of oscillation on the output of the opamp. Putting a 10uF capacitor on the 'gate' node more or less fixed the problem, but putting a 1K resistor between the opamp output and the fet gate doesn't help much. I'm now seeing no more than about 7mv discrepancy between 'sense' and 'set', over the whole current adjustment range (now 0 to 300ma) and a voltage (required to drive that current through the load) between about 3 and 23v.

I only saw this question just now, and your answer that the opamp was oscillating. That was my first guess from the schematic and the symptoms.

However, I don't like the way you fixed it. Simply loading the opamp output with a lot of capacitance may work now in this case at this temperature, with this phase of the moon. It may not work with the same model opamp from a different batch or some future batch.

A better solution is to put a little resistance in the feedback path, between the top of the current sense resistor and the negative opamp input. Then add a small compensation capacitor directly from the opamp output to the negative input. The cap provides immediate negative AC feedback to keep the amp stable. The resistor raises the impedance of the signal so that the cap can have some effect without having to be too big for other considerations. Try 1 kΩ and maybe 100 pF. You can use a larger capacitor if response time doesn't need to be fast and you want to err on the side of more stability.

I hadn't looked at the datasheet of the opamp before, and just answered for a ordinary opamp. The LT1006 is optimized for very low offset voltage and low power. That means compromises were made in other areas. One of those is apparently stability. The datasheet does show the amp used as a unity-gain voltage follower, so it is apparently unity-gain stable.

However, look carefully at the typical application schematics on page 11. Note how one has 1 kΩ in series with a 680 nF compensation capacitor, and the other 2 kΩ with 330 nF compensation. This means my guess above of 1 kΩ and 100 pF was way too little. Try a combination more like what they use. Since you've already got 1 kΩ series resistance, try 1 µF directly between the opamp output and the negative input.

The other thing you need to do is actually look at the signal over time, not its average voltage. Put a scope on it already and see what's really going on.

I recently came back to this project after a hiatus, and continued to have troubles with the stability of the opamp. However, I've discovered there's a simpler solution to the problem, the linear regulator LT3080; it essentially integrates the op-amp and power-transistor of my original circuit, and seems to be very stable in my testing.

My new circuit is essentially that shown in the figure titled "Low Dropout Voltage LED Driver" on p.17 of the datasheet. But instead of putting a fixed resistor from the SET pin to GND, I drive a variable voltage into the SET pin (one could also use a variable resistor, but a voltage works better for my application). The voltage signal simply needs to be able to sink the 10ua of the internal current source.

Not the answer you're looking for? Browse other questions tagged operational-amplifier current-source single-supply-op-amp or ask your own question.

4
MOSFET - OPAMP circuit
3
Is it possible to construct a voltage doubler that both powers an opamp and is driven by it?
1
Opamp Misbehaving in Constant Current Source Circuit
1
What OpAmp configuration is used in this circuit?
5
Unstable Feedback in Opamp+MOSFET circuit for Voltage Controlled Current Source
0
Opamp Vos trimming in a single supply circuit
0
Using built-in current limiting of an OpAmp to create a current source
3
Opamp output current
2
Current limiting source using opamp
0
Single supply opamp colpitts oscillator