I'm new to making circuits (and electricity in general), let's say I make something which require 3 volts, if I use a 9 volt battery with 750 mAh, when I lower the voltage down, will I increase my device run time? And would something as simple as a resistor do that?

Note: I know I shouldn't lower the voltage with a resistor, I just would like to know if it would have the same effect as a step-down voltage regulator

The answer is yes, if you use a switching, or buck, regulator.

A series resistor will not be efficient. It's current in = current out, so going from 9v to 3v will only be 33% efficient. Most linear regulators will be slightly worse, as they waste a little bit of current to ground as well.

It's worth reading the battery data sheet, for example Energizer522 9V Alkaline Battery. It's a little bit cryptic, but there is a chart of Miliamp-Hours capacity. 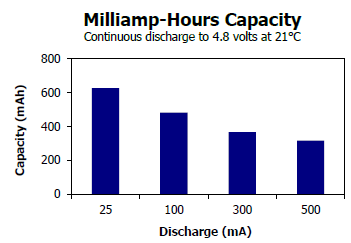 Surprise! The mAh capacity is not really a constant: at higher discharge current, the mAh capacity decreases. So 750mAh is just a heuristic for estimating runtime based on relatively low current, for a generic 9V battery. However it's mostly pretty constant, over a reasonable operating range. (If you draw 1000's of mA, like arc welding with a battery, the mAh rating may not track. I don't recommend this, electrical fires are not fun. Consumer 9V batteries are almost safe but rechargeable batteries can be a lot more hazardous.)

Note that the mAh capacity chart on this particular battery datasheet says "continuous discharge to 4.8 volts at 21 degrees C". They have to specify the end-of-discharge voltage, because the battery won't run down to 0 volts. As the battery discharges, the internal source resistance increases, and less voltage appears across the terminals. At some point there is more source resistance than load resistance, and more of the battery's remaining energy goes toward heating up the battery than actually driving the load. Some loads can ride the battery's discharge curve down lower than others. A flashlight might be able to run on a battery that's too dead to power a motor.

There are runtime graphs that show service hours (runtime) for two different scenarios, a constant resistance load (where load current decreases as the voltage decreases), and a constant current load. If you are using a 3V low-dropout linear regulator, your load current will be approximately constant, so the constant current performance graph is applicable. Again, note that they specify this is at room temperature. One gotcha is that if you are drawing 300mA out of the battery, it's not going to stay at room temperature, it will get warm, maybe even hot.

Another consideration besides total service hours, is how rapidly the battery declines when it reaches end of discharge. This is one of those system characteristics that depends on both the battery and the load. Take a look at the industry standard tests graphs at the end of that data sheet. These are three different typical use cases for the 9V battery, with the radio and the toy being continuous discharge and the smoke detector using a sleep mode to keep its average load current low. If you were designing a consumer electronic product, one of the tasks would be investigating the load characteristics and battery discharge for your particular product. For a hobby or a first prototype the graph in the datasheet is a place to start.

If your device is a handheld remote control, and the battery stops working, it's pretty easy for the user to swap in a fresh battery. But if your device was a quadcopter drone, and its battery suddenly stopped working when the quadcopter was a few hundred feet in the air, that would be bad. You'd want some early warning that the battery was reaching the end of its useful life, to avoid a damaging crash. Similarly if your device was writing data to an SD card or other media, you'd want to try to avoid getting caught in the middle of a commit with a suddenly dead battery. So you'd want to be testing the battery voltage, either measuring with an ADC or using a high-impedance voltage divider and a comparator, to detect when the battery voltage is getting low enough for your device to be concerned. And if using a microcontroller, an undervoltage lockout circuit (often built into the microcontroller) prevents the microcontroller from doing anything if the supply voltage is out of spec.

It depends on the nature of your load.

IF you have a resistive load such as a tungsten filament torch bulb then adding the resistor will make the battery last for longer because the bulb burns less brightly, drawing less I. A switching regulator to buck down the dc voltage helps even more.

IF you have a modern load with its own internal regulator such as a "12 V" bit of computer equipment, that will draw its required power IV, so if you give it less V by inserting a resistor then it will draw more I to make up its power use and deplete your battery SOONER than without the resistor. Inserting a buck dc downconverter switching regulator won't help, because the IV out of it is not more than the IV into it.

So, you asked a reasonable question but you also need to describe whether your load is "resistive" or "constant power" or something else before you can have a straight answer.

The question is confusing because even though the terms used are well defined, they are not always well understood.

Voltage and current do not interact in the sense that one can fill the gap left by another, but batteries do behave differently than resistors because they have a chemical part which is consumed as current is drawn. Importantly, current and voltage apply a a specific point in a circuit, and at a specific time.

For a battery, the mAh rating is an approximation of the stored energy which can be extracted before the battery is spent. Starting at 9V, once you've extracted 100mA for 7.5 hours, maybe the battery voltage will be 8V, and 10 minutes later it will be 6V (hypothetically). You extracted 7.5*0.1*8.5=6.375 Watt-hours from the battery.

With your circuit, you can trade off the operating voltage, and the current draw (depending what the circuit is), but you end up with a specific power consumption (say, 3V 100mA, 0.3W). You can't relate this yet to the energy available from the battery because we know your circuit will not work as you expect when you connect it to 9V rather than 3V.

If you use a switching regulator, the regulator acts more as a variable transformer (a weak analogy, I know). The input current will be maybe 35mA at 9V, and the output current 100mA. In this case, the approximate calculations are simplified by using an efficiency number for the regulator. If the regulator is 95% efficient, it consumes only about 0.3 Watt-hours of the battery's stored energy.

In summary, the only thing that affects running time of a battery is the current you draw from it over time. Higher current also stresses the chemical side of the battery more (as a secondary effect). Unless you can match the battery voltage directly to your circuit voltage, you will need to waste some energy in a regulator. Generally, linear regulators or resistors only make sense (for efficiency) if the voltage mismatch is very small since modern switching regulators are both cheap and efficient.

With the resistive voltage divider 2/3 of the battery power will be wasted in the voltage dropping resistor. This would not be considered efficient!

For a resistive load (a load that behaves like a resistor) such as a light bulb a voltage dropping resistor may work well enough to give the 3 V required. Since the two resistors remain constant in value, the voltage at their junction will remain constant. This principle is used all the time in electronics but mostly only at low power.

For sensitive loads a voltage regulator should be used.

A linear voltage regulator replaces your in-line resistor with a transistorised device which adjusts it's resistance to give a constant output voltage. This would solve your voltage regulation problem but dowsn't solve your effficiency problem. In your application the efficiency would still be 3/9 = 33%.

A switching voltage regulator is much more efficient. The output voltage is switched between full (9 V in your case) and zero at high frequency and smoothed out to give a constant voltage DC. To reduce the voltage from 9 V to 3 V the output pulses would be on for about 1/3 of the time. With a good design efficiencies greater than 85% can be achieved.

where \$ \eta \$ (eta) is the regulator efficiency. Load (W) is calculated by multiplying load voltage by load current.

For example, if your load averaged 100 mA at 3 V and your regulator is 85% efficient then

Not the answer you're looking for? Browse other questions tagged voltage current voltage-regulator or ask your own question.

2
How to make 95%+ efficiency voltage regulator?
0
HIH-4000 maximum voltage in concern
1
Does AMP AC/DC adapter going through a step down increase in amps per voltages (ECIG)
1
LM317 Maida Style regulator
1
Are there constant voltage regulators regulating up and down for variable input?
0
Reliably using motor at higher than normal voltage
1
If I lower the volts on a computer fan will the needed amps increase? Im new too electrical engineering (updated)
0
Correct power supply for my project