I am thinking of making my own LED lamp - That is, have an array of LEDs and power them off, maybe, a battery pack? The power source I am lenient, I'll solve that issue when I get to it. My main question is regarding the LEDs

Is it more efficient to individually solder, say, 20 or 50 individual 5mm LEDs like these:

Or should I simply buy a LED Strip and break it up into little strips and slap them onto a template?

My main concern is energy consumption - the LED strip requires 12v, whereas the individual LEDs require 3.2-3.4v. Since I will be powering them off lithium ion batteries, each battery has a range between 4.2v and 3.2v. I will be regulating the voltage with a buck boost converter. TO power the individual LEDs, I'll need only one battery, whereas for the 12v I will need multiple batteries so that they are not stressed.

As well, are LED strips generally brighter than the individual LEDs, which are 15,000mCD each?

The answer is "it depends".

If you want a flashlight, with a nice beam, then you need optics, thus it is much easier to use one high-power LED so only have to purchase one optic (lens or reflector).

If you want diffused light, then having many light sources (many LEDs) is easier to work with.

Now, if you use batteries, you'll be interested in the efficiency of your LEDs (ie, lumens/W) to maximize battery life. So you need to be aware of that. There is a compromise though, as LEDs with pleasant warm light and good color rendition tend to be less efficient. Very high lumens/W LEDs are usually "cool white" and low-CRI which isn't that good for stuff like reading or ambient light.

As well, are LED strips generally brighter than the individual LEDs, which are 15,000mCD each?

mcd (tmillicandela) has nothing to do with light output. A candela is a lumen per steradian, the latter being a unit of ANGLE. This means the same LED chip, which puts out the same amount of light (lumens) can be 100 mcd or 10000 mcd depending on how the optic in front concentrates the light into a wide or tight beam. If you want to make a lamp for diffuse ambient light, you need low-mcd, high lumen LEDs.

W is power, not Whr which is energy.

Now, DO NOT wires your LEDs in parallel. Since all LEDs have a bit different voltage drops, the one with the lowest voltage drop will hog all the current, then burn. Then the next one will hog the current... etc.

If you got many LEDs, you need to put them in strings with resistors to equalize the current. Or use only 1-3 high power LED.

Losing less power on the resistor means putting more LEDs in series (ie, using higher voltage) but if you start from one 3.6V LiIon cell, boosting above 12V will also be less efficient. So 12V is OK.

12V LED strips will lose some power on the resistor. 3 high power LEDs in series will not (but may be more cumbersome to use, your choice).

if I were you I would make something like this: 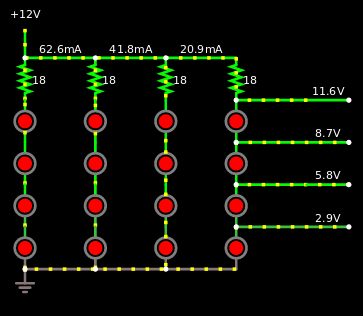 Here's a link if you want to play around

I reread your question and saw that you said the LED strips needed 12V. That it was not your battery that delivered that. Your battery delivered 4.2V - 3.2V.

In that case this schematic would be much more viable: 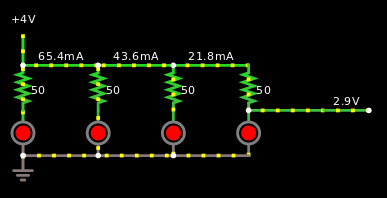 Here's a link if you want to play around

Let's compare how bad it is to use current limiting resistors instead of using a buck converter or boost converter. Assume that a X converter is 80% efficient. Let's also assume that you will use 4 LED's like in the schematic above.

Not the answer you're looking for? Browse other questions tagged led low-power led-strip or ask your own question.

1
Cuttable 12V LED strip
0
Clarification on LED strip specifications
1
LED strip underwater
1
Controlling individual LED strips of different kinds and lengths with a single microcontroller
0
DotStar Micro LED Strip individual capacitor need and PCB questions
4
DIY LED lamp is less powerful than expected
1
Help with powering LED strips from a LED TV
1
How to wire LED strips into my display cabinet?
0
How individual LEDs in LED strips (or matrixes or cubes) are being powered when supplied with >=12V instead of 5V?