Questions on interfacing circuit for an NPN input

I have to use this sinewave outputting sensor with the NPN input of this converter. My previous question was related to the same issue but the question was about a totally different circuit design i.e. a single CE amplifier. Even the circuit was working in practice, from many expert comments I was suggested to make an interface with a comparator instead and use voltage protection.

Input is a sensor which outputs sine waves from 200mVpp to 12Vpp between 1Hz upto 100Hz. The circuit below I aim to convert these sinusoidal inputs to pulses and via comparator's open collector I want to pull down NPN input (Y1) of the F2V converter. Output impedance of Y1 is not given so I measured it with different resistors as around 2k (R1 in the circuit).

In simulation I get the following voltage output at Y1:

It seems this works in simulation for the desired input ranges.

Is my way of driving this sensor to the converter correct? Can this circuit be optimized or improved? Are the locations of TVS and diodes correct? I'm just wondering if there is fundamental error before I start soldering. 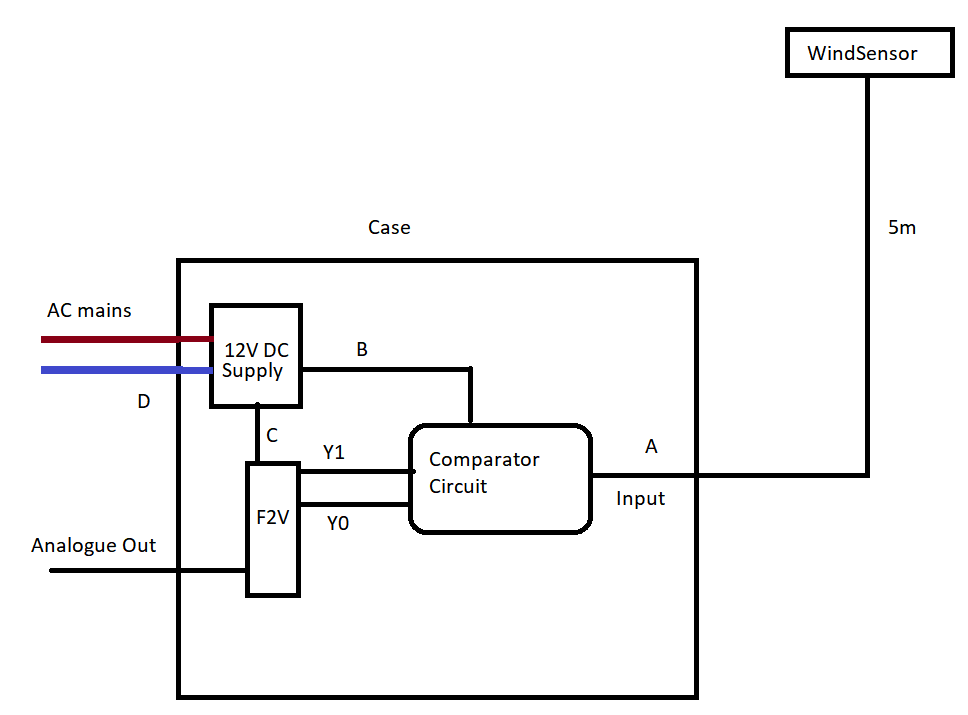 Above is how I'm going to configure the setup. The points A, B, C and D are in question for protection. I was only thinking for the moment MOV or TVS for the point A.

I apply this noisy signal as an input to both:

From these, I conclude that there is no particular reason to complicate what's needed by adding a separate power supply if it is possible to instead power the circuit directly from the PXF-20.

I think that's possible with a fairly simple circuit.

Now, the right side is powered and when the anemometer generates even a small signal the remaining circuit will alternately release and then drive the Darlington pair, \$Q_4\$ and \$Q_5\$, allowing \$Y_1\$ to rise well above the \$7.5\:\textrm{V}\$ threshold and fall well below the \$5\:\textrm{V}\$ as the small AC signal continues. This will work with even a small AC input, but it will also work with the higher generated voltages, too.

There is no lightning protection here! Just be aware.

I've made some assumptions that are possibly unwarranted about your anemometer. If I had it here, I could do some testing on it. But I don't. I'm guessing that the wire resistance alone is at least \$300\:\Omega\$ in the wound coil. I honestly don't actually know, though. But I think the circuit is worth a shot.

Mostly, this is to help you consider the idea of a self-powered circuit and show you one of the simpler (but less accurate) ways to approach solving that problem when interfacing an anemometer like this. It takes advantage of the provided current source and provides signal conditioning sufficient perhaps to drive the \$Y_1\$ input, as well.

I'm a little more worried about the slower anemometer speeds because of the tiny AC voltages generated. If that's still a problem more can be done, of course. You might try and change the value of \$R_6\$ a bit, one way or another, and see how that adjusts things better. But you'd probably need an oscilloscope tied to \$Y_1\$ and grounded at \$Y_0\$ to know better, then.

By the way, if you want to try and simulate your permanent magnet anemometer you might look over "Permanent Magnet Synchronous Machine Model for Real-Time Simulation" to see what I had to play with in trying to make sure the circuit I provided had a shot at working. I was able to get a behavior that relatively closely mimics the specifications provided by the anemometer datasheet, where merely changing the rate also changes the voltage approximately in the way they said it did. But it was annoying to develop and it's non-trivial. But it gave me a little better confidence that the circuit might work well, too. Worth a moment's trouble.

Not the answer you're looking for? Browse other questions tagged analog signal-processing comparator npn or ask your own question.

2
Questions regarding BJT saturation for a circuit