Charge pump to a specific potential somewhere else in the circuit

Just for context: The original problem I was originally trying to solve was measuring current through a shunt whose voltage potential may be outside the range of my control circuit's supply voltage. 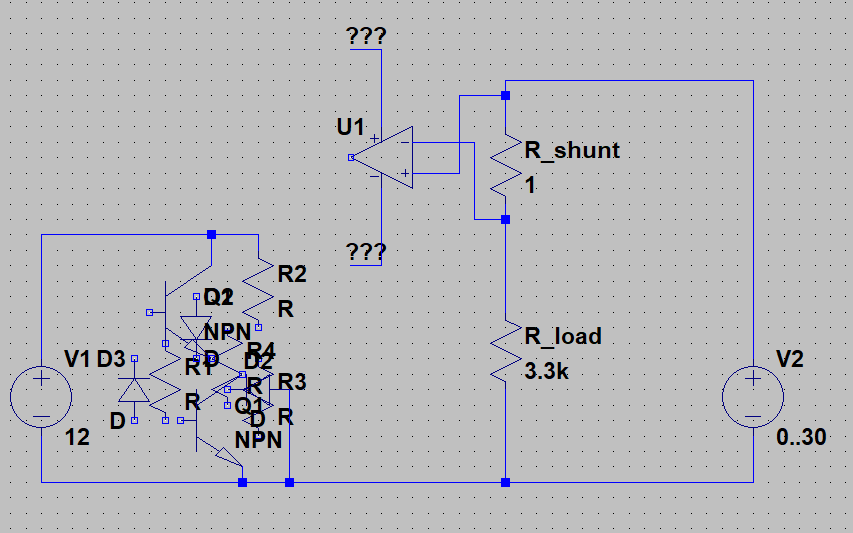 Here, the control circuit on the left runs on 12 V DC, however the potential where I'm trying to measure may be in the range 0 .. 30 V DC. Even if I were to use an amp with rail-to-rail inputs I still wouldn't trust the circuit without any headroom, and also the load voltage (V2) might be less than the minimum supply voltage of the amp.

So first I thought measuring current with a shunt that is at a different potential than the control circuit must be extremely difficult, then I wondered how a multimeter even measures anything - well I suppose the battery doesn't care much what it's absolute potential is, even just connecting the ground of a 9V block to the node between R_shunt and R_load probably would have been enough. But I don't want a battery there, so I thought about how I could somehow move voltage from the control circuit on top of the load circuit.

Regardless of whether the original problem could be solved in a better way, I decided to try this approach for educational reasons. By chance, I read in the datasheet of some power H-bridge IC that it uses a charge pump to drive the high side MOSFETs of the H-bridge because it has a similar problem. The charge pump inspired this kind-of DC-DC-converter-like thing:

The thing is at this point I'm completely over my head. I haven't found any information on this arrangement (also I don't really know what to google for). From that I assume that other people may have done this before and decided that it's a terrible idea and I'm definitely going to shoot myself in the foot.

Is this a legitimate approach? If not, what is a viable alternative?

Firstly a multimeter is a simple Wein bridge circuit, however It all depends on what you are measuring, if unknown an opto isolator could be used in the feedback circuit of an op amp, the output being given by the amount of feedback. You should look at charge pump ccts to gain more insight https://www.maximintegrated.com/en/app-notes/index.mvp/id/725

Not the answer you're looking for? Browse other questions tagged analog dc-dc-converter current-measurement charge-pump or ask your own question.