What is problem with NRZ and how manchester line coding handles out of sync tx and rx clocks.?

I am reading about physical layer of the OSI model. Specifically the different ways in which digital bits can be represented as voltage levels, among the multiple types are:

My understanding of NRZ encoding, when both tx and rx clock are synchronized, is as follows:

It is stated that tx and rx clocks might go out of sync in which case NRZ encoding will have issues when decoding long strings of 0's (or) 1's, and manchester encoding addresses this problem.

I am having hard time understanding the logic. A picture is worth a thousand words, so can you please help me understand this with a clock /signal diagram that shows.

In simple terms, with NRZ encoding and reception, unless you have perfectly synchronous clocks at both ends it won't handle long periods of logic 1 or logic 0 being transmitted. This is because one clock will drift relative to the other and therefore you are limited to how many successive 1's or 0's that can be adequately decoded before the clocks get out of sync and a bit is lost. If the data is changing quite often, then the receiver can re-sync its locally-generated clock on the edges of data changes.

With NRZ decoding, consider the problem that a UART faces in syncing its clock to the transmit clock. The top part of the diagram is when the receiver clock rate is pretty much 16x the transmitter bit rate: - 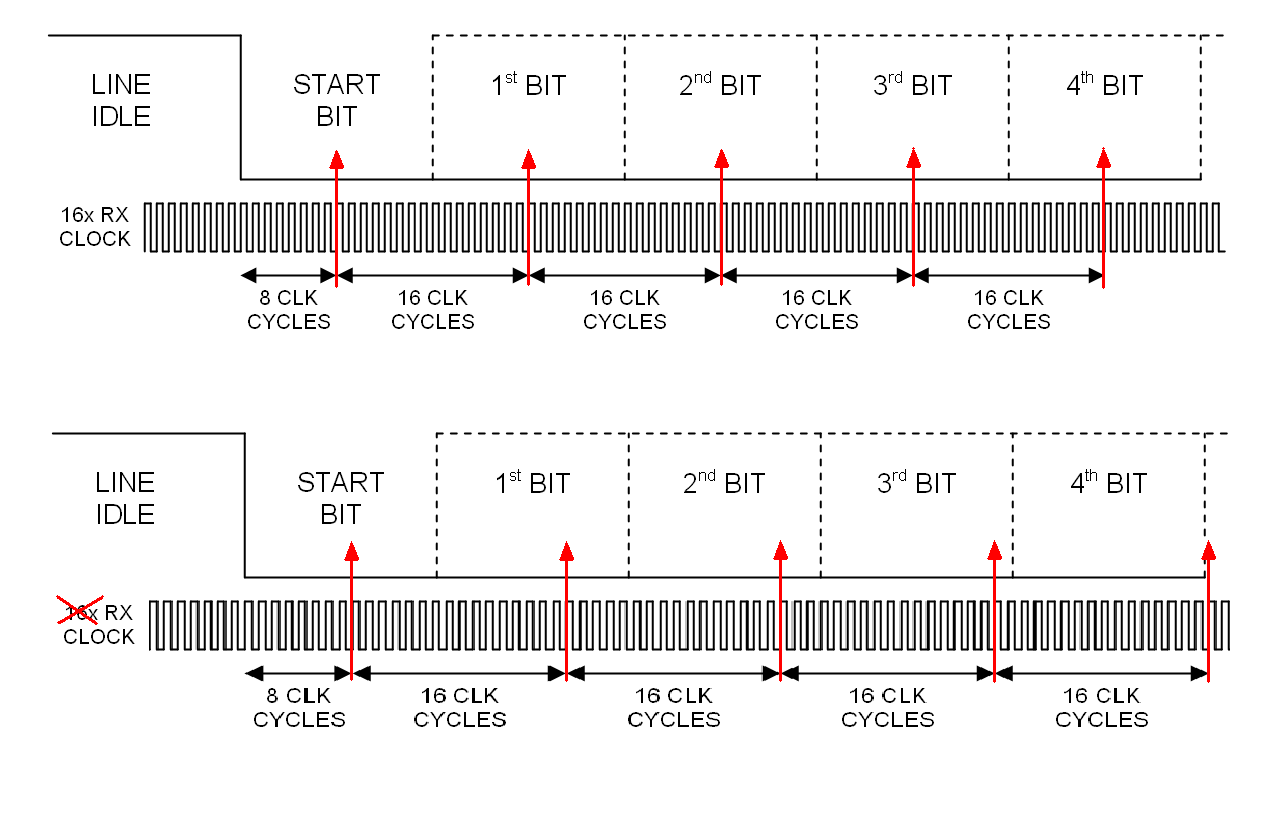 The bottom part of the picture shows what happens when the receiver clock rate is too slow (for example).

Normally, the UART receiver runs a clock that is close-to 16x higher than the baud rate. In a perfect situation, after receiving the leading edge of a transmission (the start bit is always low), the receiver counts out 8 cycles of its internal clock to estimate the mid bit position. It then "samples" the data and restarts its clock from this point so that it can count another 16 to get the mid-bit position of the 1st bit.

If the data is low all the way through the transmitted UART byte then providing the receiver clock doesn't drift off too much then the last bit (D7) will be sampled mid-bit and all is well.

However if the basic receiver clock is not well matched at 16x the transmit baud rate, then you could miss a bit or count an extra bit. This problem is compounded if the word length is longer than 8 bits (plus start bit and stop bit). Mitigation comes from the fact that data doesn't always remain at 1 or 0 and the receiver can resync its sampling by counting 8 from any data edge.

Not the answer you're looking for? Browse other questions tagged communication clock tcp-ip encoding networking or ask your own question.

180
USART, UART, RS232, USB, SPI, I2C, TTL, etc. what are all of these and how do they relate to each other?
7
What is the best way to layout a PCB with crystal oscillators and MCU?
1
What happen if 0 and 1 are transmitted simultaneously with BPSK?
1
How do you design a circuit to implement the Bipolar Line coding Technique?
0
How to represent binary for differential and Menchester coding?
2
How to use 1PPS to Synchronize ESP32 Clocks and Peripherals
1
How to design Power Line communication with line transceivers?