Why doesn’t a resistor drop all of the voltage in a series circuit?

I feel like there is one more thing that I really need to get a grasp of.

Let’s say I have a circuit with a 5V battery and a LED that has a 3V forward voltage. Then before the LED is a resistor with say 100 ohms, the resistor should drop all of the voltage, should it not?

Then we can figure out the the voltage drop across the LED,

Explanation: So, my math shows that the voltage drops completely along the resistor. But if you build this circuit the LED still lights up.

Question: So How/Why Does This Happen?

Edit: then you make sure that the resulting current is within that broad range where you can expect a 3V drop -- there's some (really) lower limit where more current will flow through parasitic parallel resistances than through the junction, and a high limit where the diode will burn up.

If you put 0 V across an LED, then 0 amps will flow through it. If it's in series with the resistor, though, it must have the same current as the resistor. The current can't be both 50 mA and 0 at the same time. So this is obviously not the right answer.

Like any diode, for a wide range of currents, the voltage will be pretty close to the specified forward voltage. In your case that's 3 V. So there's 2 V left for the resistor. 2 V / 100 ohms = 20 mA, and this is pretty close to what you'll measure.

The difference will be because the LED forward voltage isn't always exactly 3 V. It will change due to operating temperature, and increase slightly as the forward current increases.

Here is a graphical explanation 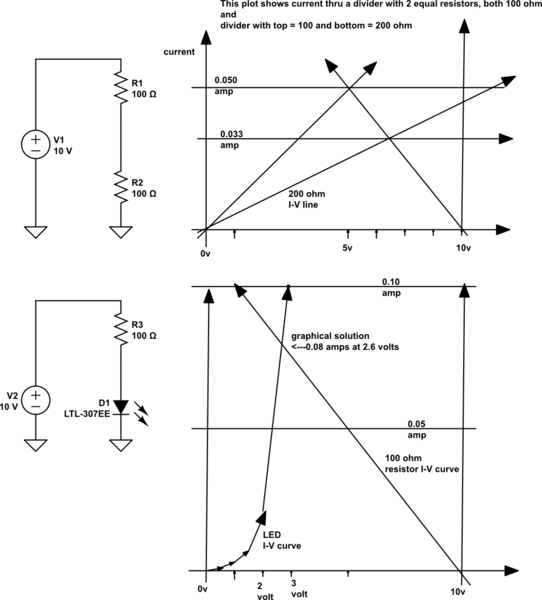 First off, on the practical issue of how to set up an LED, let's not forget that this is usually a straightforward matter. The original question is why doesn't all the voltage drop over the resistor. And that is a deeper question than what resistance should be put in series.

So, as to the practical issue. Current running through an LED will induce a voltage across the device. LEDs have the behavior that the voltage developed across the device stays about the same regardless of current, roughly about 2 Volts. So they don't as like a resistor, where voltage is directly proportional to current. The rules of circuit analysis is that voltage drops across the circuit equal to the supply voltage. Another rule of thumb is run your LEDs at 10 mA. Thus, a resistor and LED in series with a 5V supply will have 2V across the LED and the Voltage across the resistor will have to be 3V. (3+2=5). Since there will be 3V across the resistor and you want 10 mA running through the circuit, E=IR; 3=0.010R; R=300. So with 5 volt circuits you see the experimenter with 330 1/8 Watt resistors, since 330 is a standard resistor value. If you go with more modern 3-3.2 V logic, you will want 100 Ohm resistors. The 10 mA drive current is selected because it gives LEDs are usually bright enough at that drive and 10 mA is way below the absolute maximum of 20mA, which is how a lot of LEDs are rated. This will work any of the colored LEDs you want.

The nature of the LED is to maintain a roughly constant voltage regardless of current. This is true of any diode which is forward biased and with current flowing. This forward voltage drop is a relative constant regardless of current. The LED is special because it glows! But is just a forward biased diode in usual use. If you wanted you could build a rectifier out of one, but they aren't too useful as a rectifier due to the high voltage drop and limited current flow. That doesn't mean there is no resistance. After all, if an LED has 2V over it and it is passing 10mA, it is acting as if it has a resistance of 200 Ohms. t is interesting that if you drop the current to 5 mA the voltage is still about 2V, so the LED is acting like a 400 Ohm resistor. That's right, the LED acts like a variable resistor serving to maintain voltage over the device at about 2V.

There have been some simplifications in the above discussion. In truth, the forward voltage increases slightly as current increases. At a current of 0.1mA forward voltage is 1.7V, 1mA/1.8V, 10mA/1.9V in one datasheet I pulled up. Also, the forward voltage can vary quite a bit, from 2V to up to 3V in some LEDs even with the same part number. The rule of thumb of driving the LED at 1/2 to 3/4 maximum current generally gives satisfactory results and long life.

Not the answer you're looking for? Browse other questions tagged voltage resistance or ask your own question.

8
Changing the resistor to be in front or behind an LED doesn't affect brightness?
3
Does the resistor have to be before or after the component

11
Voltage drops and current for LED?
13
How does the current limiting resistor for an LED affect current and voltage drops?
8
What would the current be if I plug an LED into a perfect circuit
2
Not understanding Forward Voltage and Voltage Drop
3
Calculating forward voltage for a string of fairy lights: multimeter shows “1”
0
Basic resistor question for parallel LED circuit
0
Calculating the resistor needed for a simple LED and battery circuit
2
Voltage drop across a single resistor and across two resistors