I need to generate a negative voltage of approximately -12V from a 12V power supply. I read about ICL7660A that performs supply voltage conversions from positive to negative for an input range of +1.5V to +12.0V resulting in complementary output voltages of -1.5V to -12.0V. I need it to feed NE5532 OPAMPs symmetrically to perform a low pass filter, to transform a square wave into a sine wave. 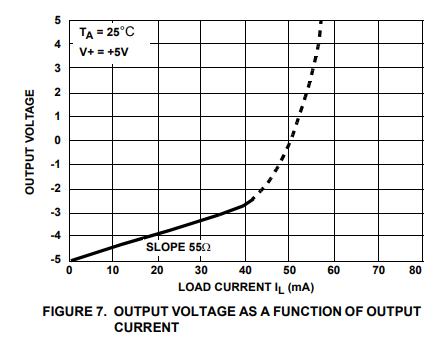 I don't know exactly how much current will be required, but there are 4 NE5532 OPAMPs. I suppose that something near 50 mA is enough, no more than that.

So, I was thinking: I need -12V from a 12V power supply, is it possible? If not, is there a better approach?

power-supply voltage-regulator analog dc-dc-converter negative-voltage
Share
Improve this question
edited May 7 '19 at 11:41
Daniel
asked May 6 '19 at 13:34

The NE5532 typically need about 8mA each.

You could make a simple circuit to generate a slightly more powerful -12 V line: 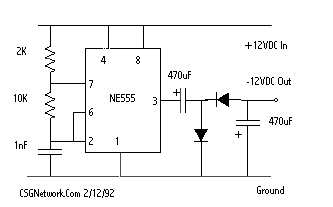 Note that this negative rail isn't regulated and the voltage will drop when loaded.

Depending on your circuit, this could suffice, the opamps might have enough supply rejection.

If you want a "better" -12 V I would simply use an isolated DCDC converter and then connect its output such that you get a -12 V.

For example use an isolated DCDC converter like this.

There is a 5 V in to 12 V out isolated output model. Then you do need to add a voltage regulator to make +5 V from your +12 V as the DCDC converter is a boost converter, it need to start with less than 12 V.

This solution is not that efficient (some power is lost) but since your power consumption is low that should not be a serious issue.

The Buck-boost converter inverts the output voltage to negative. The you get both palarities.

Not the answer you're looking for? Browse other questions tagged power-supply voltage-regulator analog dc-dc-converter negative-voltage or ask your own question.

13
Negative Inductance and Cascaded DC/DC Converter Instability
2
What's the most efficient way to derive negative voltage for a bench power supply?
26
What is the usage of the negative voltages on a PC motherboard?
0
Step-up converter generating too much voltage
3
Why my boost converter is not working?
1
Step down switcher and voltage drop
2
What is the most painless way to get a high current negative voltage power supply from a positive?
3
Can the ADS1118 ADC converter accurately read a voltage close to GND?
2
Offsetting Op-Amp output offset in combination with charge pump