How current is steady after pinch off voltage?

If the depletion region is closed by Voltage between drain and source then what is the role of voltage between gate and source. Although I can see the steady current value is changed at different Voltage gate to source and a logic of faster build of depletion region (Through Voltage to Source and Drain to source) also comes in mind but what is the main logic behind it ?

Before replying please consider me as basic learner. Thanks

Here is my short (simplified, but clear and descriptive) answer:

With rising Vds the channel becomes smaller and smaller - and the corresponding channel resistance Rds is increasing continuosly. Therefore, and due to the geometrical properties of the device, the ratio Vds/Rds (which is identical to the current Id) is nearly constant.

To answer this question, it is necessary first to recall the form of the current density in a semiconductor device according to the customary Drift-Diffusion model, then to see what's happen precisely in a JFET: I apologize for not being elementary, but the answer requires some concepts which, I hope, I'll made understandable.

The current density across the channel transversal section of a JFET. Since the JFET, as all Field Effect devices, is a majority carrier device, let's consider a \$n\$-channel JFET and see that the biggest contribution to the current density is due only to the motion of electrons (call it \$J_n\$), which has the following form $$ J_n=\underbrace{q\mu_n nE}_\text{Drift}+ \underbrace{qD_n\nabla n}_\text{Diffusion}\label{1}\tag{1} $$ where

The current density consist of two contribution of very different nature. Without giving too many details, we can say that the drift term at the right side of equation \eqref{1} identifies a ohmic (i.e. resistive) contribution since is proportional to the electric field (and thus the the voltage applied to the device) and its magnitude depends on the availability of electrons and thus on the magnitude of \$n\$ in a given region. On the other hand, the diffusion term is proportional to the magnitude of variation of the charge density \$n\$ trough its gradient \$\nabla n\$, and not on the magnitude of \$n\$ itself.

What happens in a JFET at Pinch OFF? Let's consider the qualitative behavior of the current conduction by using the following picture, where it is supposed \$V_{GS}=0\mathrm{V}\$ for simplicity and without restriction to generality. 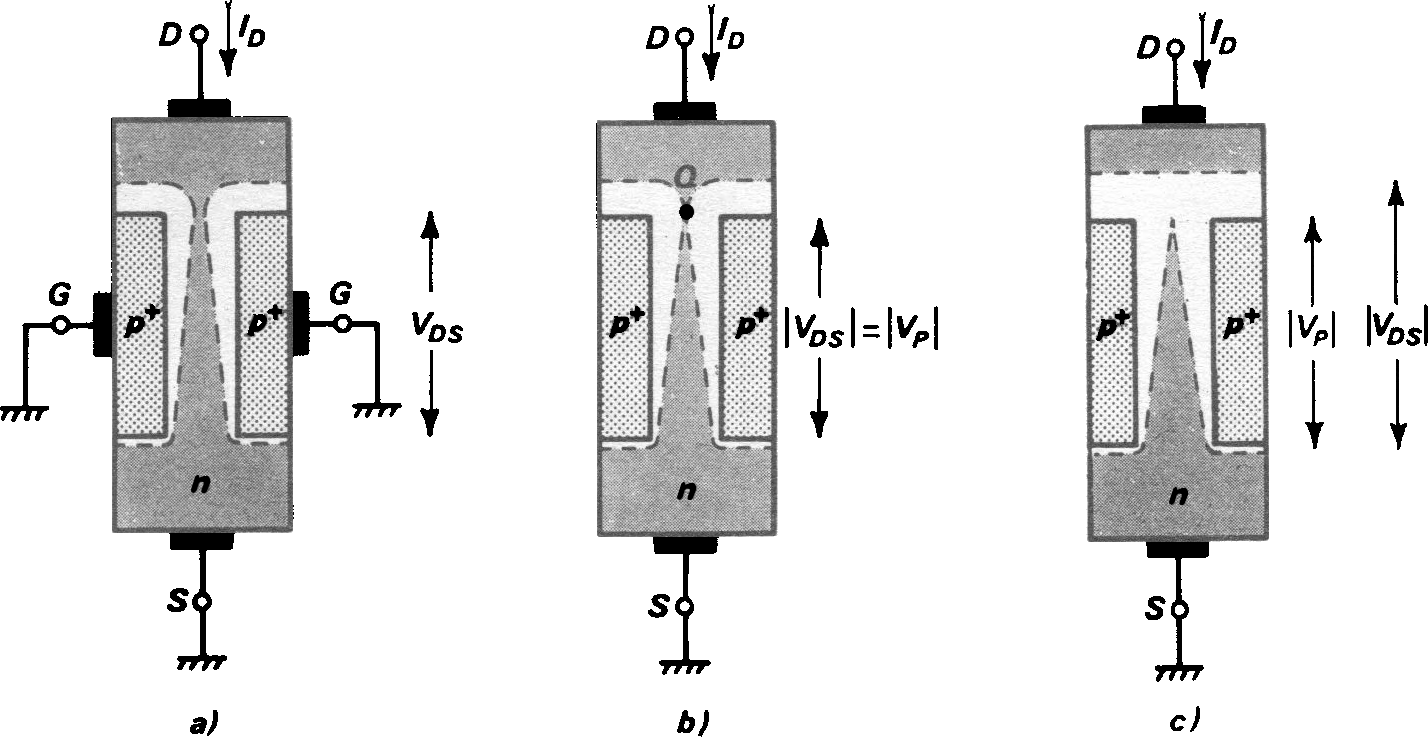 Let's call \$V_P\equiv V_{GS_\mathrm{th}}\$ the thresold or pinch-off or ON gate voltage the voltage that should be applied to between the gate and the source of the JFET in order to bring to (almost) zero its drain current.

Not the answer you're looking for? Browse other questions tagged transistors electrical jfet or ask your own question.

5
Why do LDR photocells use CdS and CdSe?

4
Is pinch off voltage of JFET constant?
3
Depletion region in JFET transistor?
16
Why MOSFET Pinchoff occurs
0
In an n-channel JFET, why isn't the formation of depletion layer symmetrical?
0
Which one is the pinch-off voltage?
3
What is the difference in performance of a JFET current source to a 741 Op Amp current source?
1
Simple N-JFET circuit with PWM
1
Describing the process of pinching off of a n channel in JFET