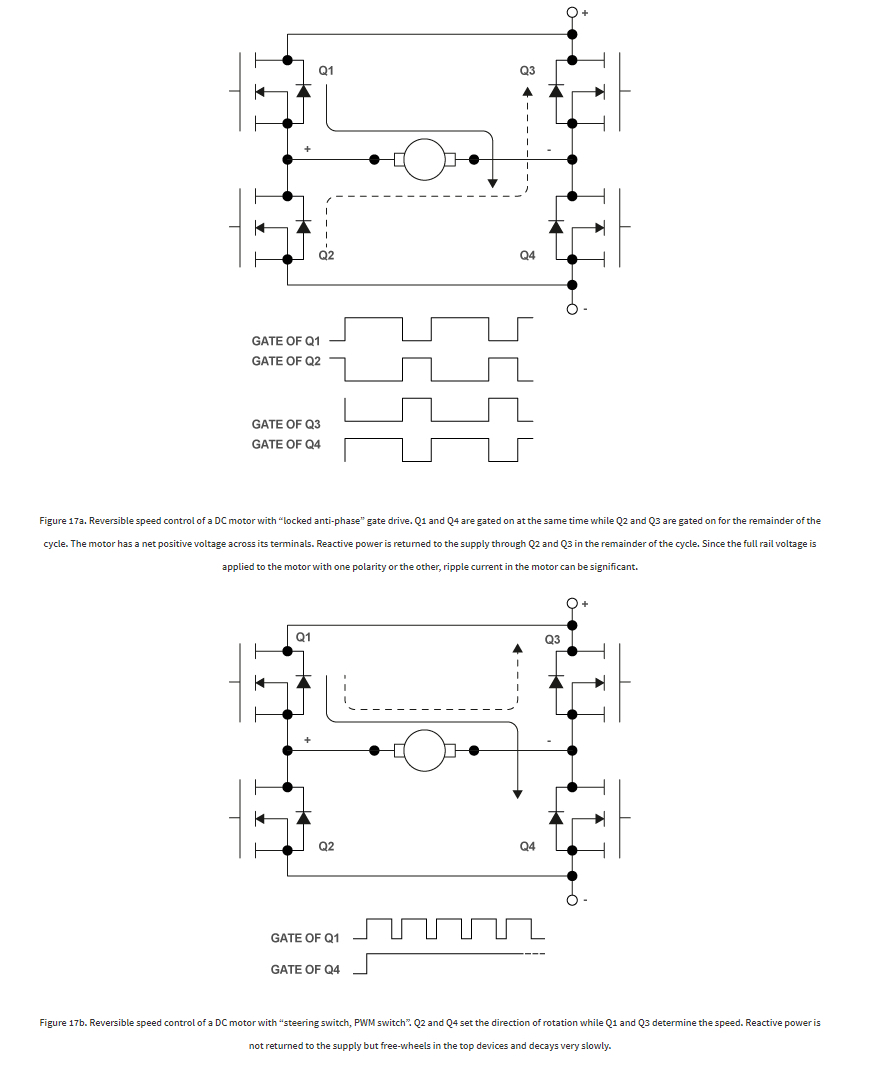 Hello. I want to inquire the method that describes when, one side is ON/OFF(fig.17.b), and the other goes with PWM. The point is, wheather both of mosfets (high & low side) will be on/off and some extra mosfet on the power supply ground will be added, that will respond for PWM at this time now, will it keep the advantage when the power do not flow back to psu?

I guess not, but such a point)

In Figure 17a the two transistors in each half-bridge are both driven in anti-phase with a PWM square wave. Q1 and Q4 are gated on at the same time while Q2 and Q3 are gated on for the remainder of the cycle. At 50% duty cycle the average voltage across the motor is zero. As the duty cycle increases in one direction or the other the motor sees an average voltage at its terminals that can be positive or negative, depending on the duty cycle. Two switches are always gated on and apply a defined voltage to the motor, as determined by the control board. Change in direction is as natural as a change in duty cycle. Current can flow in both direction and the motor can motor or regenerate. Notice that, during the first part of the cycle (transistor current), power is delivered to the motor. During the remainder of the cycle power is returned to the supply. The control method shown in Figure 17b uses the lower switches to determine the direction of the motor (Q4 in the example), while the upper switches are PWM-modulated to regulate the speed. This method is similar to the one represented in Figure 16. Notice that only two switches are gate-controlled on or off, while the other two have zero volts applied to the gate. In some instances the direction of the current establishes the voltage applied to the motor and it may be different from what is commanded by the control board. A change of direction requires a change-over from one transistor pair to the other, a common source of control headaches. The first method gives better servo performance while the second method gives much lower ripple current in the motor for the same operating frequency. With this modulation method power is not returned to the supply. Current free-wheels in the top devices and decays, as determined by the losses.

Normally with positive supplies, and Nch Enhancement FETS preferred, the low side FET gate voltage uses the single supply voltage with PWM. WHile the High side controls direction with a diode-cap charge pump (from PWM pulsed voltage) to create a boost voltage above Vdd for the high side Vgs.

The 1st method is only used for special low power motors that can handle the ripple current and power dissipation.

The 2nd method uses dynamic PWM braking to shunt the EMF current to slow down to stop then applies direction change to accelerate in reverse.

Deadtime in micro-seconds depends on the motor L/R time constants.

You can start learning with a half-bridge IC Theory of Operation in many places. e.g. here

Not the answer you're looking for? Browse other questions tagged h-bridge or ask your own question.

2
Why are always used N-Channel MOSFET on both High and Low side on BLDC applications?
2
Snubber diodes for a DC Motor with 2 relays