I have a peculiar confusion regarding the relationship between a closed-loop pole on a root locus plot and its gain and percent overshoot. I have found a point on the root locus plot that MATLAB claims to have a percentage overshoot of 5%:

However, when I plot the step response, the percent overshoot seems to be 22%: 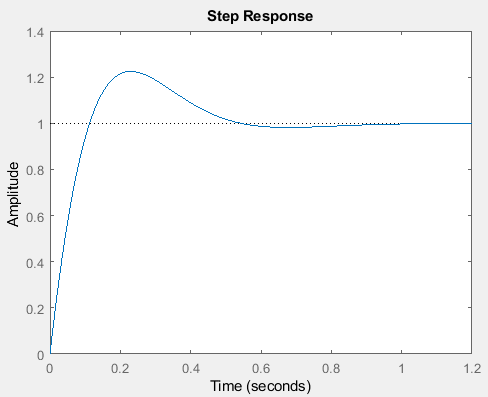 What is the reason for this discrepancy? Have I misunderstood the MATLAB code?

From the root locus, the dominant closed loop pole will be the real pole between \$\small s=-2\$ and \$\small s=-3\$, since it's approximately three times further from the origin than the 2nd order complex poles.

Note, a dipole is often created when attempting to cancel a troublesome, perhaps slow, pole by plonking a zero on top of it - in practice, there's always an error between the pole and zero values, hence a dipole is born. Essentially, that's what you've done here - by choosing the value of \$\small K=13.7\$, the first order pole is dominant. Choosing a smaller value for \$\small K\$ would have given dominance to the 2nd order roots, which would then make the system more oscillatory. But there's a limit to what can be done when there's only one control parameter (\$\small K\$) to play with.

The features of a dipole in the transient response are: a relatively large initial overshoot, and a long-tail (i.e. the settling time is longer than that promised by the initial response characteristic) . Both of these are apparent in your step response plot.

In the root locus plot, MATLAB computes the percentage overshoot according to the lines of constant damping ratio (ζ). The problem is that the damping ratio only makes sense for a second order system and the transfer function used (gproc) is not a second-order system since it has 2 zeros and 3 poles.

Not the answer you're looking for? Browse other questions tagged control-system gain matlab step-response root-locus or ask your own question.

2
PI Controller Design (Ziegler-Nichols) and Unit Step Response Graphing for 4th order system
3
Pole Zero Cancellation on a Root Locus
0
Discrepancy between MATLAB and Simulink closed loop response?
0
Given desired overshoot graphically find k from the root locus (Scilab)
0
How do I find value of gain that stablizes the system from root locus?
1
Trouble with meeting design specifications of a second order system using Matlab
0
Can I remove my step response overshoot?