Design an emitter-follower amplifier with bjt

I'm studying the emitter-follower configuration for bjt on the book "Practical Electronics for Inventors". On pag 439 there is an example related to the design of this system. In this problem it knows the parameters Rload, Vcc, hfe and f3db, and the target is to find the other parameters:

Than it says that R1//R2 <= 0.1 Rin(base),dc because this prevents the voltage divider's output from lowering under loading conditions. I don't understand this statement.

My first question is: why R1 and R2 are in parallel? If you apply the simplified model (I show after) to find the quiescent operating point R2//Rin not R1//R2. Am I wrong? Con you explain the meaning of this statement? 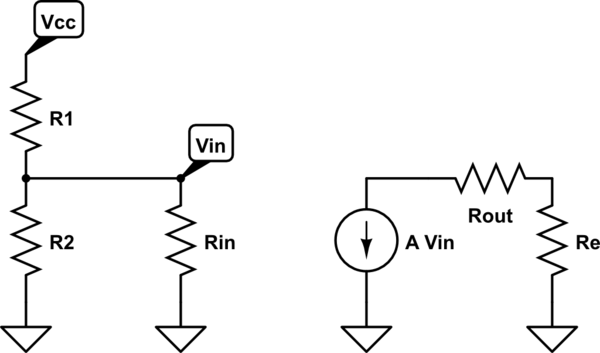 this prevents the voltage divider's output from lowering under loading conditions

R1 and R2 act as biasing resistors -- they're meant to generate a DC voltage that biases the transistor in a suitable operating point. The signal itself is injected via C1.

When you add C1 back in, it's going to source/sink a certain current from that equilibrium point, and therefore change the voltage on that node (by sourcing/sinking extra current from the other nodes; after all, Kirchhoff's current law must still hold.) If the current is significant in comparison to the equilibrium, then it's going to disturb the operation point and exacerbate the non-linearities of the BJT.

Therefore, making sure the bias resistors' current is significantly higher (10x in this case) than the input current is an attempt to bound the errors due to the BJT's non-linearities.

why R1 and R2 are in parallel?

Forgetting about the input voltage for a moment, transform the circuit composed of Vcc, R1 and R2 into its Thevenin equivalent model. What do you get?

If you apply the simplified model (I show after) to find the quiescent operating point R2//Rin not R1//R2. Am I wrong?

You are wrong. Nobody models BJT circuits this way. Google for (or look up in your book) "hybrid-pi model" or "T model".

Not the answer you're looking for? Browse other questions tagged analog bjt emitter-follower or ask your own question.