Ill try to make it as clear as possible. This may seem like a simple question, but it is something that I havent quite figured out. It has to do with polarity on the leads of an AC source. Every book I read, pictures an AC source with two leads such as this:

Here are the 3 scenarios and the thing that really confuses me:

Is only one lead changing voltage while the other stays stationary at 0V, meaning that the upper lead will go from + to - and from - to + and so on while the lower lead stays at 0v?

Comparing it to the AC wiring on any house, theres 1 cable which is "Hot" and the other which is the "neutral", I know the neutral doesnt carry any voltage and its the 0v reference, so the HOT cable is the one which changes its polarity.

Now, what exactly happens when I ground something? for example what is the difference of having that 0v floating or connected to ground, and what happens when I ground a circuit at something else rather than 0v? For instance say I have the following circuit: An ac source feeding a transformer, there are a couple of resistors across its secondaries and the mid point between the resistors is connected to ground. 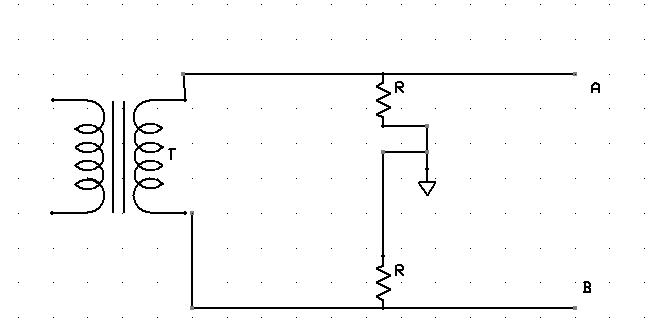 So let say that the transformer has a 1:1 ratio and both resistors have the same resistance, 100ohms for this example, that means they will form a voltage divider of half the total voltage.

I know all that because thats how they thaught it to me, what I dont know is this, if ground potential is 0V, and my transformer's (bottom lead) is at 0v, why will I get a voltage at point B with respect to ground?

I get very confused between the diference of 0v and ground reference, and when I see circuits like the previous one which are grounded at some place different from 0V, specially on AC circuits. On DC it makes sense, if I ground the negative side or 0V side, I will have a positive voltage, if I ground the positive, I will get a negative voltage. But on AC it confuses me the fact that I dont know if the only alternating current is on one side of the terminals or if the 2 terminals are switching between each other.

It seems like on some cases its only one side (like in a house electrical installation) and on others like in a balanced push pull circuit its both sides.

It seems I dont have a clue of how exactly AC works.

The key is to realize that there is no such thing as 0 volts in an absolute sense. Voltage is a measurement of difference in potential between two points. You can say that something is 0V with respect to something else, but you can't say that a conductor is at 0V without including a reference.

For a floating AC source like you've depicted (or a transformer), there's simply no concept of 0V until you define one. And you can define that any way you want: call the bottom terminal 0V, then you're in your first scenario. Or call whichever terminal has the lower potential at any instant 0V, and you're in your second scenario. Or define 0V as the "midpoint" when the top and bottom are at the same potential, and now you're in your third scenario.

When you use words like "stationary" you need to define what they're in reference to. Certainly the hot line does not stay "stationary" with respect to the neutral line, nor vice versa. In practice, it's common to use the earth ground as the reference point. In a house, it's common to physically connect neutral to the earth ground. Then, it's generally the case (modulo effects like resistance in wires) that the neutral will be at a potential of 0V relative to earth ground.

It sounds like you understand the concept of a floating DC supply, where there is no intrinsic reference to ground and you can choose to connect ground to either terminal. Extending this understanding to AC should be straightforward: consider that an AC supply is just like a DC supply where someone's constantly adjusting the knob, except that you can also bring the voltage negative (e.g. bring the black terminal to a higher potential than the red terminal).

The + sign does not denote polarity as in DC, it is simply a convention to denote phase. This way you know that if you have two of them in series, they will either add or subtract depending on how they are wired. Assuming sinusoidal sources:

So the + side merely means that that side will become positive at t=0, and half a period later it will become negative. In relative terms of course, since you can define voltage and time offsets, and different waveforms, but they are all adjustments to this reference.

Additionally, It has nothing to do with which side is constant while the other one goes positive or negative. In fact, it does not matter. You will not be able to come up with any circuit at all where this makes any difference, because all that matters is the difference in potential.

As to which conductor is carrying the electrons and which one has the holes, both conductors alternately carry electrons. If you look at an AC waveform, you'll see the wave crosses a zero point, after which the electrons start flowing the other direction. 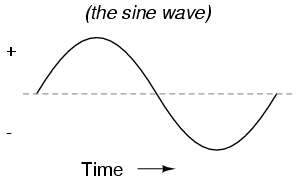 Not the answer you're looking for? Browse other questions tagged voltage theory or ask your own question.

0
Full wave doubler difference and connection of neutral and phase
28
“Ground” vs. “Earth” vs. common vs. negative terminal
1
Two deep-cycle batteries connected in parallel by a single terminal
12
Why to disconnect the negative/ground terminal, not positive?
1
DC Voltage Polarity and Current Flow?
1
Basic Theory - finding voltage between two points
0
Switching positive and negative voltage
1
On a 3-terminal bench power supply (+, -, GND), are there positive and negative drivers behind each of the terminals?
0
Does current flow between a positively charged conductor and a neutral conductor?