Protection and termination of an outdoor underground Ethernet cable

I have quite a quite long outdoor FTP Cat 5e Ethernet cable (just shorter than 90 meters) that will be used to connect 2 buildings, buried 1 meter underground. As I understand, for a proper operation and reliability it has to be properly terminated, since this is a shielded cable, and since it is laid outdoors where it may be exposed to overvoltages and voltage surges from lightning strikes. I have read a few similar questions, but none has quite specific answers, and have consulted electrical code book of my country, which suggests that underground cable runs don't need overvoltage protection, but it is referring to power lines, and does not take signal lines into consideration.

So, with that in mind I came up with a few schemes, and would like to know if my understanding and usage of them is correct: 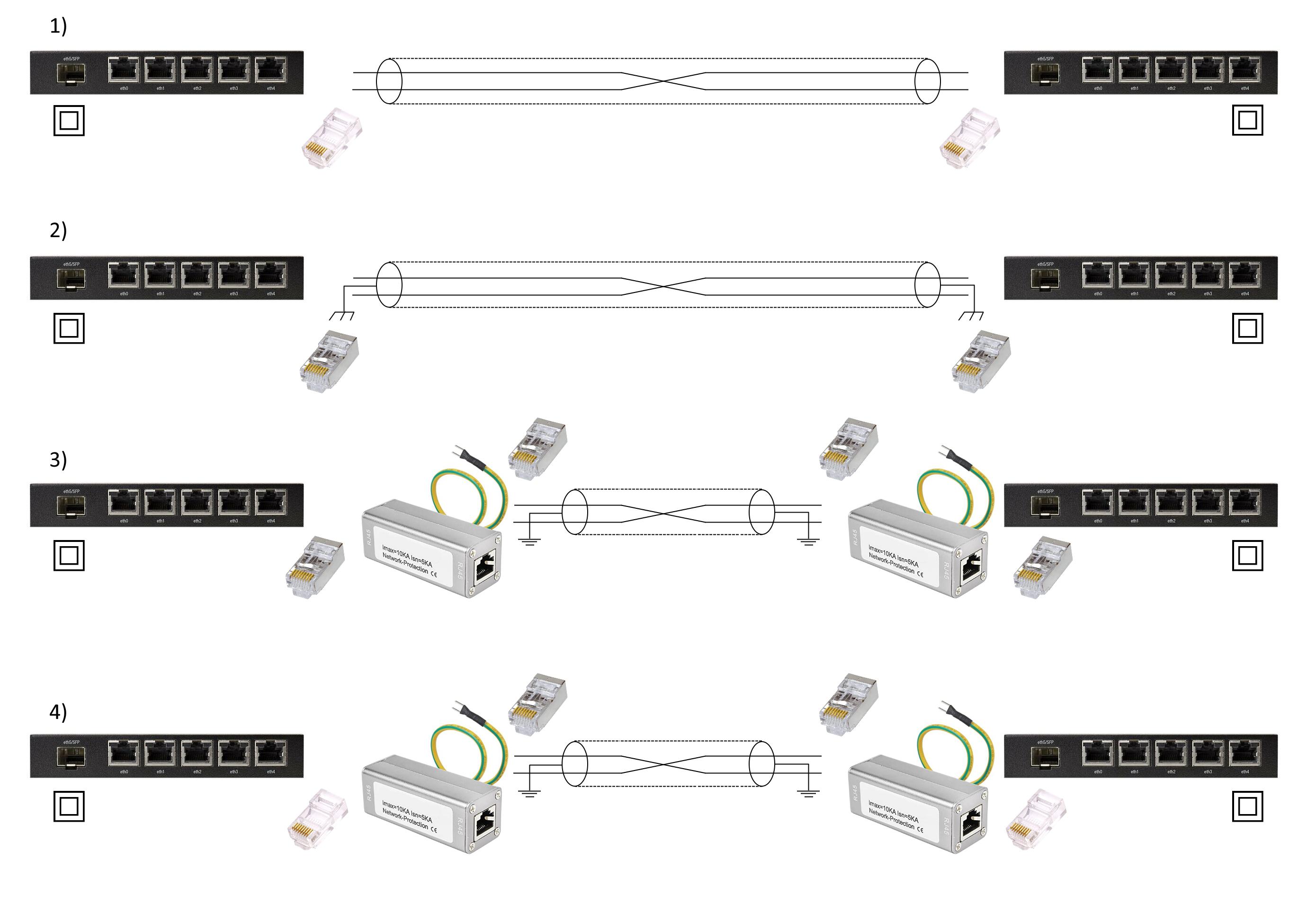 As I understand, 3 and 4 are the proper way to connect outdoor Ethernet cable to the equipment. Am I correct?

Other connections that are, as I understand, are even worse, is grounding both switches (will result in ground loop), or terminating shielded cable with shielded connector only on one side (will make EMI and overvoltage worse).

It is wise to shield ethernet in outdoor applications, a lightning strike can generate 1000's of V/m.

As for the shield, it could be terminated on one or both ends, the shield should not extend to indoor equipment from the lightning suppressors. The suppressors shouldn't be conductive from shield to shield (and from the pic it looks like it could be via the chassis.)

I would say 4 is the best option.

Instead of running cat 5 you could also avoid all problems by running fiber. I know of multi building installations on hills that run fiber, because fiber is not conductive or susceptible to EMI (or lightning).

Other connections that are, as I understand, are even worse, is grounding both switches (will result in ground loop), or terminating shielded cable with shielded connector only on one side (will make EMI and overvoltage worse).

Grounding doesn't really matter with the ethernet data or power lines (8 conductors inside) because of the isolation, and shielding doesn't matter in most cases (except I would use a shield if the cable could be affect by EMI or lightning).

The shield should not extend to a device because this could be a conduit for very large currents in the event a lightning strike induced a large current on the shield.

Not the answer you're looking for? Browse other questions tagged ethernet grounding emc groundloops or ask your own question.