I start working with HART devices and I really try to understand how digital data is transferred trough 4-20ma current loop. I start read this article: https://instrumentationtools.com/hart-communication-tutorial-part-1/ and one paragraph said this: "The HART protocol makes use of the FSK technique to superpose the digital communication on top of 4–20 mA signals. The digital FSK signal is phase continuous and has a 0.5 mA amplitude having two different frequencies, 1200 Hz and 2200 Hz, representing binary 1 and 0, respectively. Since the average DC value of a sine wave over a time period is zero, the FSK signal does not add any DC component on the 4–20 mA analog signal."

I understand that the digital data is superpose on top of 4-20mA, but what I don't understand is if that analog signal "vibrate" to different frequency to produce digital communication data, or is another signal (the "digital" one) beside that, and if it is, how can they don't interact? 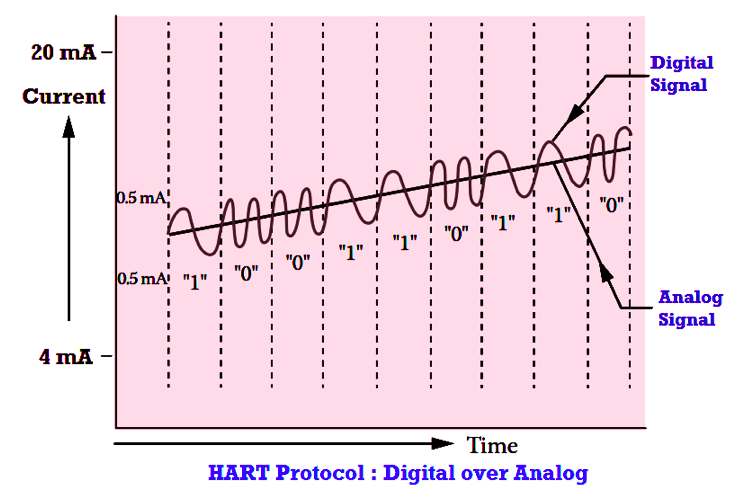 Also, in this article: https://instrumentationforum.com/t/highway-addressable-remote-transducer-hart-tutorial/4526 I found this: "As indicated by Figure 12.8, HART provides two simultaneous communication channels: the 4 20 mA analog signals and a digital signal." What are those channels? different voltage? different current? different frequency? And how can they interfere?

I understand that the digital data is superposed on top of 4 - 20 mA, but what I don't understand is if that analog signal "vibrate" to different frequency to produce digital communication data, or is another signal (the "digital" one) beside that, and if it is, how can they don't interact?

The trick here is the HART protocol can transmit the analog value as a 4 - 20 mA current just like a regular 4 - 20 mA transmitter. Meanwhile we can superimpose a frequency modulated signal on top of that. This is very similar to the old-fashioned telephone modem (MOdulator-DEModulator) where the digital data was transmitted using audio tones with one frequency for a '1' and another for a '0'. So the answer is that digital data is transmitted as an analogue signal.

The points to note are that the AC is designed to always use full cycles which have an average voltage (or current) of zero so that the average analog value is not affected.

At the receiving end the high frequency signal is extracted through a high-pass filter and demodulated to retrieve the digital data. Meanwhile the analogue value is passed through a low-pass filter to remove the modulation and is read as normal with an ADC.

"As indicated by Figure 12.8, HART provides two simultaneous communication channels: the 4 - 20 mA analog signals and a digital signal." What are those channels?

Just as described above.

And how can they interfere?

They interfere constructively so that the modulated data signal is added to the analog 4 - 20 mA signal as shown in the diagram.

Remember that 4 - 20 mA circuits are usually used for process values which change slowly relative to the HART frequencies so the low-pass filter for the analogue value can easily filter out the HART modulation.

... according to this, what is the frequency of the analog signal? Is it 0 because is DC?

It depends on your definition of DC. Yes it's DC because the 4 - 20 mA current is always flowing the same way. It is also, however, varying with time and this is where we could disagree. Let's say we're monitoring pressure in a hydraulic press and it varies from 0 bar (4 mA) to 50 bar (say, 12 mA) and the press has a 10 s cycle time. That means we'd have a 0.1 Hz analog signal. I could say that this is an average 8 mA signal with a 0.1 Hz, 8 mA peak-to-peak AC signal superimposed on it. I think most of us would just consider it as a time-varying DC signal and say that it's DC varying between 4 and 12 mA.

As far as the filtering is concerned our 0.1 Hz signal above would be very easy to allow through a low-pass filter designed to stop the 1200 Hz HART signal. A simple RC filter would probably do the job. Typically you won't have to worry about it as the HART modules will do it for you.

Not the answer you're looking for? Browse other questions tagged analog signal protocol 4-20ma digital-modulation or ask your own question.

5
Common Analog Signal Frequencies
1
Confusion with modulation/demodulation
2
Signal rate, data rate and bandwidth in digital signals
0
Is a multiplexed signal same as a composite signal?
4
What makes a circuit digital?
13
General question about analog and digital signals
5
Routing Digital Signals to an Analog Circuit
2
Advantages of filtering signals using analog or digital methods?
0
Raspberry Pi hat design
13
Is it possible to send multiple data bits on a single wire at once?