Is there an easier alternative for finding the gain of this operational amplifier?

Is there an easier method than what I've tried, that I can use in order to find the parametric gain in the following circuit? If so, what is it? 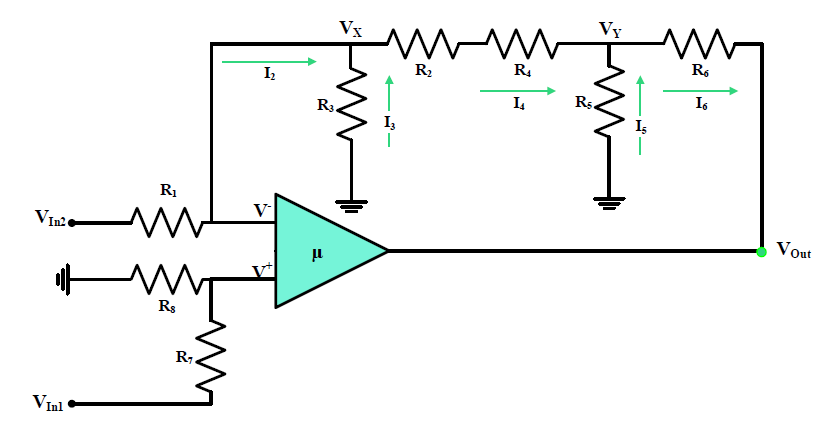 The method I've used (my own efforts):

Firstly, I found the relation between Vy, Vout and V-, using several currents: 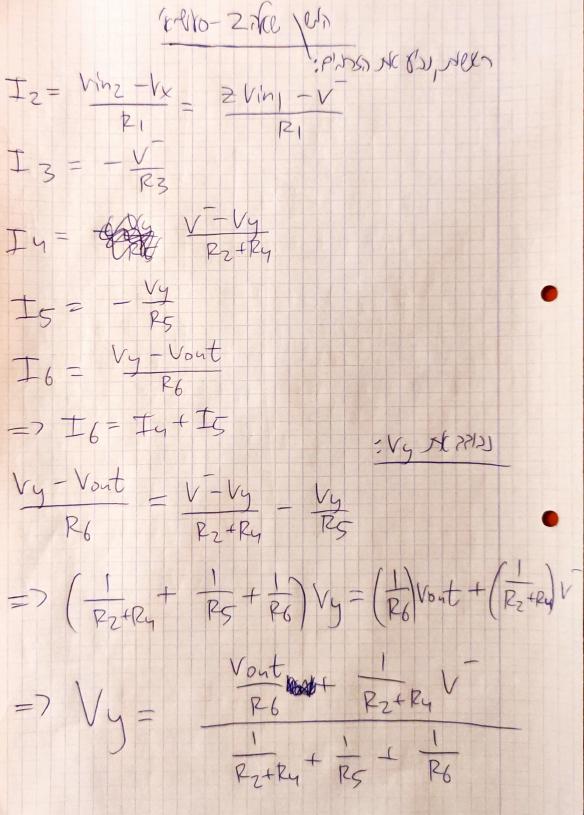 After that, I found the relation between V-, Vin1 and Vy, then plugged in Vy from the previous step: 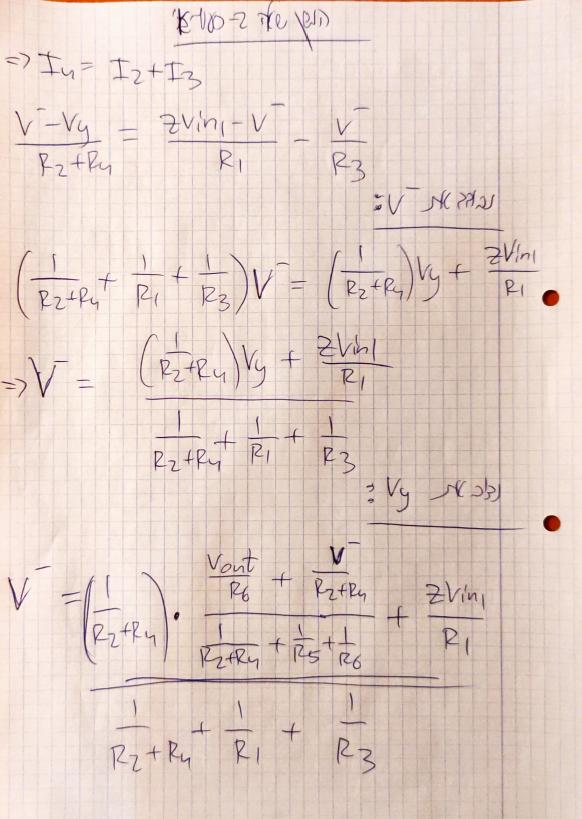 And then, a whole lot of Algebra for simplification purposes: 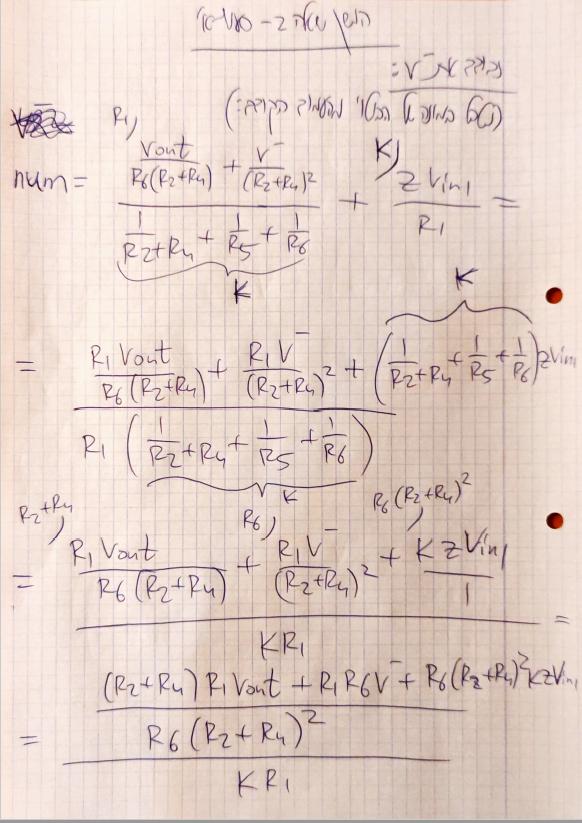 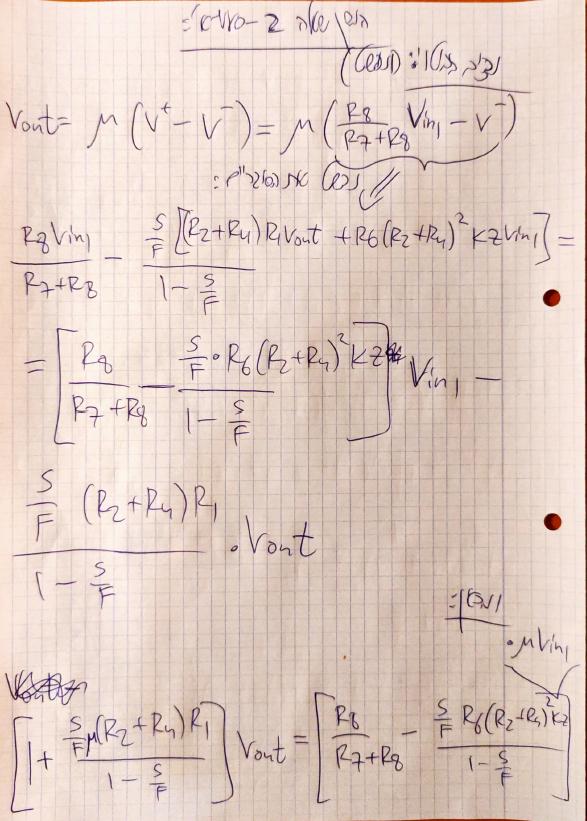 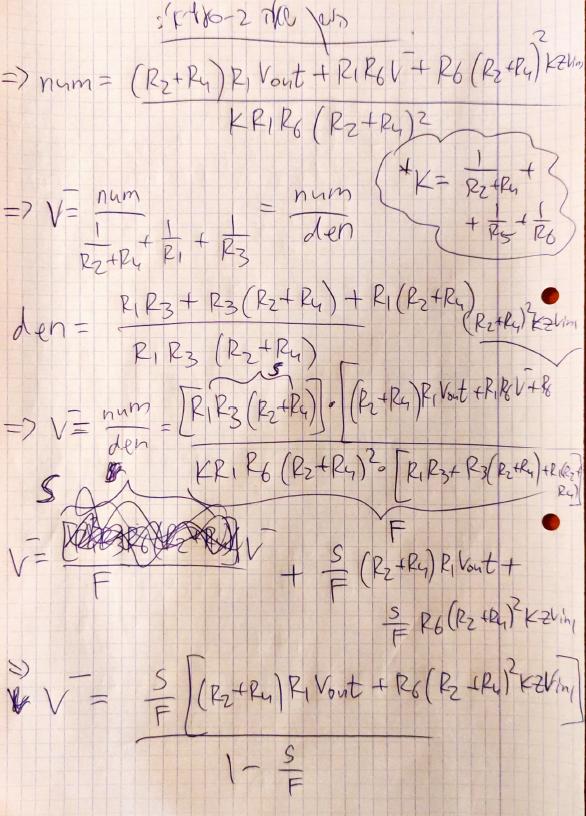 Finally, I arrived at this answer: 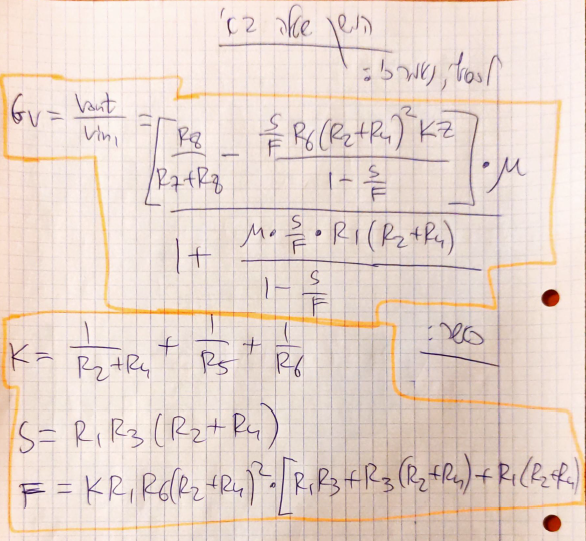 As you can see, the method I used was very complicated, and it also took a long time to think of and actually carry out.

Is there a method I could have used that would have made calculations simpler, easier or even more intuitive? If so, what is it?

The possible option I see for this circuit is to use the extra-element theorem or EET forged by Dr. Middlebrook some decades ago. You first identify an element that complicates the analysis. Here, it would be the series connection of \$R_3\$ and \$R_4\$. You have the choice to either bring it to infinity (temporarily remove the resistors from the circuit) or short it (replace the resistors by a wire). I have chosen to bring the element to infinity as it makes the circuit simpler to solve. This result would be the reference voltage I need to determine with the help of the below sketch: 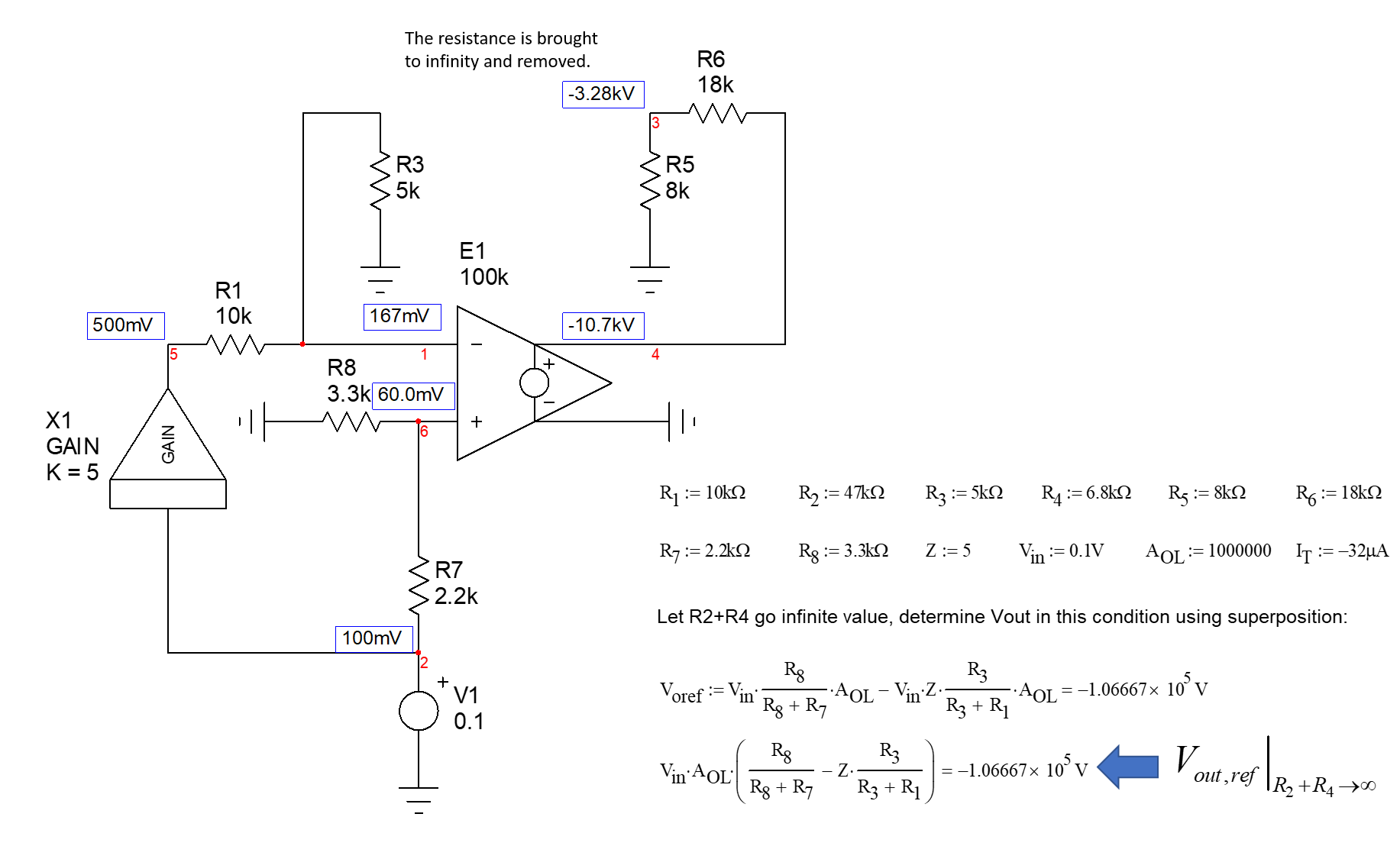 Here, I applied superposition to determine the output voltage at node 4. I can use SPICE with a bias point calculation to check if my result is correct with the arbitrarily-assigned values to the resistances and input source. The open-loop gain of the op-amp is purposely made finite as in your circuit and will disappear later on.

With the value on hand, I can now carry on and determine the resistance "seen" from the connecting terminals of \$R_3\$ and \$R_4\$ when the input source is zeroed. I have built another sketch and will simulate it to make sure my calculations are correct: 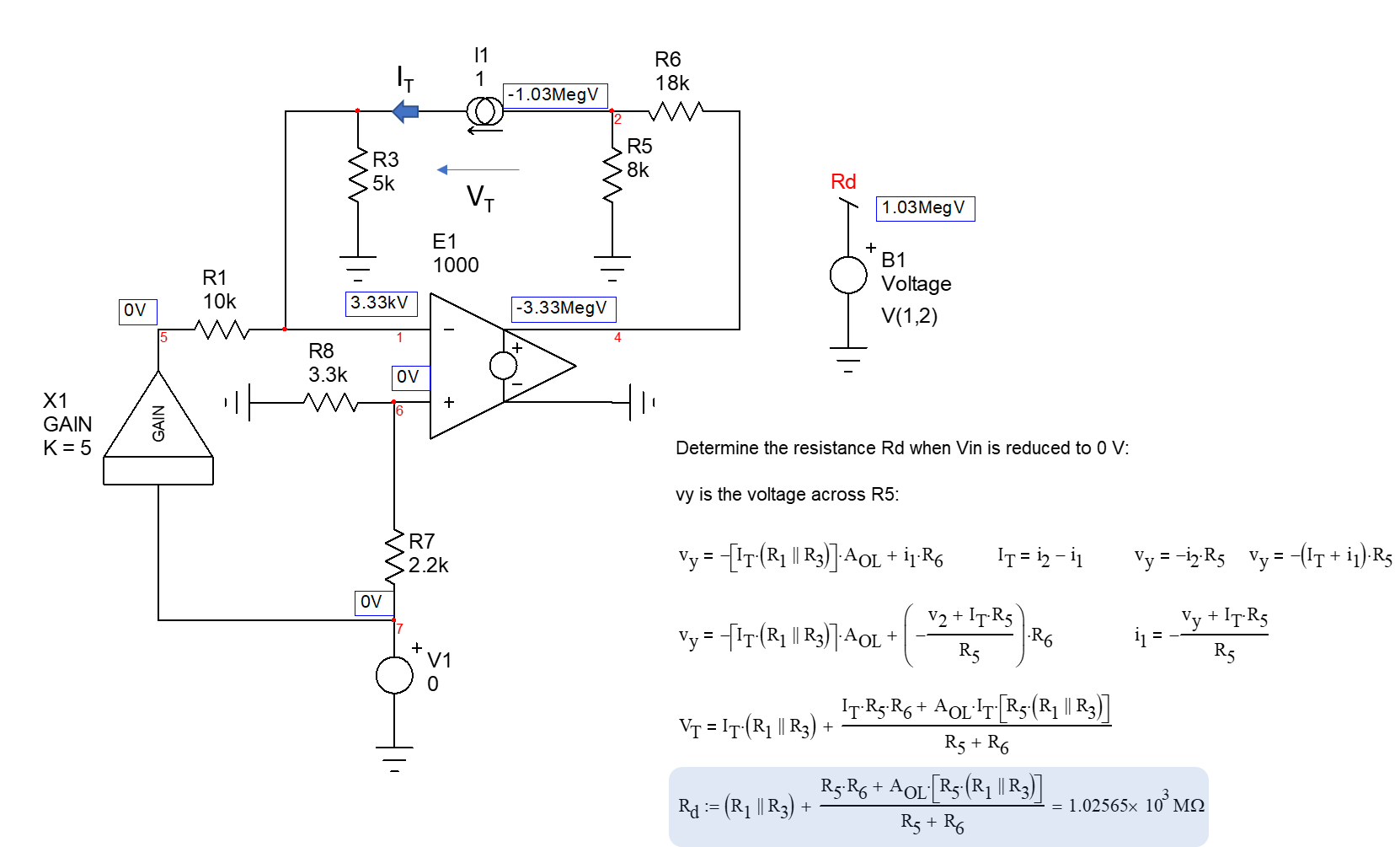 You need a few lines of algebra but nothing complicated to determine this resistance. Again, the cool thing is that you immediately check if the result matches the simulation. This is the case.

Finally, you determine the resistance "seen" from the connecting terminals of \$R_3\$ and \$R_4\$ when the output you want is nulled. A null means the output is 0 V but current can go through it, a bit like the virtual ground of an op-amp. The new circuit is shown below: 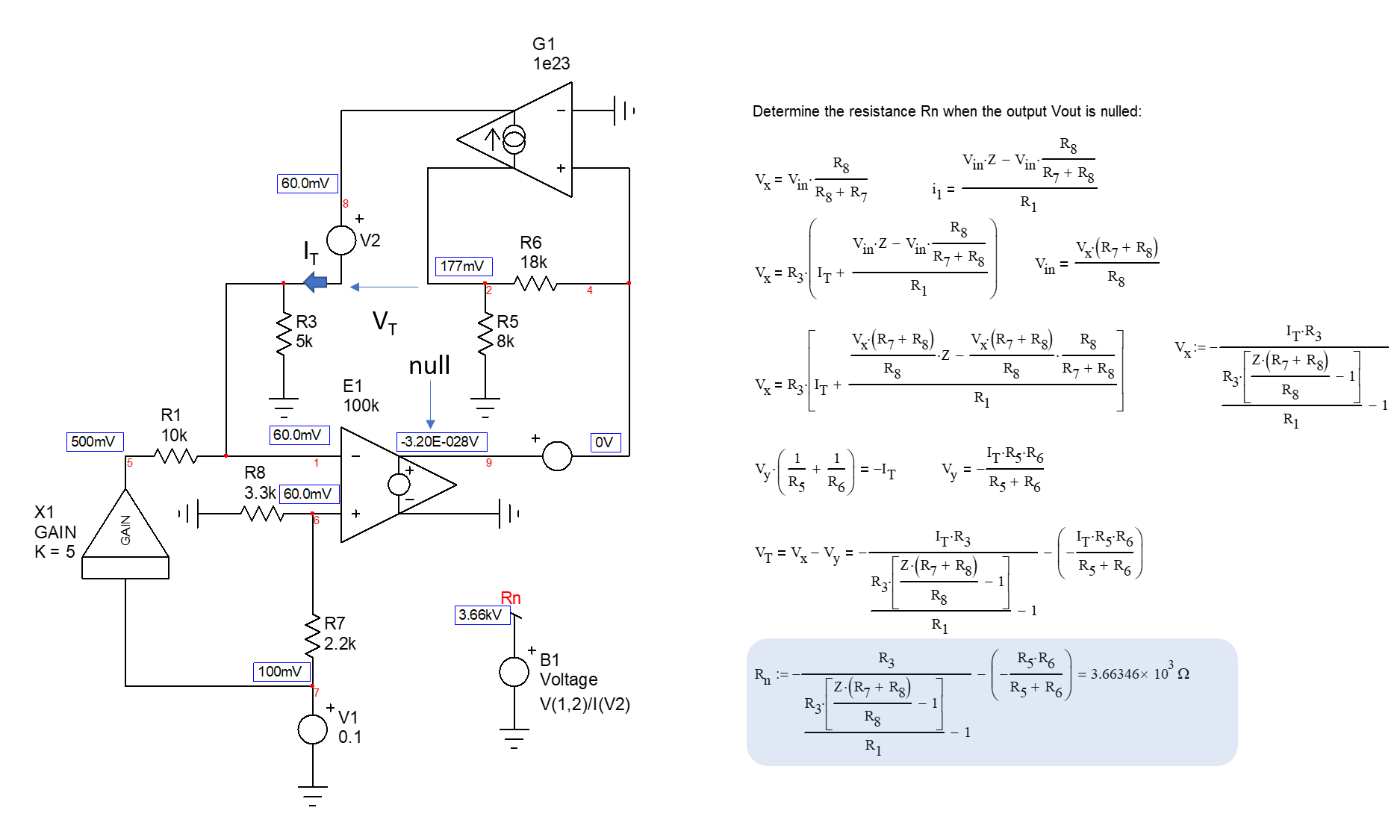 The circuit uses an extra source \$G_1\$ to force the test current \$I_T\$ in the circuit to null the output. It is described in the book I wrote on the fast analytical circuits techniques (FACTs) which also introduces the EET. This is is my modest contribution to the analysis which lets you simulate the resistance driving the element while provoking an output null. As you can see, calculated and simulated values perfectly match.

Now that we have all elements in hands, we can assemble the pieces according to the EET: 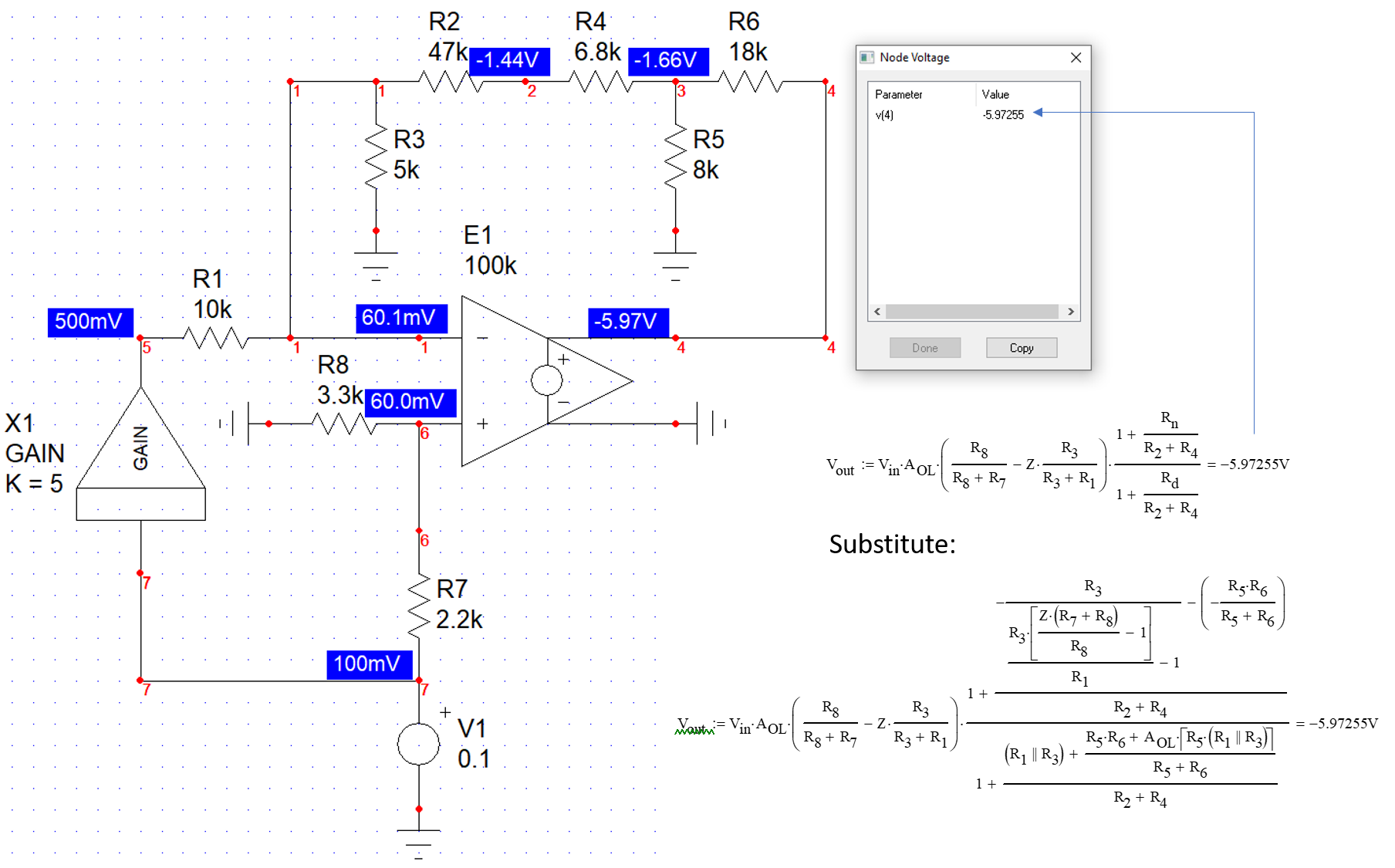 You can also factor the finite open-loop gain of the op-amp and obtain a simplified expression - still ugly :-) expressing the output voltage with an arbitrary input bias of 100 mV:

As you can see, the EET lets you split your complicated circuit into smaller sketches that you can individually solve and, more importantly, simulate to verify them. This is what I do all the times and it saved me in many occasion. This is the divide-and-conquer strategy promoted with the FACTs. You can acquire the skill with simpler passive circuits first and then complicate the analysis petit à petit (step by step).

By the way, I have tried your formula but there seems to be an homogeneity problem detected by Mathcad, unless I made a mistake while capturing it (let me know otherwise): 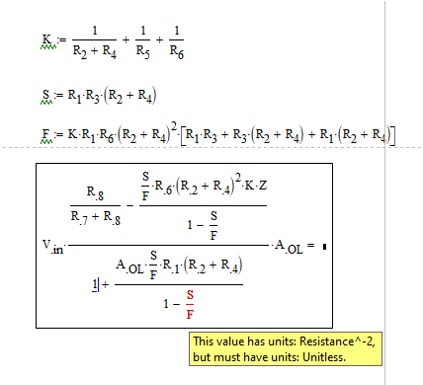 Reading a recommendation from Chu in which he suggests to use Thévenin to simplify the analysis, I have compared this approach versus that of the EET and it is a little bit simpler I reckon. First, determine the Thévenin resistance driving the (-) input from the op-amp output: 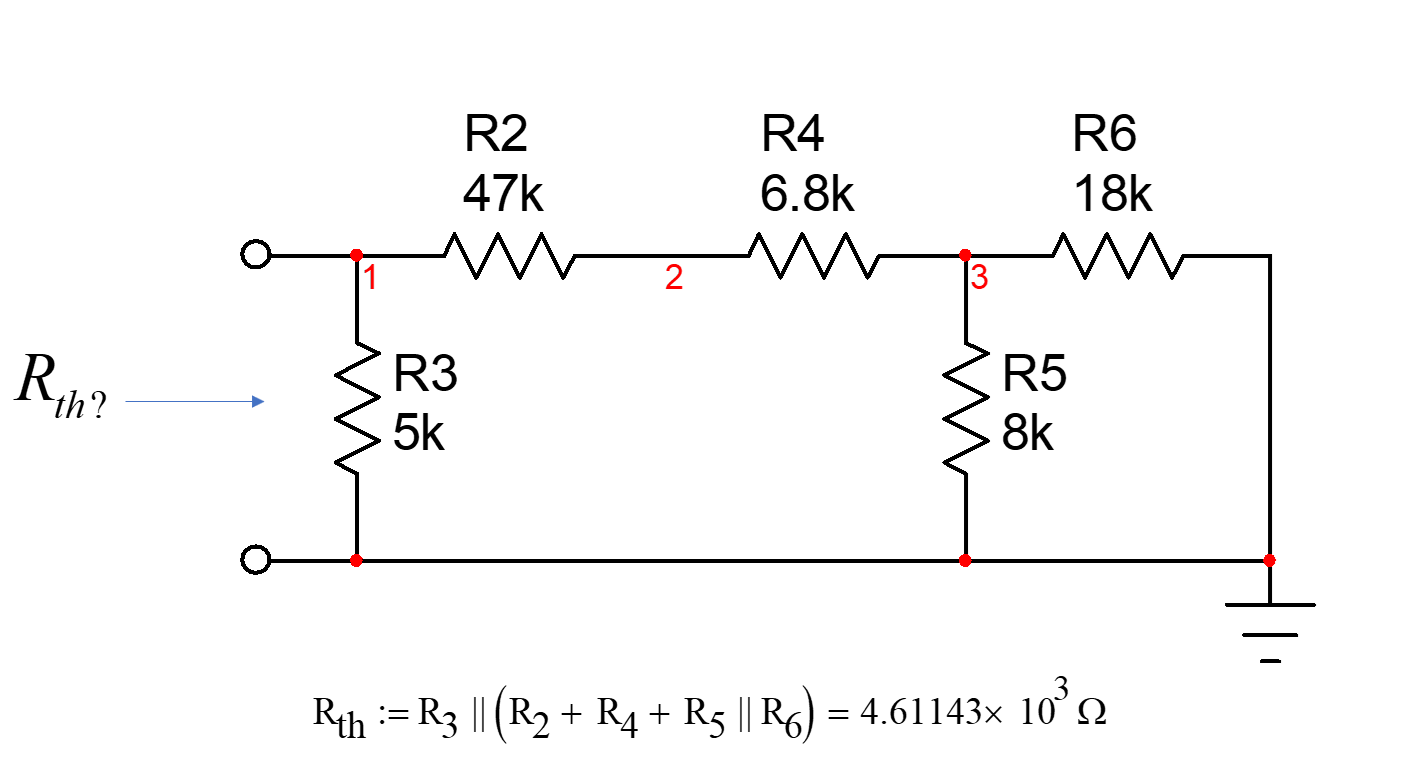 Then calculate the Thévenin voltage delivered across \$R_3\$: 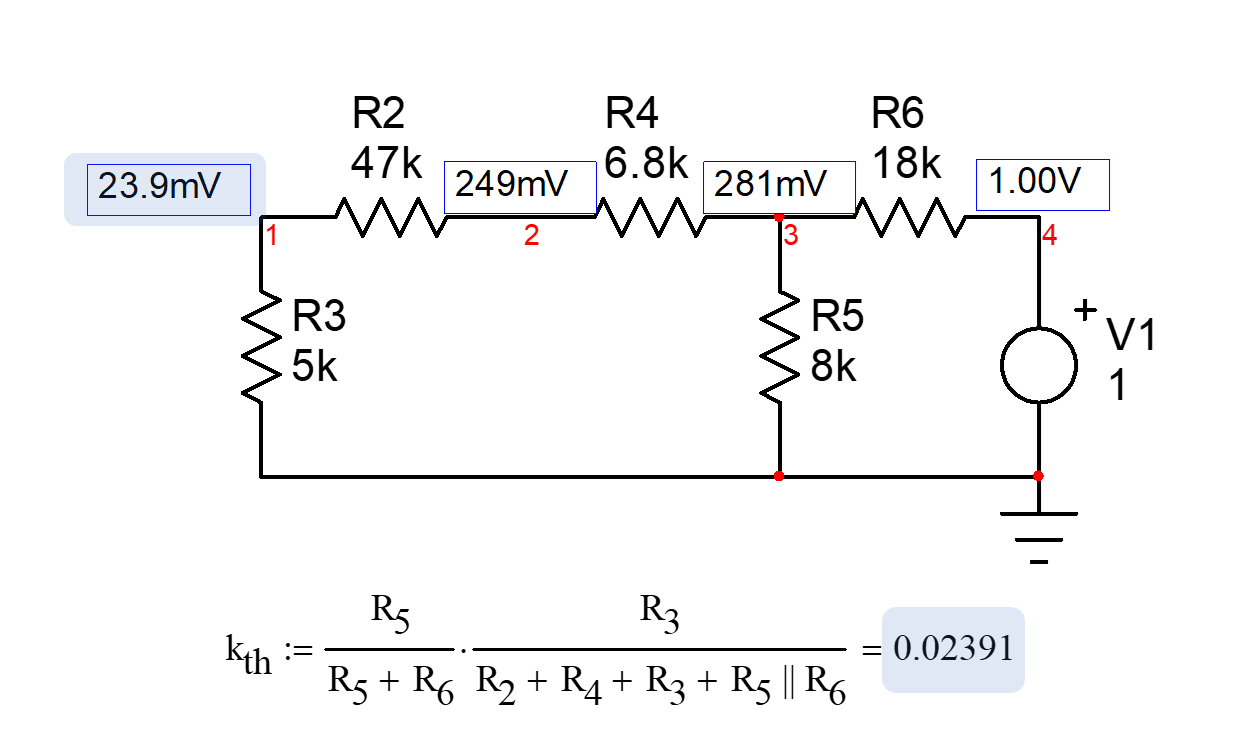 Now redraw the schematic with the Thévenin generator in place and check the bias points are identical with the full-blown circuit: 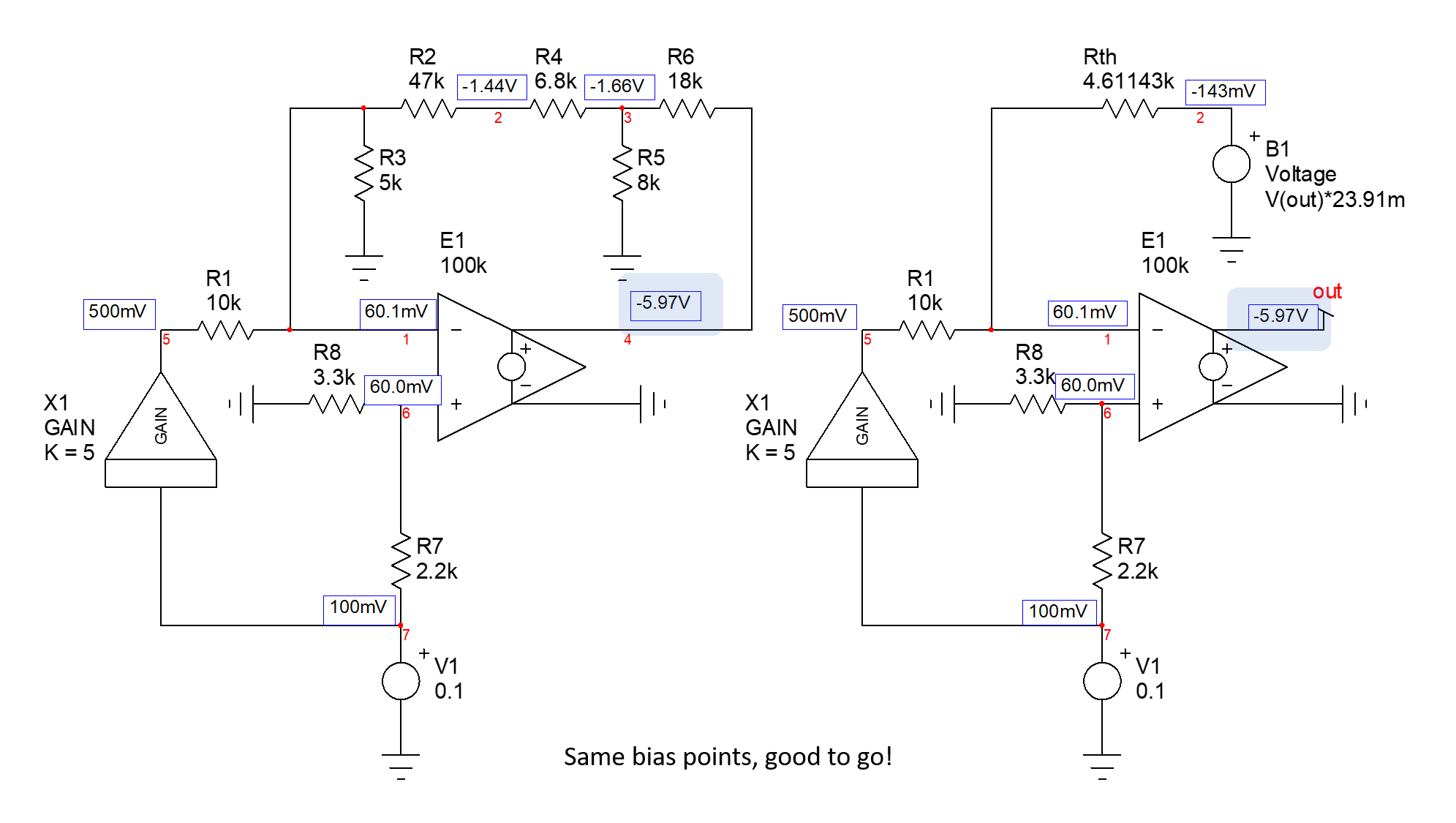 We can determine the output voltage by using superposition and keeping the Thévenin generator alive during this exercise: 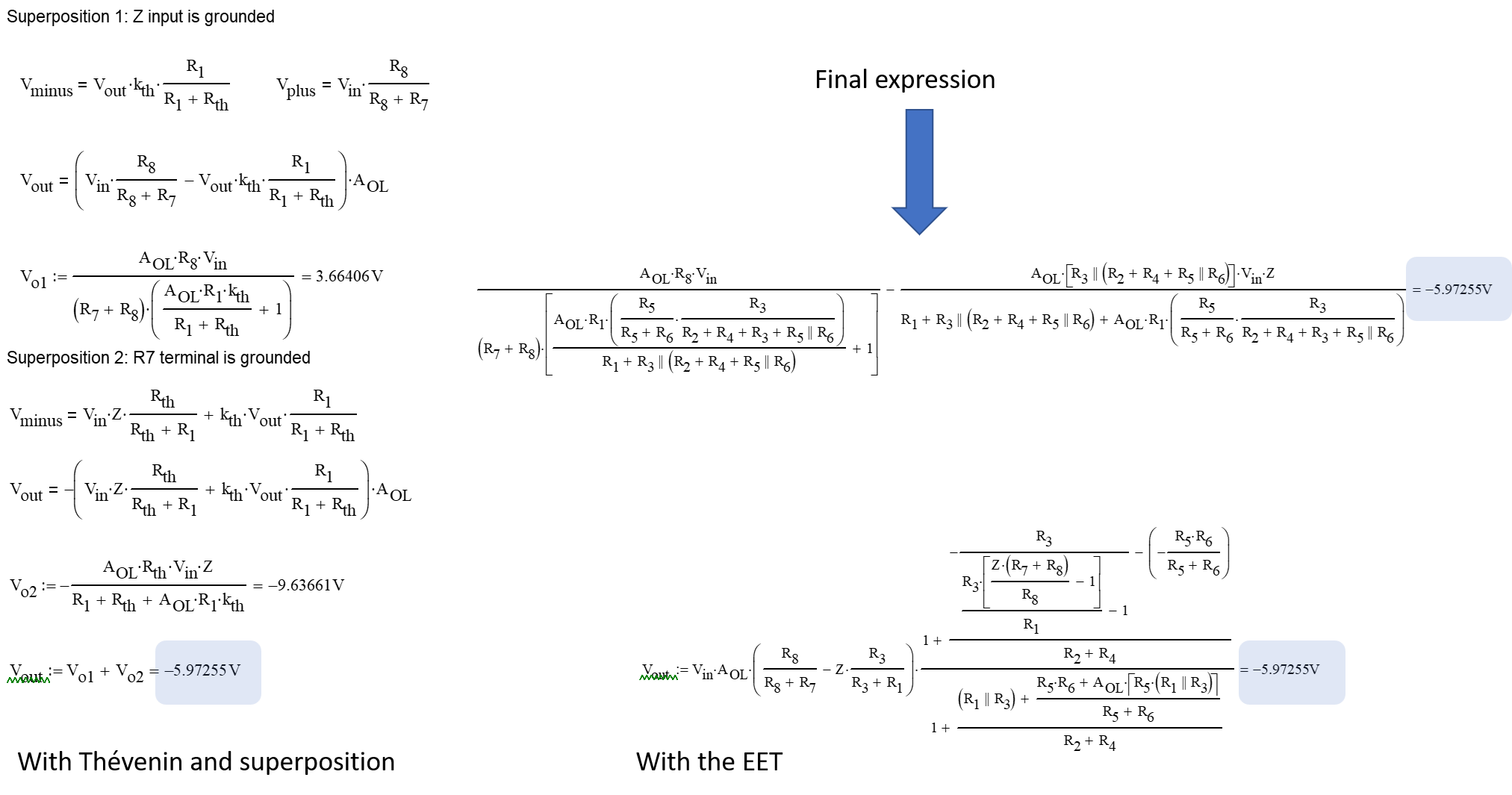 The results are rigorously identical between the two approaches. The EET perhaps offers a slightly more compact expression but requires to master the approach. Thévenin is simpler despite the intermediate states but leads to a slightly more entropic formula. That will do well for a Christmas exercise!

Replace the feedback circuit from \$V_{out}\$ to \$V^-\$ with its Thevenin equivalent.

You could also replace the series combination of \$R_2\$ and \$R_4\$ with a single resistor, to simplify the algebra a little.

Not the answer you're looking for? Browse other questions tagged operational-amplifier amplifier gain or ask your own question.

0
How to find the gain of Motorola operational amplifier?
2
Analysis of an Op-amp circuit
0
Finding Loop Gain (Aβ) of Transimpedance Amplifier
0
Gain of an Operational Amplifier
2
Series-Shunt Feedback Amplifier Analysis - Finding Loop Gain
1
How can we find the voltage gain of a BJT circuit if the Vin and Vout are on different transistors?
0
Finding the gain expression for this CMOS operational transconductance amplifier