Never thought about it until previous part I used, 3.5 mm stereo jack, gold plated, has depleted in the place I was buying it from.

Research for replacement shows that such connectors may have gold or silver plating. 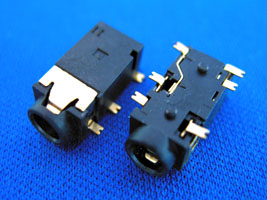 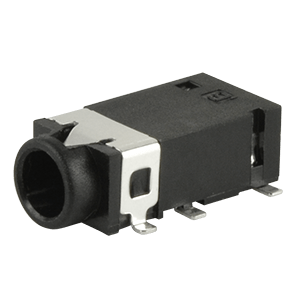 Ok for gold - it does not oxidize under normal circumstances, and expected to last long.

But why silver? Here's a past question on the subject; however audio does not have high currents, and several milliohms of added resistance would not make much difference for non-Hi-Fi parts. The jack is not expected to carry RF signal.

Datasheets for gold and silver plated parts state same life cycle - 5000 insertions. Prices of the parts are comparable, I would expect parts with gold plated contacts to have higher price.

So what is the difference between gold (example) and silver (example) plating in this implementation - for 3.5 mm phone jack?

I read the dozen articles on the applied differences, and can not figure out a reason why silver plating exists for this application. Moreover, the plug can be dirty or wet, and it will even more deteriorate silver plating. Then, oxidized silver is hard to solder.

@BrianDrummond if actual plating is nickel, then the only explanation is that by writing "silver" in datasheet manufacturer means color. Well, then where is guarantee that gold plating would be a gold, and not "flavor or gold"?

@SpehroPefhany: audio application has nothing to do with high power. Special medical application sounds strange. Maybe the air nearby the connector becomes saint, or vampires will be afraid coming to the room?

@MarkoBuršič: I have seen this article, it is enough to look at the conclusion:

Conclusions: Having outlined the qualities and implications of using silver as a contact finish, there are many signal connector applications where it may be a very good finish choice alternative – but only if the design characteristics and application requirements are appropriate. Appropriateness should be determined by design and application analysis as well as product testing and by addressing customer needs and perceptions where needed.

to understand that it is about nothing and does not contain answer to audio connector question.

Edit: I am wrong about this article. We can make several conclusions out of it:

@evildemonic did you see chips with silver plated pins? That would be very handy is chips terminals be soldered better if coated with silver plating. Re: RF - audio has nothing to do with RF; the only application I may think of is when headphones' cable serves as antenna for mobile.

@dandavis better conductivity does not convince me that silver is better for 3.5 mm audio jack. Gold still rules?

Update: after some more research I tend to believe that contacts themselves, the pieces of metal touching the plug, may not be coated with anything at all. These contacts may be bare nickel (as declared in datasheet), or "copper alloy" (which one?) or phosphor bronze, which all are seem resistive to corrosion and provide good contact. And all this gold and silver stuff is about "solderability" and units looking deluxe gems.

I am waiting for feedback from CUI devices and Tensility.

In addition to the research on the plating, I found out that connectors with the same part number, even made by same manufacturer, may have different datasheets, with differing dimensions, differing material of contacts, differing plating... wtf... see below - the connector I used before. No dates on the sheets to identify which one is latest. 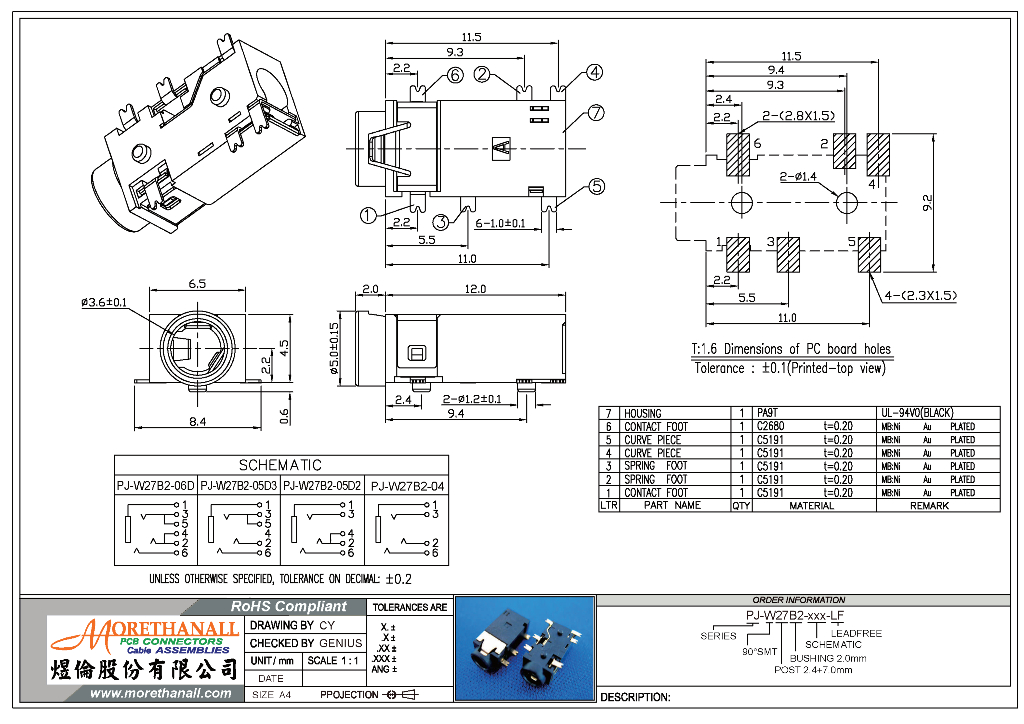 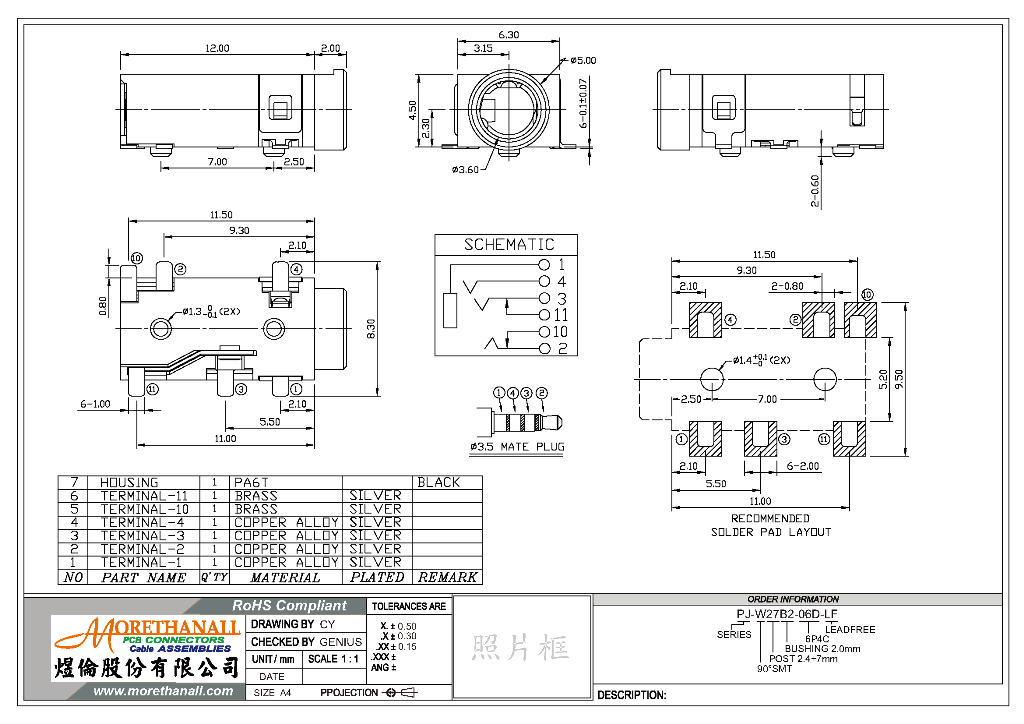 Good news from Tensility: the connector I have chosen, 54-00177, has its metallic parts - inner and outer contacts - fully gold plated.

I suspect the answer has to do with the 5,000 cycle rating typical on those parts. Gold is soft and there is a lot of wiping action in the 3.5mm connector design.

So you might find (too thin) gold flash in cheap jacks that will not retain the gold plating for many operations or thicker silver. Or thick and/or selective gold or gold alloy on better connectors.

Pro-audio connectors such as XLR are offered in both silver and gold versions, with a typical part such as the AAA3FBAUZ from Switchcraft coming in at about 50% more expensive in a gold version with the same rating.

There seems to be a plethora of bovine excrement in "audiophile" forums. I suggest going to a manufacturer who offers both and actually does engineering (not just sticking their name on imported products) to get technical recommendations.

If you look closely at the datasheets, you'll find that the silver or gold plating applies to the pins, not the internal contacts.

From your silver plated jack: 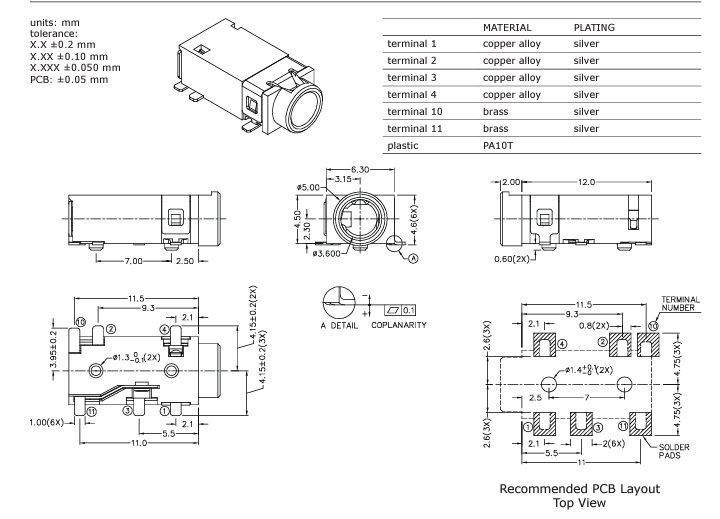 The table in the upper right corner has pin numbers.

The gold plated jack has a similar table and drawing.

It's not the contacts that are plated, just the pins you solder to.

Some of the pins are copper, others are brass. From what I've read, soldering directly to brass causes problems - the zinc in the brass dissolves during soldering, gets in the joint, and causes bad joints.

The brass pins must be plated to prevent the zinc from getting into the joint.

Silver apparently works fine by itself - plate a layer of silver and you are done.

Gold requires an "undercoat" of nickel - you have to do two plating steps with gold.

Silver is easier to manufacture, gold is better if your parts will be laying around unpackaged for a while - silver tarnishes, gold doesn't.

The silver parts even specify how long you are allowed to leave them unpackaged before reflow soldering. I expect part of the reason for that is the tarnishing.

The information above comes from this paper on diffusion barriers.

It appears that silver rapidly dissolves in solder with lead rather rapidly at normal soldering temperatures - to the point that SMD capacitors made with silver end caps are plated with nickel to keep the end caps from dissolving away entirely while soldering.

That implies that silver doesn't matter much to the conductivity in the final joint. You don't have a layer of silver between the copper pad and the copper alloy pin. There's pretty much just copper, lead solder, and copper alloy together and the silver is distributed through the solder.

The paper also describes the use of gold plating over brass. Both of the connectors have at least one brass pin.

The zinc in brass can apparently diffuse through the gold plating, and some of the copper follows. The oxidized zinc and copper don't solder well.

A layer of nickel under the gold keeps the zinc from diffusing. Zinc and copper stay where they belong. The solder joint is then between the copper pads on the board and the nickel layer - gold dissolves in solder like silver does, though not as fast.

Gold doesn't tarnish, so you don't have to worry about solderability as much.

Silver tarnishes, so you (in a factory setting) would have to pay more attention to storage than with gold.

In actual use, the silver goes away and you have a joint between copper and copper with solder in the joint. Gold goes away, but leaves a layer of nickel between the copper surfaces.

I don't think any of that matters if you are hand soldering small numbers.

The choice between silver or gold might matter if you are making boards by the thousands.

Why one manufacturer uses gold and the other silver may come down to having the facilities - or maybe those companies make products with both options.

In any case, it isn't about the conductivity if gold or silver or about tarnish that occurs after manufacturing.

It's all about chemical reactions before and during soldering.

I do believe the ansewr is non-technical. Gold is in fact more expensive. Let me explain.

As per advancedplatingtech.com the minimum thickness of a gold plate would be 0.1µm. Let us assume 50mm² of metal to be plated that gives us the amount of gold needed for one audio jack: 5e-12m³ = 5e-6cm³. 1kg of gold is 67cm² and cost 60e3US$. That means the gold on the jack is nearly 0.5 cent (somebody check this please)! And if you use a more propper thickness the cost might even go up to 1 cent and more.

In mass produced ultra-cheap electronics this is a lot of money.

For us buying single parts that does not make a difference.