I'm well out of my depth here – please be kind!

My kids and I have set up the circuit below and the LED is lighting up unexpectedly.

How would you explain to kids (around 10 years old) what is happening in the circuit?

So, I very much appreciated all the answers provided here, and the kids were receptive to the explanation I gave them. I showed them the circuit diagrams and we could visualise what was going on.

Then, in the course of more experimentation, we discovered something that seemed to contradict part of the story I had just given them: the part about the LED not illuminating when the switch is on. All the answers describe an alternate route for the electrons in that situation.

We removed the switch from the circuit, so now logically there's just one path for the electrons to travel; that is, like JRE's first diagram. And same as before, the LED draws enough current to be lit, the motor does not and so does not run.

The baffling part: when we hand-cranked the motor (in the same direction it would normally run) the LED dims, or goes off completely, in accordance with how fast the motor is cranked. So even though there is no other path for the electrons to travel, with the motor (artificially) “running” we saw less power going through the LED, just as if there was still an alternate route.

Stop cranking, and the LED lights up again. Crank in the reverse direction, the LED glows brighter than otherwise.

So I don't have a good explanation of why the LED goes dark when the motor is on.

Below is a close-up of the LED, both in and out of its housing. (There's a resistor in there, which no doubt affects things!)

The blue line shows how the current flows when the switch is open and the motor is off: 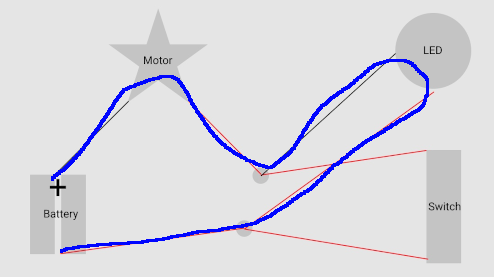 This is how the current flows when the switch is closed and the motor is on: 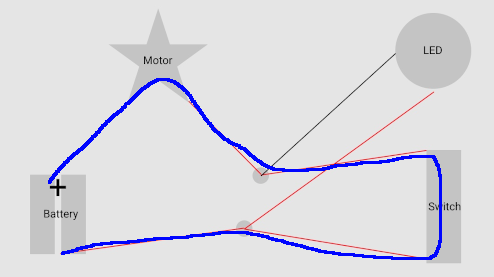 You need to re-draw the circuit to be more readable. Something like this: 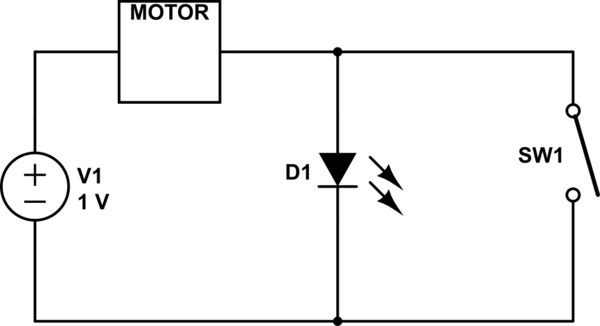 This has been simplified to match the diagram in the question. The motor needs the switch to complete the circuit. The LED, however has a return path to the negative side of the battery (GND), thus completing a circuit.

Once the switch is closed (ON) the motor has a path to GND, and the switch essentially shorts out the LED, so it is unable to illuminate.

Open the switch again (OFF) the LED is once again illuminated, and the motor no longer has a direct path to GND.

This is the simplest way to explain it to a young child without overloading them with too much information I believe.

I hope this is helpful.

If you want a function to run Motor and LED after switch is ON your schematic is incorrect. Should be similar to this (exact resistor value depends on battery voltage and led type): 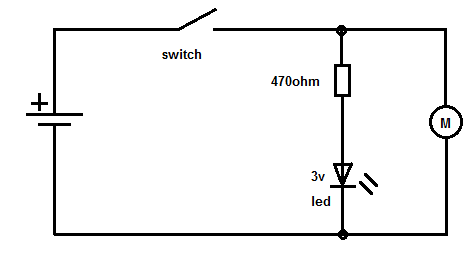 Function of switch is to disconnect the power supply from load (M and LED), another words break the current path (stop feeding them). Switch in your diagram does not break this path completelly because is not connected in series with both loads.

When switch is on, it bypasses the LED so motor is directly connected to battery.

When switch is off, the motor is not directly connected to battery any more, but via the LED. The two loads are then connected in series. The LED will light up at very small current and the motor needs high current to run but high current is not available via LED so motor does not run.

The simplest explanation is that the LED allows through enough current to illuminate itself, but not enough to make the motor spin. Depending upon battery voltage and motor characteristics, it may be possible to demonstrate this by observing whether opening the switch results in the motor slowing down as quickly with the LED present as with it absent. When the LED is present, there will be some current flowing through the motor trying to keep it spinning. This may not be enough to successfully keep it spinning, but it may be enough that the motor doesn't slow down as quickly.

If the LED is sufficiently robust, it may be instructive to hand-spin the motor in a direction opposite its normal direction of travel, with and without the LED present. Spinning the motor in this fashion should probably be noticeably easier with the LED absent than with its present, and may also cause the LED to glow more brightly. Unfortunately, depending upon the motor, battery, and LED, doing this may also over-stress the LED.

Not the answer you're looking for? Browse other questions tagged led circuit-design dc-motor switching or ask your own question.

1
Improving this current regulated LED driver circuit
0
Driving a large, noisy, free-wheeling DC motor (cooling fan)
1
help for timelapse slider motor circuit
4
How does the diode work out the reverse voltage spike of DC motor?
0
Circuit to a/b switch like a relay would. So an analog or digital signal can be turned on or off or routed
2
LED indicator - How to show 'on' when circuit is open
0
LED switching: Circuit reacts unexpected