I'm planning to build a 8x8x8 RGB LED cube run by an Arduino Uno. This is my first electronic project since highschool ~ 20 years ago so I'm more than a little hazy on the subject and may be making fairly fundamental mistakes/assumptions.

I've seen Kevin Darrah's impressive implementation and wondered if it could be improved or simplified by using common-cathode RGB LEDs. I think that by having cathode columns and each layer consisting of three anode sets (e.g. R pointing left, G pointing right and B pointing to the back) I'd be able to run it with 8 shift registers such as the 74HC595 controlling the 64 columns and three controlling the 24 anode layers. Much fewer than the 25 Kevin is using to control 192 anode columns and eight cathode layers.

So my question is two fold:

a) Is my idea sound or would common-anode be a smarter way to do it?

b) What chips would I need to be the current source and sinks given that I want to get at least 256 shades from each colour in each LED and therefore need to else turn the RGB components on/off extremely fast and the amount of on Vs off time creates a POV effect and dims/brightens the colour, or be able to control the current.

Update with diagrams Please pardon my terrible drawing skills, made even worse by doing this on a trackpad in Photoshop. 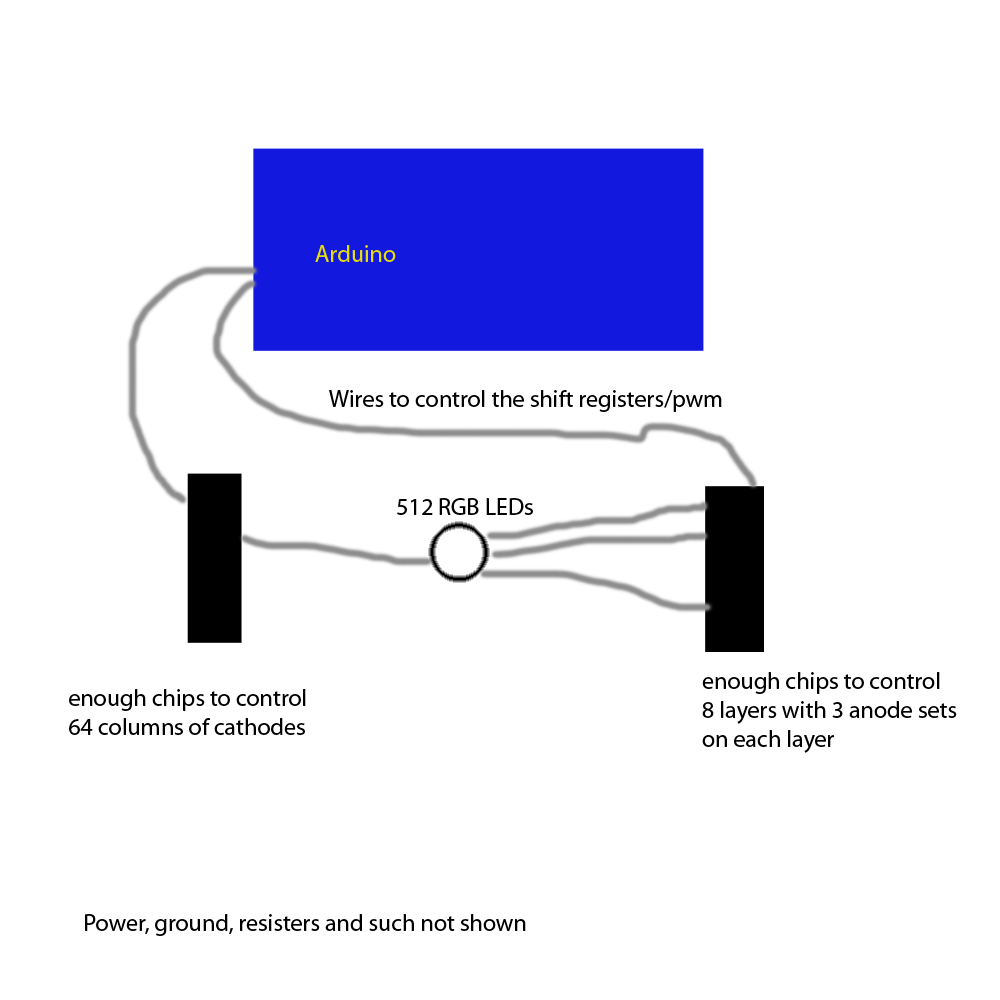 The darker colours are the legs coming from this LED. The fainter colours are the legs of adjacent LEDs. The RGB anodes all go laterally. R & G in opposite directions and blue perpendicular to that. The common cathode (black) forms the column and goes to the base of the structure. Three sides of the cube therefore have anode sets on them and act just like a regular LED cube would by activating (one colour within) that layer while the 64 columns are by the other set of chips. When one column is activated all activated layers on that column light up. 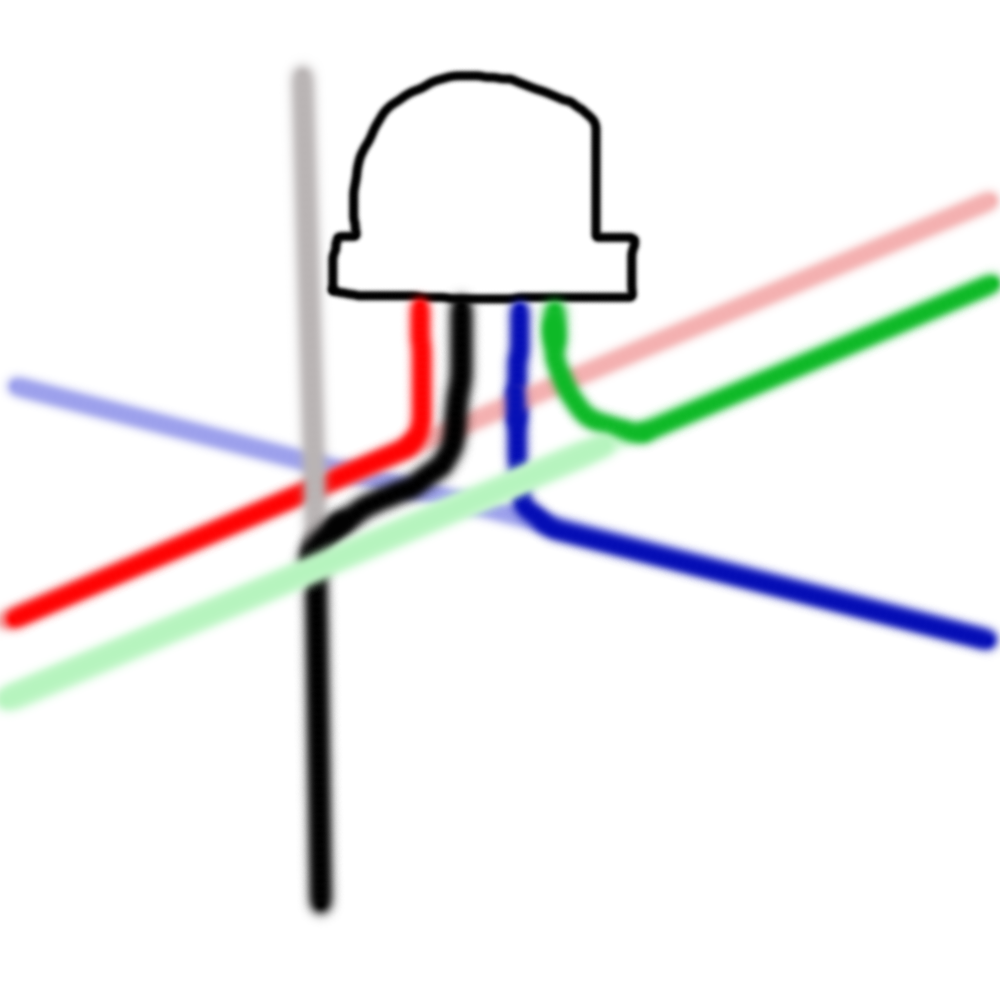 Yes, you can make an 8x8x8 RGB LED cube with common-cathode LEDs.

Unfortunately, it won't be any simpler than a similar cube made with common-anode LEDs.

The reason is simple: it can seen from symmetry that common-cathode isn't any different from common-anode except for swapping the cathode and the anode:

You could design an LED cube with fewer shift registers regardless of the choice of common-cathode or common-anode. However, you then have to multiplex more LEDs, meaning each gets a smaller slice of time in which it can be on. At some point, the duty cycle of your LEDs becomes so low that you can't reasonably make them bright enough.

I agree that building the cube with a common anode is much easier but for different reasons. Your diagram of turning and twisting of your anodes would be difficult to produce a cube that is exactly on point , straight and symmetrical . Don’t get me wrong , it could be , but I think it is much easier to have one layer for your anode and three cathodes going straight down and wired underneath your base. And I do realize this comment is about seven years late :-) And about building your cube-I have built the RGB cube and I am now encountering the same questions you had about Kevin Darrah’s schematic and the redundant MOSFET transistor. I have read over the in-depth answer that another enthusiast had given and now I understand Kevin Darrah’s reason for the MOSFET coming off of the transistors voltage. I am still trying to figure out the very beginning of Kevin Darrah’s schematic and I don’t know why he chose to use the AtMega328 chip boot loaded instead of just using an Arduino?? Again - personal preferences perhaps. Building Kevin Darrah’s RGB CUBE is certainly a lot of work but it certainly does pay off in the end in many different ways. Not only do you get an awesome electronic color project, but you get in an incredible educational experience in basic electronics. Not to mention a thorough education in the 74HC 595 shift register. Yes, there are other shift registers out there that could have been used . But hey, what the hell . It works and it looks awesome ! My personal thanks to Kevin Darah for whom I have spoken with via email. He has been very helpful in all of my questions regarding his cube of over 10 years ago. Be Well All . And Thank You.

Not the answer you're looking for? Browse other questions tagged arduino led shift-register or ask your own question.