I have a b/w camera that outputs a video composite signal. At night it works very well, but during the day it's so bright everything just turns white. Is it possible to add a potentiometer to be able to dim the brightness?

If so, what resistance value should I use and how should I connect it, in series with the video signal or a to-ground from video signal setup?

Your camera's sensor is probably saturating in daylight so attenuating the video signal would just mean that everything looks grey rather than white. The only cure is to use a lens fitted with an iris to reduce the amount of light entering the lens. Better still, fit an automatic iris lens which uses the video signal to adjust the iris aperture to keep the video level constant.

It is also possible to use neutral density optical filters to reduce the light which would be cheaper to retro-fit but difficult to make adjustable.

Changing the composite signal is not the way to go as it will render the signal useless and out of standard. Your sensor is saturating and is probably blooming. There should be AEC (Automatic exposure compensation) on the camera board that responds to the light levels and changes \$T_{int}\$ (the integration period), right now it seems that your frame time seems to be the integration period.

I had a similar problem, digitizing VHS through a composite video output using EasyCap USB dongle. The bright portions of the output were saturated white, and there was no option to reduce the brightness on the videorecorder.

I split the coaxial cable near the videorecorder, and added a series potentiometer as sketched. 2 kOhm were probably too much, but with a very slight movement, introducing roughly 50 to 100 ohm to the central conductor, the signal was attenuated to ca 50% of original brightness, which was exactly what I needed. The colours were not too much affected; I have read the chrominance is phase-encoded in the signal.

(It required some tweaking. With increasing resistance over 200 Ohm, the signal quality deteriorated, becoming blurred, dim and the colours went weird.)

Everybody would say this is not the correct way to do it. But it was perhaps also the only way, since I found no brightness adjustment in the VCR nor in computer. To conclude, nothing blew up and this utterly nonstandard and amateurish modification has fixed my problem.

EDIT: For comparison, I created screenshots of the recorded videos before and after the modification. 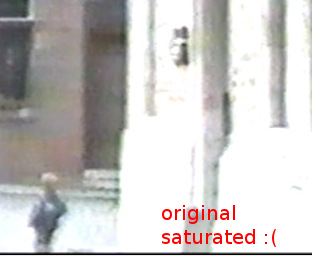 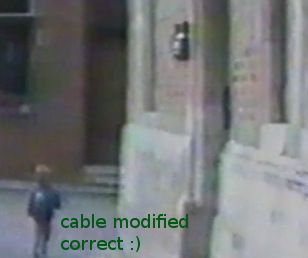 Not the answer you're looking for? Browse other questions tagged video brightness or ask your own question.