How much power do I need to transmit a radio signal through a solid ice crust 100 km thick?

Imagine I put a floating probe inside the subglacial ocean of Encelado or Europa: how much power should my radio have to be able to communicate from external surface with the probe? Or, in different words, how much attenuation do 100 km of solid ice cause to a radio signal at, say, UHF frequency?

I can't answer that directly but Nasa are probing Greenland's ice sheets with aeroplane radar to find the depth of the bedrock. Here's what they say about ice and radio waves: -

Ice, on the other hand reacts differently depending on the radar's frequency. It reflects high-frequency radio waves, but despite being solid, lower frequency radar can pass through ice to some degree. This is why MCoRDS uses a relatively low frequency—between 120 and 240 MHz. This allows the instrument to detect the ice surface, internal layers of the ice and the bedrock below. "To sound the bottom of ice you have to use a lower frequency," said John Paden, CReSIS scientist. "Too high a frequency and signal will be lost in the ice."

This came from here and it's interesting to note that this is radar and requires a reflection from the bedrock to pass back through the ice to the receiving aeroplane. I would imagine that the reflected power is a fraction of the incident power reaching the rock so maybe you might get 10x this distance thru a solid ice sheet with a one-way transmission.

Here's the sort of image they are getting: - 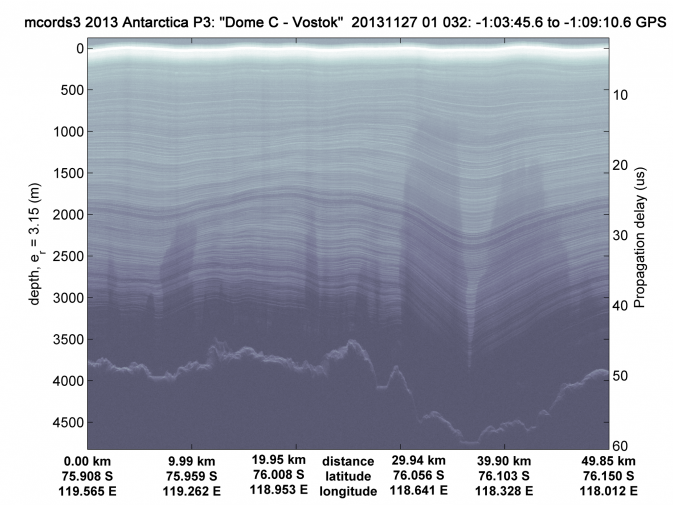 It looks to me that +3km is possible with radar. I don't know what the radar beam angle is so it's impossible to calculate what the incident power at the surface of the ice is - the transmission from the aeroplane might be a 1MW pulsed radar with a very tight beam angle producing an incident power at the top surface of the ice of hundreds of watts. Also, the reflection from the bedrock will not be a tight beam - this means the power reflected back will be spread thinly as distance increases (see Friis equations). Also the power received at the aeroplane will be much smaller than that emitting from the surface of the ice - again see the Friis equations.

I had a think about the link loss for the radar application: -

These losses won't be encountered by a simple transmission thru ice - transmitting and receiving antennas are sited either in the ice or at its surface. This all bodes well for being able to transmit in a single direction through large distances of ice.

Assuming that it behaves similarly to water ice on Earth, there were some measurements done of the RF attenuation of the Ross Ice Shelf in Antarctica. The attenuation length was found to be 300-500m for frequencies from 75MHz to 1.25GHz.

That's going to be a pretty intimidating amount of attenuation for 100km thickness (something like -950dB). Ain't gonna happen.

The power would, of course, depend on the bandwidth of signals that need to be transmitted.

To put it in perspective, the record for moon bounce communication is something like 3mW transmit power (~ -300dB attenuation). If we had 1GW, that would be another 115dB, but still well short of what's required. 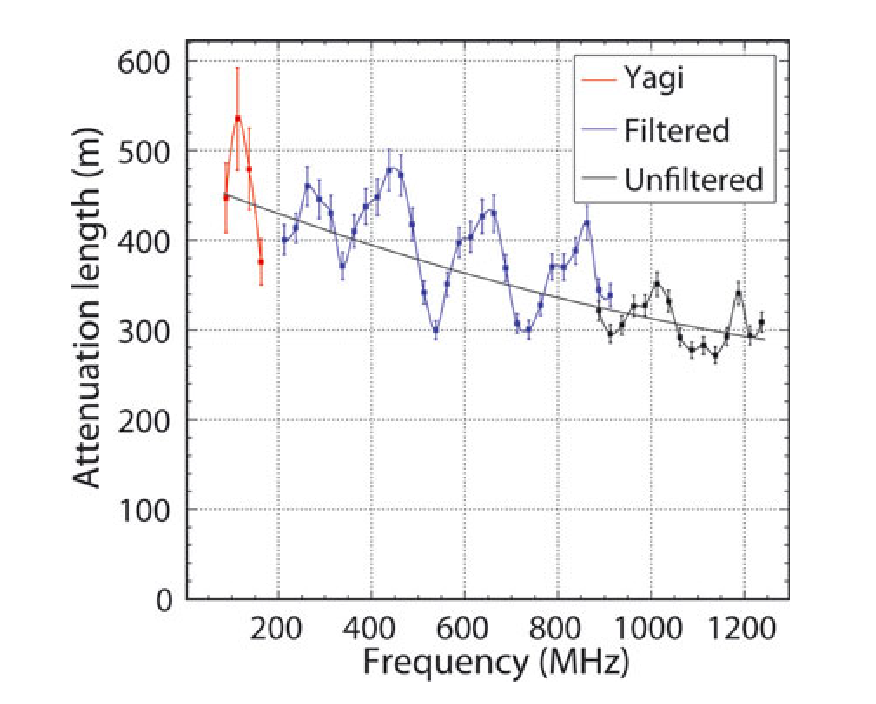 Currently I'm operating as a radar engineer for the British Antarctic Survey so I think I can help.

Frequency is important Ice is ( other than some specific gaps) none blocking at MF frequency's but at HF and UHF ice and water are very similar, near enough impenetrable.

If you kept you frequency low enough (below 2.4Mhz) than I think that ( assuming the ice where you are talking about is water based) going to have few problems with ice... your still transmitting to space and MF signals are fairly poor for that mainly due to ionospheric interference on earth. I know that Earths magnetic field is very powerful so maybe on some bodies you could get away with it.

Either way I think your primary issue could be finding a single frequency for which you can pass through the ice and any atmospheric disturbances. that would certainly be the problem on earth

Not the answer you're looking for? Browse other questions tagged rf communication or ask your own question.

1
Unterminated RF Combiner Input Port
0
Where should I start troubleshooting a CC1310 radio design?
0
How to insert background EM noise into pathloss equation?
1
Why is my RF circuit behaving like this?
1
RF noise on different WiFi adapters
0
Oscilloscope amplitude reading depends on cable length? Reflection help
7
How does someone design a low frequency FM radio transmitter?