Transmitting HDMI/DVI over an FPGA with no support for TMDS

I'm hoping to be able to output HDMI/DVI-D for my next FGPA project but my FPGA doesn't have native support for TMDS outputs. The FPGA is a Spartan 3E and I believe it only has support for LVDS differential signalling.

I read a lot online about differential signalling and I have a general idea of how it works but I am confused about the different standards. I have also gone through the specifications for HDMI but it's very dry and seems to presume a certain familiarity with these concepts beforehand which I don't have.

For example, what exactly is TMDS vs LDVS? Is TMDS just an encoding scheme run over LVDS? Are TMDS and LVDS just standards for differential signalling but with different electrical characteristics? The absence of search results for LVDS to TMDS converter chips suggests my understanding is broken here.

In a practical sense, I am wondering if I can simply wire an HDMI breakout board directly to the input pins of my FPGA, configure those pins to the LVDS IO standard and expect it to work (given that the software side is written correctly). Some websites imply that I can but it seems that their FPGAs all have built in TMDS drivers where mine doesn't. Other sites say that I need TMDS support but then go onto say that LVDS works too. Wikipedia seems to suggest that LVDS is being phased out as a standard for transmitting data over DVI or HDMI.

Can anybody help me clear up any misunderstanding on how all this works?

Good questions. I have been researching this topic myself recently, and will try to provide some brief answers here.

what exactly is TMDS vs LDVS?

Then there's the question of TMDS coding. The Spartan-3E IOBs have support for DDR, with data rates up to 628 Mb/s, but no dedicated high-speed SERDES logic. You would have to do the TMDS encoding and decoding in the FPGA fabric, using the DDR support in the IOBs to get the final bitstreams. This would limit you to pixel rates of 62.8 Mp/s or less.

In a practical sense, I am wondering if I can simply wire an HDMI breakout board directly to the input pins of my FPGA, configure those pins to the LVDS IO standard and expect it to work

No, not on the input side, at least not without some effort to terminate the TMDS properly and then AC-couple it with proper bias to the LVDS receivers on the FPGA (all of this while maintaining an accurate 100Ω differential impedance). Note that the sample projects you link to are all output-only examples. Driving DVI/HDMI from an LVDS output seems to be much more forgiving; they don't seem to have added any bias or termination resistors to their PCBs.

Your best bet would be to use external DVI/HDMI input and output chips, and make the connection to the FPGA via their parallel buses. I have used Analog Devices parts in the past.

TMDS uses CML (Current Mode Logic) that is terminated to Vcc at the receiving end. LVDS from the standard (IEEE644) is a voltage mode driver that is terminated across the pairs also at the receiving end. But it's not as simple as that, as LVDS drivers often control slew rate on transitions to prevent ringing and other nasty effects, and during this mode the driver acts more like a current source.

However, on a strict reading these two standards are different and incompatible. the encoding scheme on top of this physical layer (8b/10b DDR etc.) are logical operations.

There are translator chips (one from TI is SN65CML100) so you could add that to the board. Interestingly this chip can also be a CML to CML bridge, so there is probably some good reading from that data-sheet that will get you further along in your understanding.

Given that you are looking at receiving TDMS into a DVI input, it's possible it will work. Ideally you'd terminate the pair to Vcc but the LVDS will probably have a termination cross phase built into the device that can't be removed. So that is a complication as the termination will be the wrong value and you'll have a resistor divider on your input.

And finally, here is a link to an app note from Ti (again another pdf) and it meantions the termination above. but there is a note:

so the common mode range of the LVDS receiver is important. They also don't show internal termination, which may be an issue for an FPGA. Here is the snipped picture from that app note. 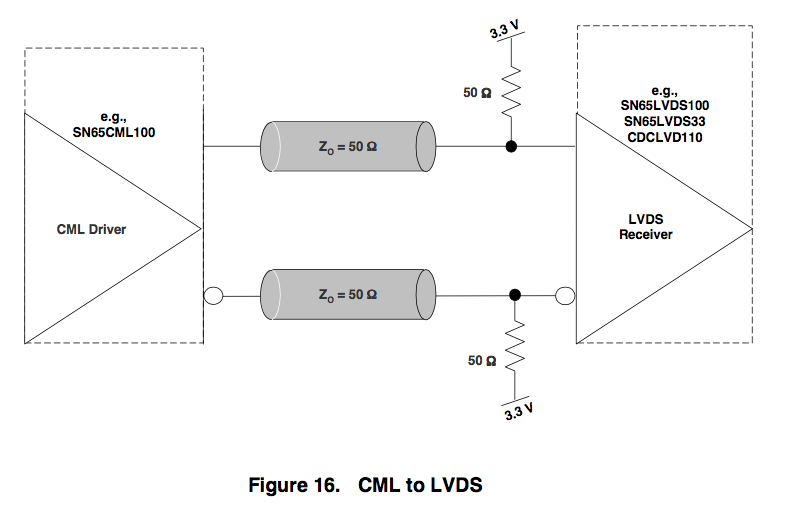 If the LVDS input accommodates multiple voltage swing ranges then you might be lucky. Some "LVDS" operate on only 500 mV swing for example.

Not the answer you're looking for? Browse other questions tagged fpga differential spartan hdmi lvds or ask your own question.

-2
How digital video is processed?

0
Why Differential Standards do not exist in FPGA PlanAhead?
2
Is TMDS really differential?
2
FPGA - Injecting an overlay into an HDMI stream
0
What is the best method to transmit a DVI-D video signal from a FPGA?
1
How to make a HDMI signal be identified as HDMI instead of DVI?
1
Is the TMDS intended for long distance transmission?