Do I really need the open loop output impedance of an op amp?

There are several answers on the internet and here on how to calculate the output impedance of the opamp with a given feedback.

My intention, though, is to find this value with an open loop configuration because is considered before feedback connection of the output. Like here, the output resistance saw before the Cgs:

Someone says that is written on the datasheet, but also could not. In this latter case we should need the internal circuitry to estimate it. Is that true? If so, how can I find this value from, for example, an LM324? That impedance seems to be not present inside the datasheet.

Open-loop output impedance of a opamp is rarely, if ever specified. However, the maximum current source and sink capability usually is.

In reality, the impedance won't be infinite, but you don't know what it will be. CMOS output opamps probably look mostly resistive, but the current source model may actually be closer for bipolar output opamps.

In any case, don't try to read into the datasheet what it doesn't say. You are only guaranteed what it guarantees. Assume the current source model when designing the circuit, and everything should work. If you design the circuit right, the open-loop output impedance will be irrelevant anyway. In the closed loop case, the output impedance, like the gain, will be governed by the feedback.

The usual assumption is that it's less than 100 ohms for normal (not very low power) op-amps and often much worse for very low power op-amps. You may be able to find an estimate of the nominal value by reverse-engineering the SPICE model (although the below-linked article from AD indicates that the modelling of Ro may be quite inaccurate).

It's an important number (especially the upper limit of open-loop output resistance) if you anticipate substantial capacitive loading of the op-amp and wish to evaluate stability, but unfortunately it's not generally directly guaranteed. You typically will find some guarantee of stability (such as phase margin) with a given capacitive loading in the datasheet. From that, you could work backwards to a limit on the output resistance.

As Olin says, it's bad engineering to depend on parameters that are not directly or indirectly guaranteed on the datasheet, so it's best to isolate that capacitive loading or otherwise make the circuit relatively insensitive to output resistance so even if it turns out to be relatively high your circuit will still work to specifications.

Edit, re your edit:

The open-loop output resistance can affect the stability of the circuit, especially with capacitive loading, because it puts another pole in the feedback path. If this is a consideration, you need to have some idea of what that resistance is, even though it's not directly specified on the datasheet, so it's a good idea to have a rough idea of what the nominal and limits are, otherwise you're just guessing that it will be stable. In the case where a resistor and AC feedback is used to stabilize the circuit (called in-loop compensation), you still need to have some basis for picking the value of that resistor. Is 50\$\Omega\$ okay, or must it be 1000\$\Omega\$?

Aside from stability considerations, normally we don't need to think too much about the open-loop output resistance of the op-amp- it's effectively reduced by the gain, so it tends to be negligible if the amplifier gain is high in comparison to the required accuracy.

As Olin says open loop output impedance (\$Z_o\$) is rarely specified. It's because it's not just a constant resistance,but usually a function of frequency and temperature, and also not really linear. As Spehro says, it's not much of a care about, except for stability or driving capacitance. But since it looks like you are trying to control a FET with a LM324, you will probably care about it a lot. 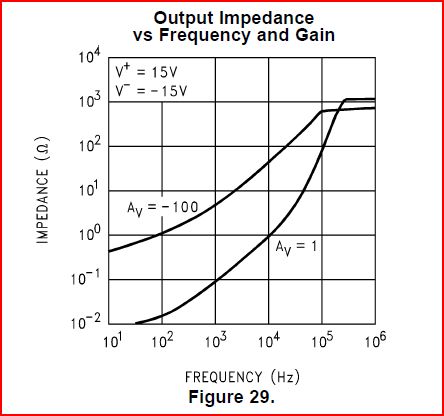 A curve like that of \$Z_{\text{oCL}}\$ is usually the best information that you will get from a datasheet.

Not the answer you're looking for? Browse other questions tagged operational-amplifier impedance output or ask your own question.

15
Stability problem in unity-gain opAmp
2
Inverting Op Amp: Why does current flowing into output seem to magically reappear at ground?
2
How do I determine \$R_o\$ for an op amp?
1
Incorrect voltage readings from ADC and op-amp
0
Closed-loop gain with source degenerated amplifier