I just completed an introductory course in digital design. During the course I designed a circuit for driving multi-color LED's with an automotive application (for a personal project). The following is what I made: 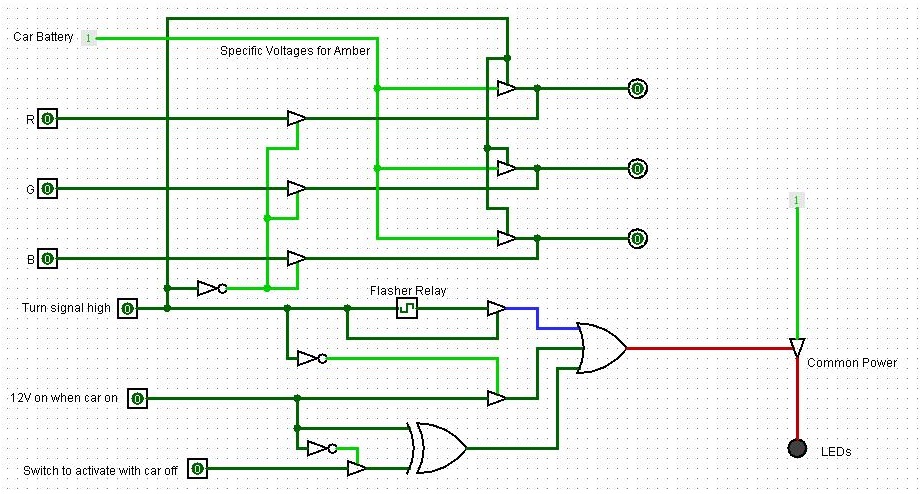 The circuit basically turns the LEDs amber and makes them blink when the turn signal comes on. After designing the circuit I decided that I wanted to control enough about 450-500 LEDs with it. The LED strips I'm using are set up for 12 Volt power sources and 450 of them would require 10 Amps.

I'm including the datasheet for the strips themselves (even though it isn't all that informative): LED Data Sheet

I did some research and it seemed to me that transistors were the thing to use for switching given the 12V 10A load. I should note that the control circuit will be run off of a 5V regulator and the LEDs off of a 12V regulator. At least that's the plan.

So here is the circuit after labeling where the transistors will be (labeled as "Trans."). 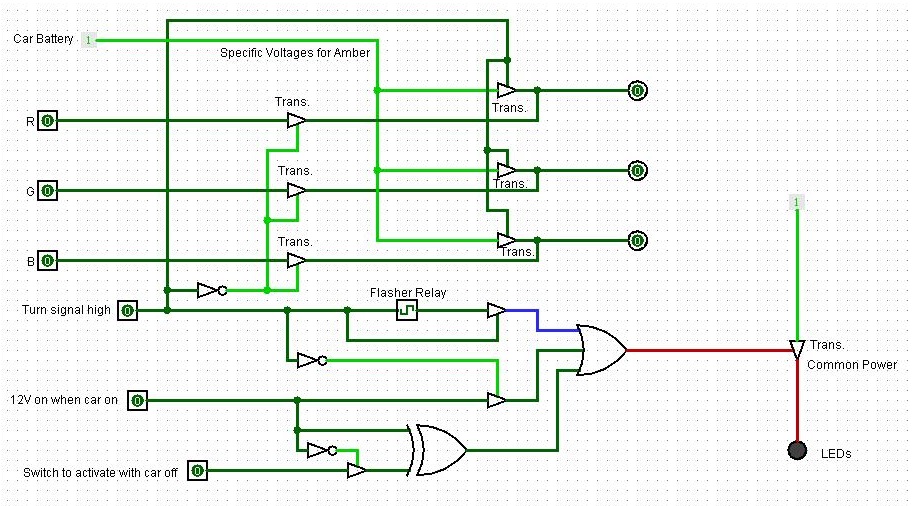 Now the task of transistor selection arose and I'm struggling because I am in entirely unfamiliar territory. I need to measure the output from the turn signal before I can select those transistors, but I can select the transistor coming from that OR gate. Here is the OR gate I'm planning on using: OR Gate

I have to say I'm slightly confused that there is a negative value in the "Maximum High Level Current" category. Other than that I know I need to select an appropriate Hfe and I'm fairly sure, based on my reading, that I want an NPN transistor.

Any selection advice is very much appreciated. I realize that there are other more common ways to run LEDs like PWMs. I used combinational logic because it was the only thing I knew and it still is the only area of electronics with which I have any experience. I am willing to consider other methodology if I really should, but the functionality I'm making is fairly simple and I feel like I'm just a few components away from making it work. I'm open to all commentary, suggestions, advice, et cetera. I'm totally new to electronics so I may have to ask for further explanation of some comments, but we all have to start somewhere!

For what you're doing, you're gonna have to rethink a bit. From the data sheet, it appears that each 2" segment looks like

Since each LED should have a current-limiting resistor, you'll need 450 of them, about 500 ohms, 1/4 watt each. The resistors will need to be mounted somewhere where they have good airflow, since they will dissipate about 100 watts total. (10 amps times 12 volts is 120 watts, and it's got to go somewhere.) Just bundling them together and putting them in a hidden box is almost certain to cause Bad Problems.

except extended to 150 units.

Each of the 3 drive lines needs to provide 12 volts at about 3 amps, or you can drive all 3 simultaneously with a total of 9 amps, so a 10-amp supply will probably do. There is a small chance, though, that driving all the LEDs on may draw slightly more than 10 amps, and the power supply will get unhappy. I don't have enough information to be sure. If you want to play it safe, cut back on the current a bit and use something like 560 or 620 ohm resistors. You may even want to mix values a bit to produce different drive currents, in order to get just the color you want. Experiment on a single segment before you commit to a final design. Be aware, though, that if you drive all of them the result will be (approximately) white. If you only want to produce amber light, don't turn on the blues. As a matter of fact, if you only want amber, forget about hooking up the blue leads entirely and cut your workload by 30%.

Your logic schematic is not ideal in this case, since your master drive could easily be folded into the 3 color drive signals, but I'll keep it anyways.

The master drive is relatively easy, and can be done with an NPN transistor, or actually with an NPN Darlington (you won't get 10 amps with a single stage driven by LSTTL logic). What you really want is an n-type MOSFET. Your drive circuit would look like 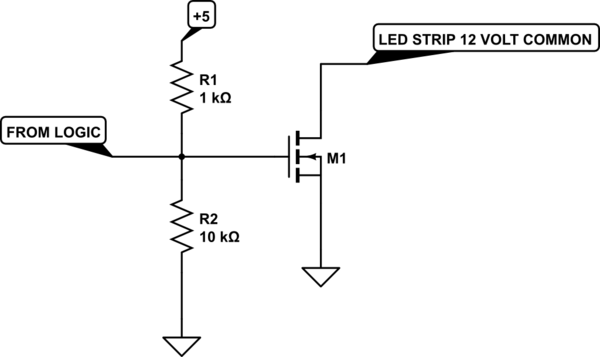 The MOSFET should have a current rating of 20 volts or better, and 10 amps or better. However, that is very modest as MOSFETs go.

The 3 color channel drives are a little trickier, and for these you need p-type MOSFETs. The circuit is complicated by the fact that LSTTL will not handle 12 volts on the output without Letting The Magic Smoke Out, so you need to make slightly more complicated switches. 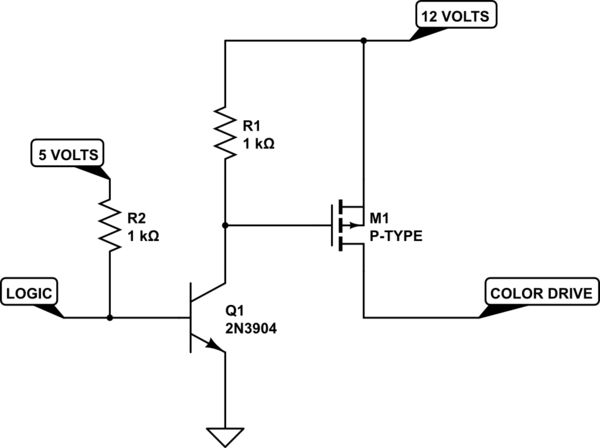 I've shown the NPN buffer transistor as a 2N3904, but almost any small-signal NPN will do. 2N3904s are cheap and readily available. Try someplace like Jameco.

I hope this helps.

Not the answer you're looking for? Browse other questions tagged led transistors control-circuit or ask your own question.