How to detect reverse-polarity post-mortem?

There are many questions here about preventing reverse-polarity, most of them ending up with a series FET that is driven by the opposite supply rail:

However, I'm working on a product that has this: 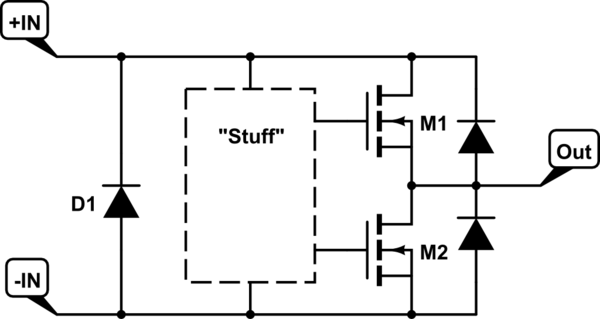 So the idea here is that when Customer returns a unit because "Stuff" no longer works, D1 can be inspected to see if the polarity was reversed. Not the way I would have done it, but that's how it is.

Unfortunately, D1 has a tendency to survive unharmed according to my post-release bench tests. It's presently a 1N914 in a SOD-523 package subjected to a ~0.6 Farad capacitor at ~12V. I've looked at:

Everyone seems to be okay with the idea of letting Customer blow up his unit and us detecting what he did, so I guess I'm just looking for a cheap, reliable way to deny a warranty claim. Comments, suggestions please? 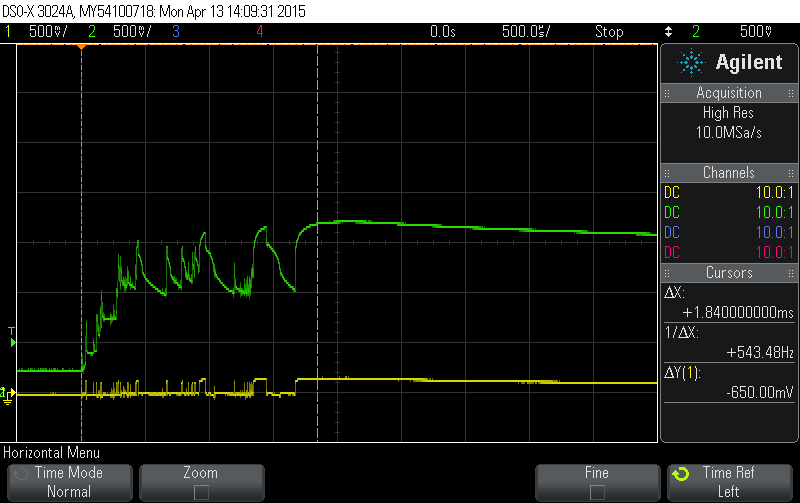 500mV/500us per division, yellow and green traces are directly on either side of D1, mechanically switched with resultant sparks, exponential decay following this

Thanks everyone for the quick replies, but I would like to remind you that reverse-polarity protection has been rejected by my superiors because it's "too different from what's already there" and/or "too lossy". Personally, I would much rather do that than post-mortem detection, but that's what I'm stuck with. Sorry guys.

Basically all I can do is replace D1 with some collection of 0603-ish or smaller components to make something that is easily identifiable if it was ever powered backwards. There are schottkys and there are fuses in that size, and it looks like I'll have an assortment of them later this week, but I'd also appreciate a backup plan and I'm almost drawing a blank right now.

My other idea is a FET-based fuse-blower, but I can't think right now of how that would work. Depletion-mode FET, perhaps?

Okay, I got my parts, did some testing, and I'm a bit puzzled now as to why it doesn't blow the fuse. According to my 'scope: 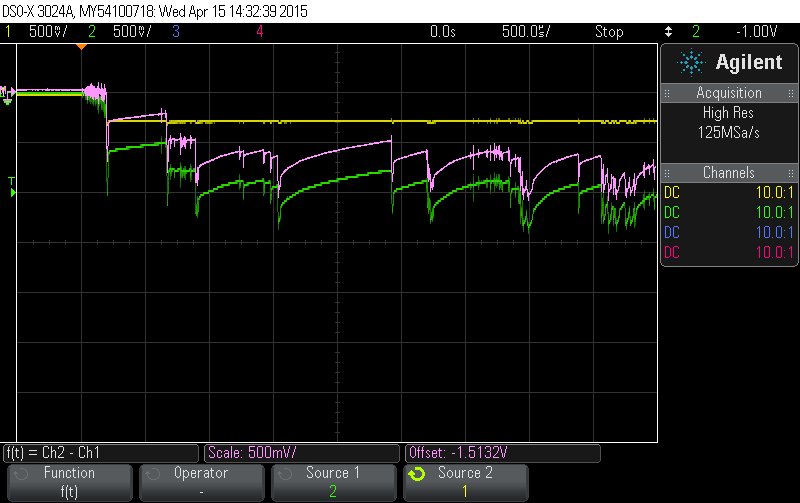 (okay, so I didn't hook it back up EXACTLY the same way, but the same information is all there)

This test is only the last in a series of reverse-polarity zaps using my ~0.6 farad capacitor recharged to ~12V each time. The fuse measures ~2 ohms afterward and has no visible damage.

So, with that being the smallest fuse that I found on DigiKey, and the diode having one of the lowest forward voltages at a decently high current, I'm not so sure that the whole diode+fuse idea is going to work at all. At least not with ~1.0-1.5V as clamped by the power FETS M1,2.

I've also thought some more about the depletion-mode FET idea, and I think that'll fail in the correct polarity by becoming a constant-current source through the fuse. If that idea is going to work, I think I need an equivalent to a FET but with an inverted response to the gate voltage. Enhancement and depletion mode have the same polarity of response in that "towards the drain voltage" turns it on, but the offset is different so that the E-mode is default off and the D-mode is default on. This idea needs a depletion FET with an inverted/reverse response in that "away from the drain voltage" turns it on, which I don't think exists. 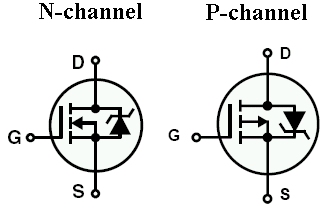 Dwayne Reid's idea of a series fuse is becoming more attractive now, even though it violates the requirements of how I'm allowed to modify the circuit. But before I call it impossible and say that we have to do that, does anyone have another idea to quickly, reliably, and permanently detect -0.7V or so and ignore +0-50V?

Schottky diode- a hefty one such as this. The 1N914 can't conduct enough current to protect the MOSFETs. There are cheaper 10A ones- do a parametric search.

But it would be nicer to use a series MOSFET (or a unipolar TVS and a polyfuse) and protect the product against reverse voltage. Every customer who has a warranty claim denied is a potential source of a lot of bad publicity, even if it was entirely their negligence that caused the issue.

The 1N914 has fairly high voltage drop at high current (~1.4V at 800mA) so it probably won't keep the reverse voltage down low enough to prevent damage to other devices. I would replace replace D1 with a Schottky type (eg. PMEG2010) which should conduct at lower voltage and higher current than the devices needing protection.

You could combine this with a regular fuse, a polyfuse, or even just a narrow PCB trace that blows out at high current.

How about a large fuse in series with the power supply input?

If they blow that fuse, then they did something bad.

I would go with a surface-mount fuse that is sized not to blow until the FETs are about destroyed.

I think I'm going to give up on this and declare it to be impossible with present technology as I know it. There may be a solution, but it's not worth chasing anymore.

I've upped the ante to 2.5 farads, nearly 25 volts, and a much bigger switch, and all I did was make a bigger spark. Every detection scheme that I tried survived except for one diode+fuse arrangement that then survived when the fuse was replaced and zapped again.

For your viewing pleasure: 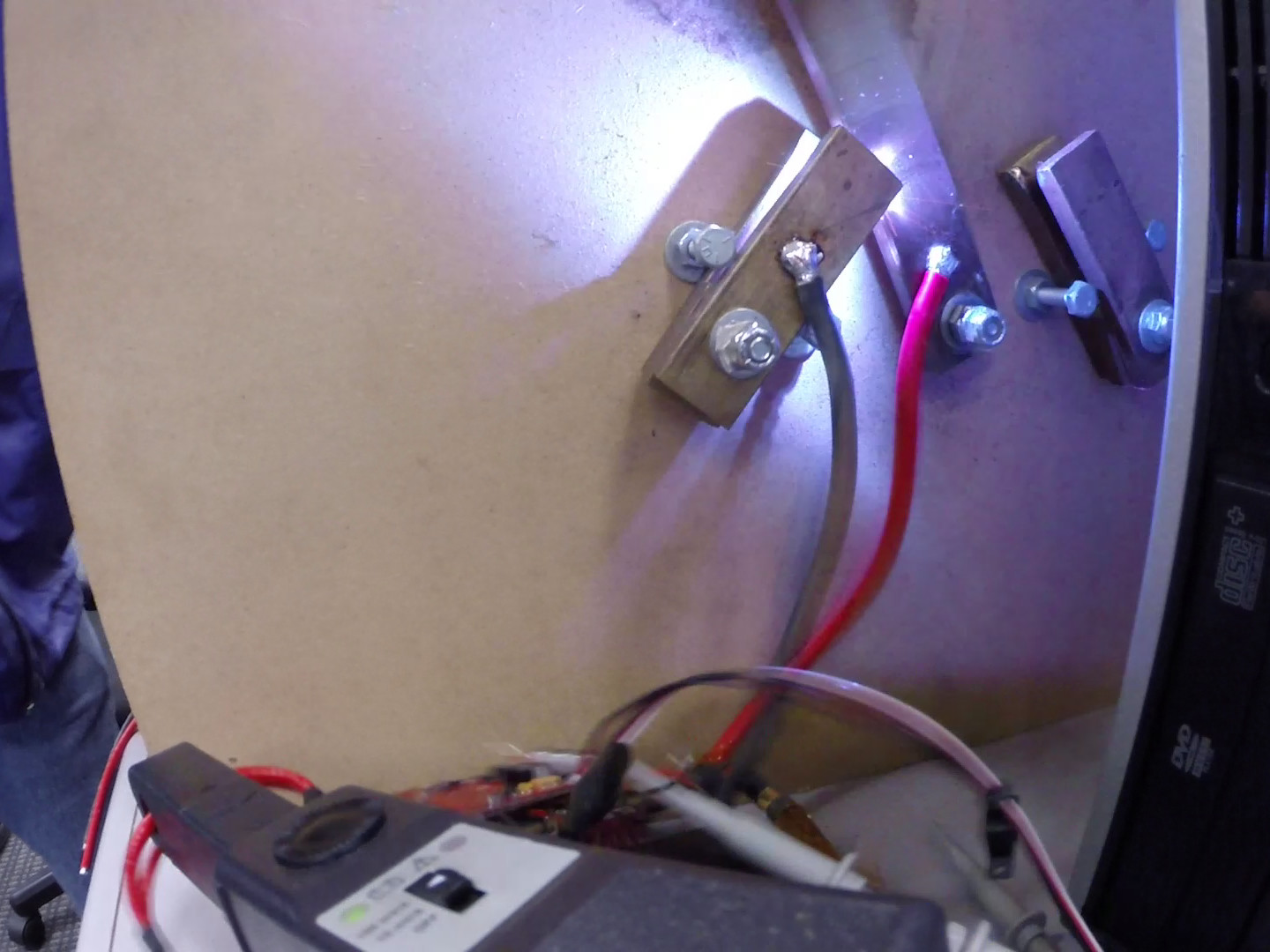 This was 2.5 farads at 22 volts. The black thing in the foreground is a magnetic DC current probe. The diode+fuse showed no sign of stress. 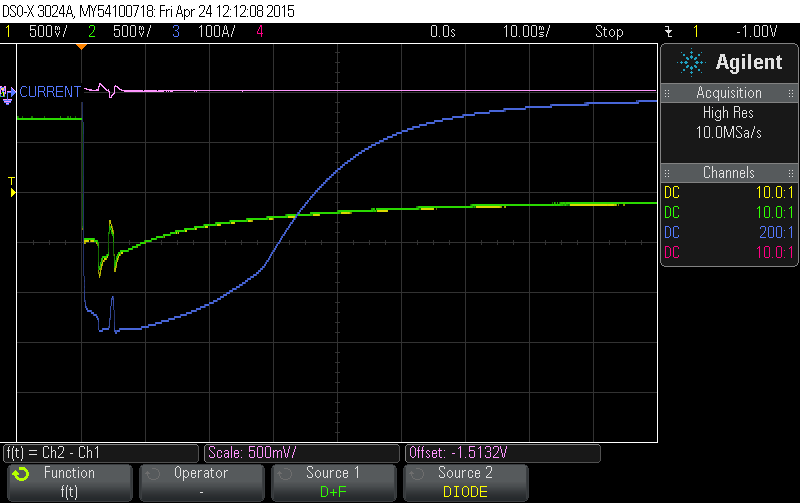 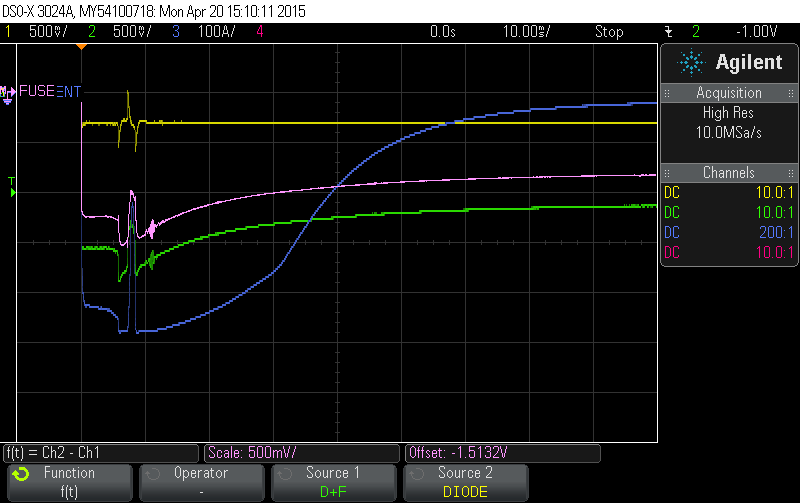 These were two different diodes, one chosen for low forward drop, the other for high current, both in series with a fuse. The high current one didn't even power the fuse. Using the low-drop one, I suspect that the fuse increases resistance as a thermal function so that it requires more voltage than my setup allows to burn a 62mA fuse.

The current probe goes non-linear at super-high current, which probably explains the kink in the middle of the blue trace. It's measuring the total current, the vast majority of which is taken by the FET diodes M1,2.

So I guess there are two morals here:

Not the answer you're looking for? Browse other questions tagged design reverse-polarity or ask your own question.