Why PNP transistor might be opened even though (almost) nothing is connected to the base?

I have a simple printed circuit board with simple circuit on it. Very beginner. No SMD.

As a part of this circuit I have transistor BC557.

If I don't solder the base pin of this transistor and test the circuit then transistor is closed (as expected) but when I solder it to a path on the board that has nothing else soldered to it (there were two resistors but I desoldered them) then the transistor is magically open now.

Transistor operates on voltages around 16V (on emitter) and on very small currents. The only load between collector and the mass are in parralel: 100k resistor and MOSFET gate-source.

Can printed circuit board be leaky in a way? Somehow allowing some current to flow from the base that's not connected to any other component?

Adding 1uF capacitor between base path and emitter path on PCB doesn't seem to help.

I noticed that if base is left unsoldered and I touch it with a screwdriver I'm touching with a finger then the transistor opens sometimes, even if I don't touch anything else in the circuit at the same time.

Can I somehow make it less sensitive?

This behavior didn't occur when I had same circuit powered by the same battery and tested with the same load but on breadboard.

The circuit I'm trying to build is that one: http://serwis.avt.pl/manuals/AVT746.pdf 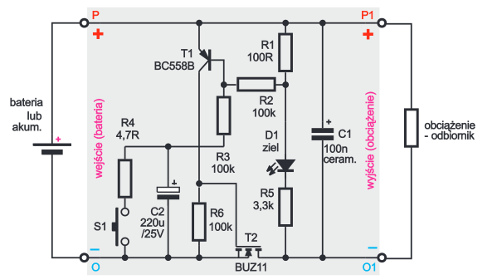 And it worked on lower voltages (less than 9V).

I tried putting 100k resistor between emitter and +16V but it doesn't seem to help either, transistor still is open when base is soldered to unconnected path (but it caused MOSFET to overheat, even though the sorce-drain current is just 2A).

I also swapped the transistor for another one (same) to rule out damaged element.

BTW This circuit cuts the battery power to the receiver on the right after a delay roughly controlled by C2. It turns it back on after pressing the switch. Cool thing about this one is that it can turn on an off large currents (in theory up to 30A) and work with voltages from 6 to 16V.

I replaced switch with transoptor (+480 Ohm resistor in series) so I can control this circuit with another one.

Could be leaky, could be pickup of AC hum from the mains or RF from AM radio etc. as the transistor will act as a detector.

To tell the difference, put a 1uF ceramic (low leakage) capacitor from base to emitter and see if the issue disappears.

In any case, you can reduce the sensitivity simply by connecting a relatively high-value resistor from emitter to base. Something in the range 10K-100K will likely work for you.

Edit: One thing that can cause a great deal of leakage is the use of acid-core (plumber's) solder. If this is accidentally used, clean the board with warm soap and water, preferably followed by isopropanol alcohol. I have seen mains circuits burn up as a result of this. As an aside, the solder used in plumbing was often 50:50 PbSn, so it would not solder as nicely (and will require much higher temperatures) compared to good electronic grade 63:37 solder.

Not the answer you're looking for? Browse other questions tagged transistors pcb mosfet pnp or ask your own question.

0
Help with my PCB connection. Seems reversed
3
How does this automatic emergency LED work?
0
Circuit works with BC557 PNP transistor, but not TIP32C?
2
Why do transistor transmitters not have base resistor connected to collector instead of vcc?
2
Finding the Base-Emitter Voltage in an NPN Transistor
2
How does the PNP transistor in this IR receiver circuit work?
2
Is pulling current from Collector to Base allowed? (PNP transistor)
1
Why is my transistor switched on even though the collector is not connected
1
Calculation of the capacitor value across the base and emitter to avoid unexpected turn ON of transistor