What would be the least expensive way to boost a DC voltage?

Also, what would be the maximum current one could draw safely from an alkaline battery, after boosting it to 3.3 V/6 V?

Finally, how I could compute the duration for which the alkaline battery would last, given a certain consumption?

There's a technique called a charge pump with which you can make a voltage doubler, but that will only give you 3V from a 1.5V cell, and even less from the 1.2V cell. I'm still mentioning it because several microcontrollers these days will work with voltages down to 2V. A charge pump can only supply limited current, enough to power the microcontroller, but extra power devices like motors or relays are out. The voltage will also drop under load. So not ideal. The LM2660 is a switched capacitor charge pump.

The better solution is a switching regulator. These exist in two major topologies: "buck" to go from higher to lower voltage, and "boost" to go from lower voltage to higher. So you want a boost regulator. Major manufacturers include Linear Technologies (more expensive) and National Semiconductor (recently acquired by Texas Instruments). The LM2623 can operate on input voltages as low as 0.8V.

To make a higher power voltage from a battery like that takes a particular type of switching power supply called a "boost converter". This uses a inductor to make spurts of higher voltage. The concept is the same how a hammer makes spurts of much higher pressure than your arm can deliver to the nail directly.

There are chips out there that integrate much of this. Linear Technologies, ST Micro, TI, and various others make such chips. Some of the offerings from Microchip are quite nice within a narrow voltage range as you have.

Making higher voltage is OK, but these chips are still limited to the basic laws of physics. They can't provide more power out than in. Since power is voltage times current, the output current must go down as the voltage goes up. Just like with the hammer, your arm has to put in much more motion than is imparted to the nail in return for higher force out. Of course there will be some loss too. Anything over 90% is quite good. Let's say for purpose of example that your boost switcher is 80% efficient and it is making 3.3V at 100mA out from 1.3V in. 3.3V * 100mA = 330mW. Accounting for the loss in the switcher, 330mW / 80% = 413mW in. 413mW / 1.3V = 317mA, which is the current that will be drawn from the battery.

In this example, the battery current is 317mA, which is within range of what a AA type can sustain for a while. To get some idea how long the battery will last, you have to look at the battery capacity. This is expressed in current*time, like mA-hours. Let's say your AA battery has a capacity of 2 A-h. At first approximation, 2 A-h / 317 mA = 6.3 hours run time. However, there are a lot of things that mess up this basic analisys. For one thing, the current won't be 317mA over the whole discharge life of the battery. As the battery voltage gets lower, the switching power supply will draw more current. Temperature also greatly effects battery capacity. If this is meant to run outdoors in a cold environment, you might only get 1/2 or less of the rated battery capacity. The current itself effects capacity too. 300mA for a AA is probably not to the point where it degrades capacity significantly, but 1A certainly would be. You might get 2.0 A-h at 300mA, but only 1.6 A-h at 800mA. I'm making up numbers. These are probably not totally ridiculous for most AA batteries, but you really have to look at the battery datasheet yourself.

Answers given will either not work in the real world versions of what you describe or are far from lowest cost.

Steven's LM2623 datasheet is a reasonable choice and will start on 1.1V and run on 0.9V but the IC costs about 60 cents.

If you genuinely want lowest cost then a properly engineered version of the Joule Thief is a good candidate. I use that name as it will lead you to many many variants but the original form is not very efficient. However, once you have the idea you can look at the options and choose one.

The "Joule Thief" is a one transistor self oscillating boost converter using an inductor main winding plus an inductor feedback winding. For DIY use you could build one for free from almost any modern scrapped electronic device or if buying new or surplus parts could build one with 10 to 20 cents of parts.

Here is a good example of a DIY Joule Thief page

The composite image below is made of 3 images from the above page:

Others - You can build boost converters with one transistor and two separate inductors - advantage is no need for two windings. And The classic Colpitts oscillator uses an untapped inductor.
A number here and

A few zillion others 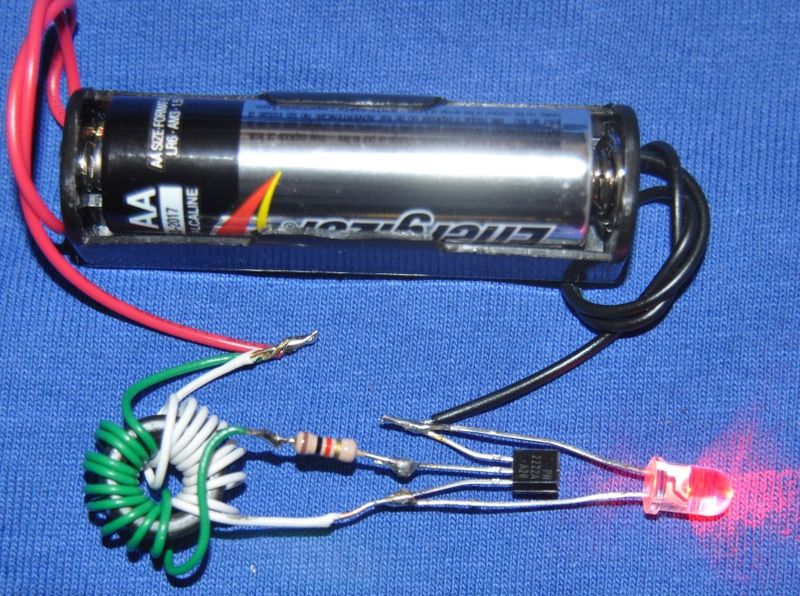 The basic Joule thief is not a marvellous design. It's outstanding feature is that it does work in many cases, thereby introducing energy conversions, SMPS, boost converters and more to many relatively inexperienced and uneducated electronics dabblers.

Various thoughts on regulated versions can be found by looking throiugh this collection (YMWV).

I stumbled upon a few prior stack exchange Joule Thief answers that seem to have some relevance. Searching for "Joule Thief" on this site will turn up a few more.

How can I calculate a Joule Thief

alternative fix to: How can I calculate a Joule Thief

The cheapest ICs for boost converters I know are the 34063 and the MCP1640. The output of the MCP1640 only goes up to 5V, but it is more efficient and seems easier to use (fewer external parts) than the 34063, except that the MCP1640 is only available as SMD. 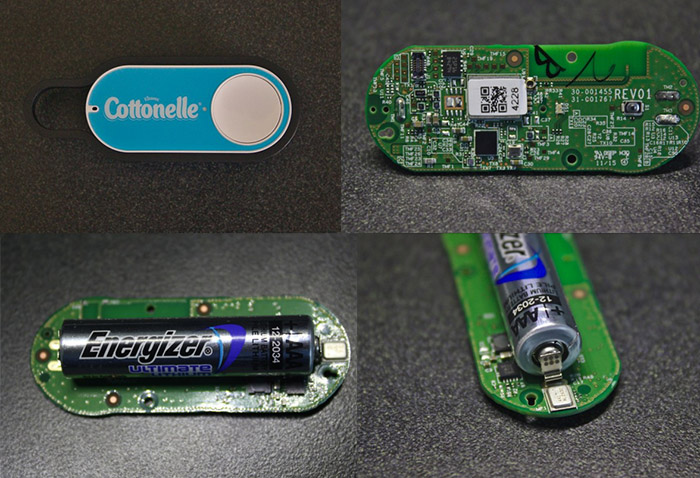 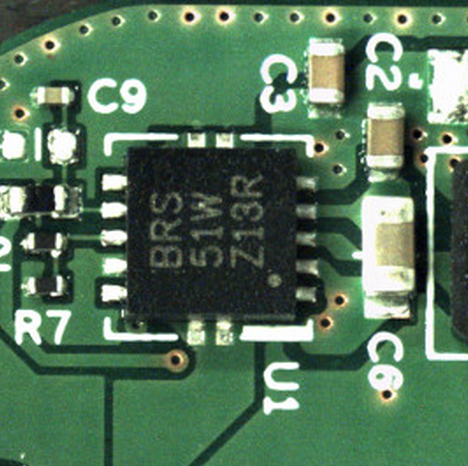 [It was] pointed out that U1 is probably a TI TPS61201 boost converter; the footprint, package markings, and pinout seem to fit.

There are plenty of cheap and cheerful (or nasty maybe?) circuits on eBay or AliExpress if you search for a "USB Boost Circuit" or similar. These sell as a finished device for $0.30 - $2 depending on how many you want, are usually around 25mmx19mm, and if you look carefully at the photos you can sometimes read the control IC product code and work out what it is (although better yet some AliExpress suppliers will provide the datasheet in the listing). Pretty much every one of these will have a resistor divider which scales the output voltage to a reference voltage and changing the resistor on one leg of divider will let you get 3V3 instead of the 5V they ship as.

I bought 50 to get the price down, desoldered the USB sockets, soldered on double AA holders (at $0.19), and now I have a stash of cheap power supplies that I can set to whatever voltage I need for a project. I don't think you can really beat $0.50 per power supply.

ETA: You shouldn't need the datasheet to find the voltage divider or calculate the new values for it, it should be obvious which is the divider (i.e. a pair of resistors from one IC pin, one resistor to ground one to output voltage) and the reference voltage they are targetting can be calculated from the existing divider and the 5V output currently set. On mine for example I have a \$15k\Omega\$ to ground and \$47k\Omega\$ to output so I have a reference voltage of \$\frac{15}{47+15}\times5V \approx 1.2V \$, and thus to get 3V3 output we can (by happy coincidence) swap either resistor for a \$27k\Omega\$ depending on whether you want to be marginally higher or lower than 3V3.

Consider switching to a battery in the voltage you want, and possibly a second one for the buzzer.

(If you actually need 1.2V/1.5V for something else in the same circuit, than this does not apply)

1
How to power a 12v outdoor project with microprocessor?
3
Boost DC voltage converter for wireless temperature sensor (1.5V to 5V)
0
What drawbacks to bucking, then boosting the same current?
0
Alkaline Battery for Boost converter for 1000ma current requirement?
84
Batteries. Why use 9V?
0
How can I safely charge a 12V deep cycle battery with a wind generator?
3
Boost converter with battery issues
0
How can I prevent a non-rechargeable backup battery from inadvertently being charged?
3
Using a boost converter as a laser driver for high power diode