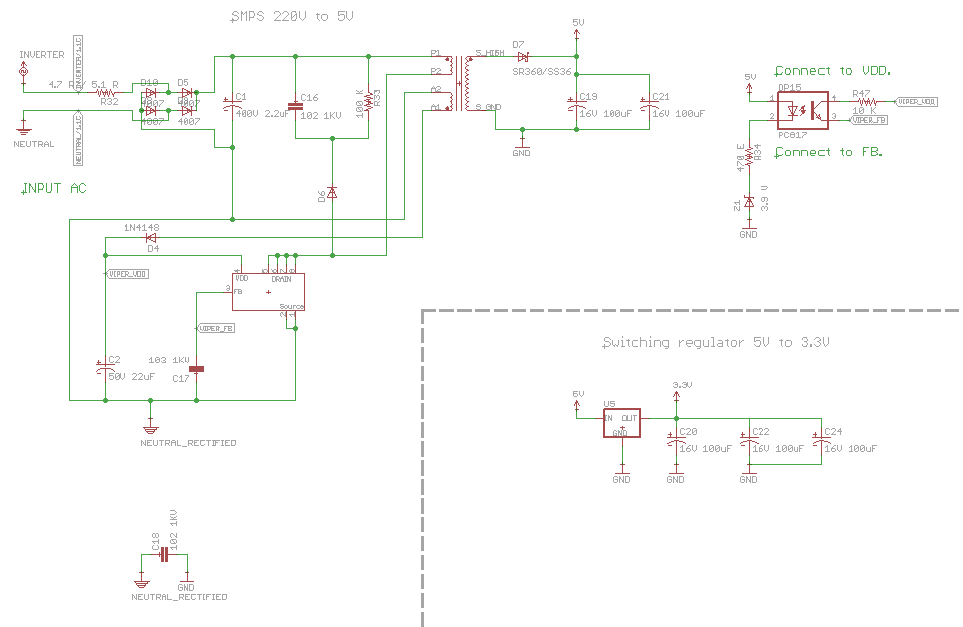 And here is the board layout: 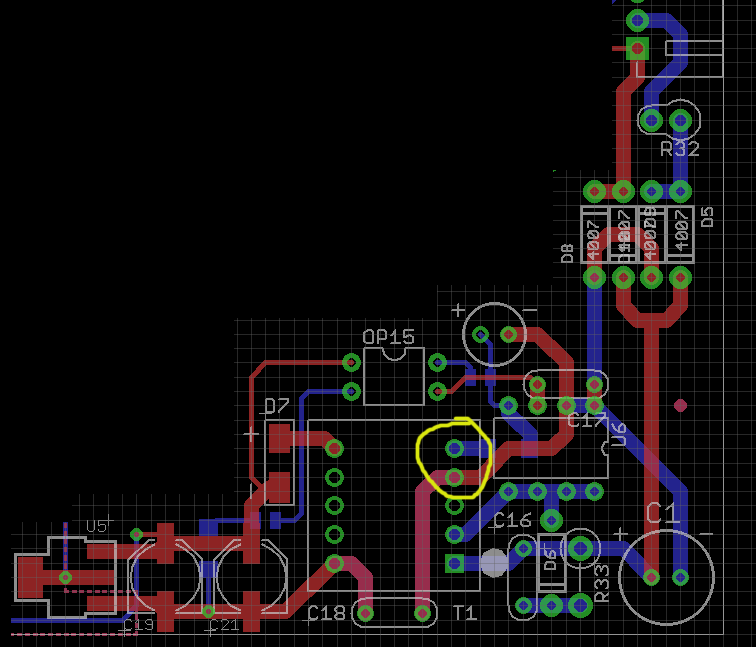 In the yellow circle region, I am seeing some sort of white deposition in a few PCBs(bottom layer). Please see the images below: 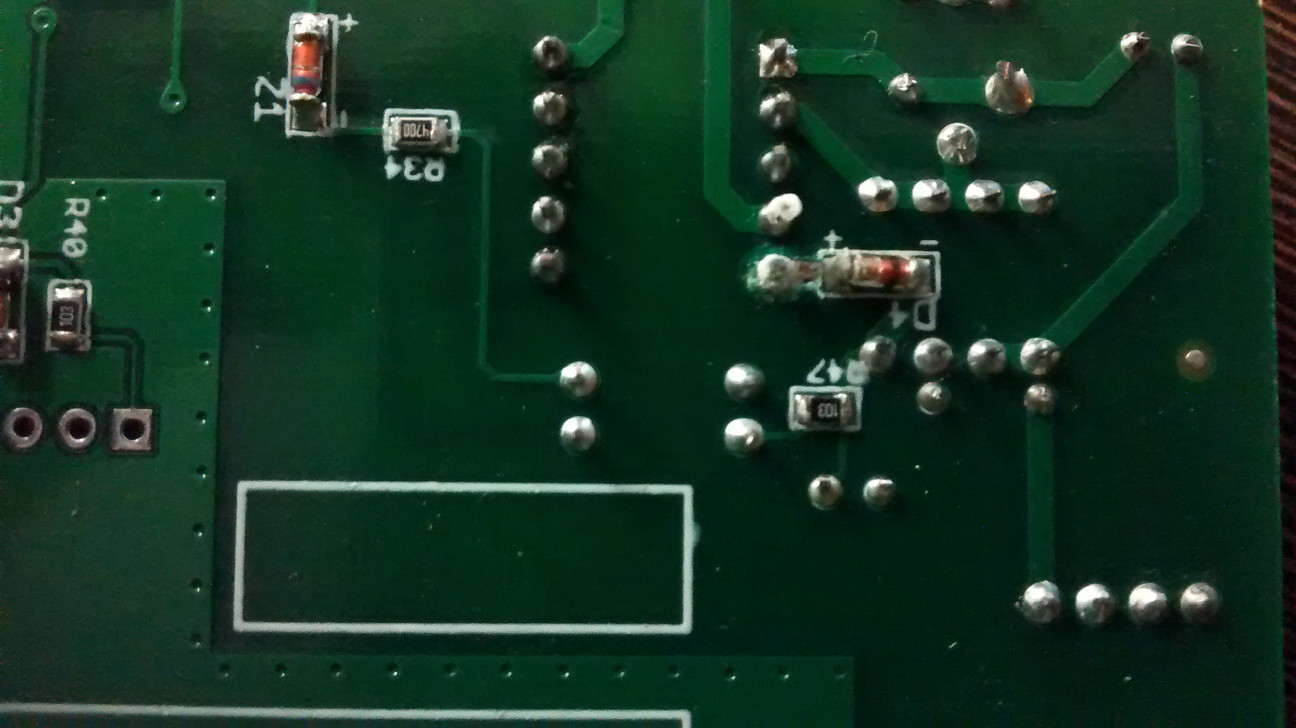 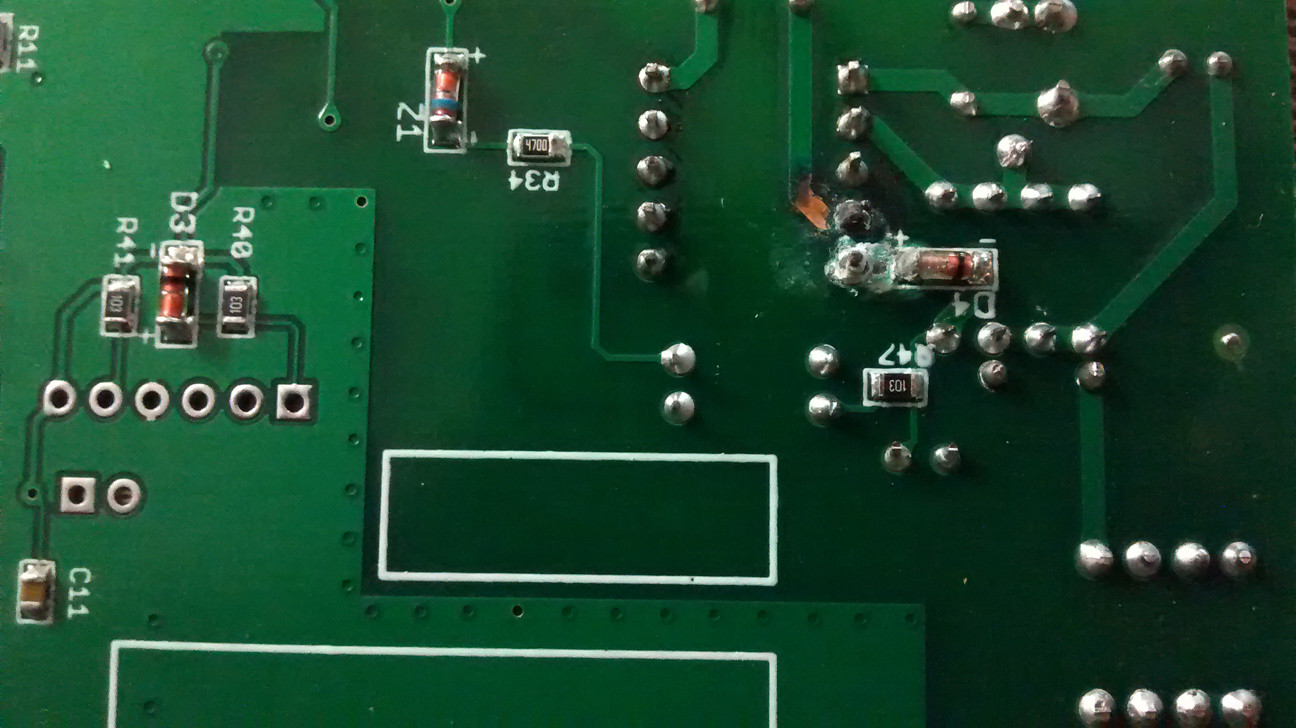 Once scraped off, it takes away the solder mask with it. Deposition starts on both auxiliary winding pins and extends to the diode (bottom layer). Remaining area seems to be unaffected. What could be the reason behind it and how do I avoid such a thing?

I think some sort of chemical reaction is going on probably due to cheap materials used during fabrication or maybe due to improper cleaning of solder flux after soldering. But again, primary winding should be having a higher voltage and hence a better spot for such chemical reactions.

I don't see a temperature rise in that area. It feels cold to the touch.

Updates: I had a feeling that this is some sort of chemical reaction. I immediately checked the place where I had placed the PCBs and I found these: 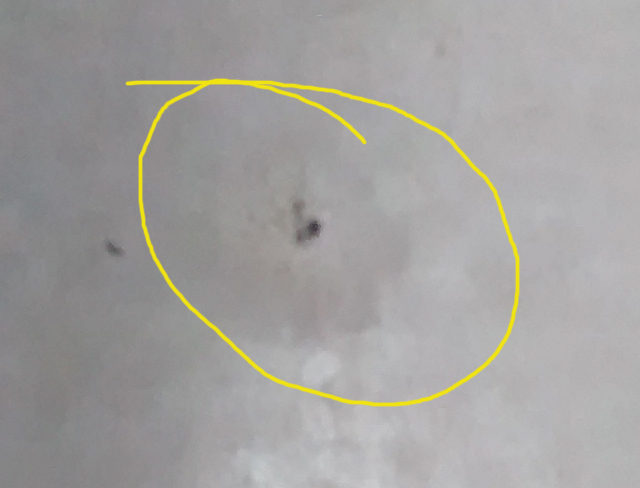 I placed the bare powered PCB on marble thinking it to be insulating. Seems like acid traces from the flux initiated ionic disintegration in the marble first and then DC current pushed the reaction even further. White deposit is deposited calcium it seems. As seen from the marble image, it seems corroded. On touch, it feels rough as if someone dropped a drop of acid on it.

Marble is metamorphic rock, structured as different grains from different rocks, with small cracks that will become filled with moisture that conductive ions (calcium is a safe bet) move into from the surrounding minerals. It may seem dry, but unless you recently baked the entire slab in an oven for a couple days or more, there is probably a good deal of moisture that has seeped in just from the ambient humidity.

Before everyone starts measuring their counter tops with an ohmmeter, resistivity is not the thing in play here. Conductive fissures between nuggets of various minerals. Minerals with dielectric coefficients. Sound like anything familiar?

An interesting property of many minerals is if subjected to a changing electric field, their dielectric constants increase quite dramatically with frequency. You need no low resistance galvanic path to conduct AC. It can pass through dielectric via the polarization and depolarization of the electric dipoles in the material. Simply put, capacitors pass AC, and the more capacitance, the more they pass. Higher dielectric constants mean more capacitance.

This is why marble is conductive to high frequency AC or any changing switching wave form. Exactly like the one that would be seen on the two pins that have the 'deposition.'

Most of the time, this doesn't really matter. And it can be very useful for measuring strain and other effects of marble, though this effect is present in other rock types as well. There is a whole field called Dielectric Spectroscopy that tries to infer various things about a chunk of material by looking at how it's AC impedance varies with frequency. Marble's only goes one way: down (with increasing frequency).

However, 300V from the recitfied 220V line switched at 60KHz is hardly a triviality. Many minerals and ceramics (MnZn ferrite is another example) start becoming more conductive with heating, often exponentially so. I've sent several amps through a ferrite core with less than 30V, you just have to get it hot enough. Well, before it shattered/semisploded. Coupled with the generally terrible thermal conductivity, I'd wager you were having some pretty serious localized heating of the marble table by those two pins.

As for the deposition, given the ions and alkaline nature of deposits in marble, there is probably some small electrochemical something or other going on. You're passing current through weird stuff and making it hot, all sorts of shenanigans could potentially be happening. But it is definitely current driven, there is no issues with flux residue or anything causing this. This is a case of putting your 300V SMPS on stuff you shouldn't, that's all.

The good news is it is specific to the board you tested, I wouldn't worry about any manufacturing issues. This was a very specific instance of 'OOPS!'.

Not the answer you're looking for? Browse other questions tagged pcb switch-mode-power-supply corrosion or ask your own question.