I have a microcontroller driving a solid-state relay to switch an LED lightbulb (the household type).

EDIT: added circuit (maybe it addresses Andy aka's comment?). PB0 is the bit 0 of output port B of the microcontroller (AVR tiny25) 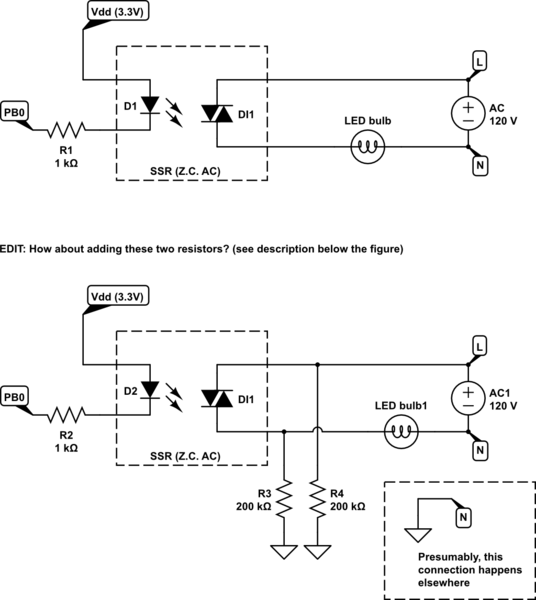 ADDITIONAL EDIT ABOUT ADDED FIGURE ABOVE:

Related to winny's comment/solution --- since I can't (in general) connect a resistor in parallel to a lightbulb (it would require hacking into the lamp or fixture), I could take advantage of the fact that GND (household GND) and N (neutral) are connected, and place those two resistors (only one is necessary, but placing two makes the contacts of the SSR output interchangeable). Does this work?

I thought zero-crossing was a good idea, so I'm using the IXYS CPC1965Y. It's not working: when I switch it on, the lightbulb gives out a flash (like a photographic camera flash) every 3 or 3.5 seconds.

It's not the circuit --- I replace the LED lightbulb with an incandescent lightbulb and it works perfectly ok. Also, a curious detail is that I first had gotten the CPC1976Y (2A, instead of 1A) and tried with that one, and it was working ok. (then, digikey ran out of stock, so I got the 1965Y assuming that functionality would be identical)

I think the notion of PF would not apply to an LED lightbulb in the strict sense, since it is non-linear; but I guess the issue for the SSR is the same.

Will I really need to switch to a non-ZC SSR? (they're more expensive, surprisingly enough :-( )

Any suggestions on how to make it work with the ZC SSR?

Snubbers are generally capacitors in series with a resistor ( which absorbes the transient energy) You could try a 240V ac X rated 0.47uF capacitor in series witha 47 ohm 1/2 watt resistor across the LED just to see if that makes a difference. Remeber PF is is defined not only a function of displacement between voltage and current ( as per an inductive or capacitive loads ) but also of harmonic origin, as per non linear devices. For the LED the distortion may occur around the zero crossing point of the AC waveform due to the LEDs V/I characteristic below a few volts - thinking maybe that is the reason for that type of zero crossing SSR not triggering reliably ? The capacitor / resistor combination will provide an element of inphase current / voltage which will help trigger the SSR reliably.

Not the answer you're looking for? Browse other questions tagged solid-state-relay or ask your own question.

7
Using the VO2223A to switch a 230Vac LED lamp
4
Driving a contactor from TTL
1
Problems getting an SSR to turn on
1
SSR fires from nearby relay
5
Would I need a zero-crossing SSR for a reflow oven controller?
2
Electronically connecting/disconnecting device from a CAN bus
0
How to protect Relay's NC contact tip from wearing out?
1
How can I replace this simple switch, with an automated alternative?