I am designing a high frequency passive RFID tag-like device that receiving 27MHz wireless power, use it to power a onboard MCU and a low power transmitter. The estimated current drain is about 50mA. You may say this is a huge amount power for a passive RFID tag, moreover, the distance between the reader and tag will be 46cm maximum. However, in our application, we will have a powerful(25W) reader for this application. My specific question here is about the power receiver. I have two available options. First one use diode and capacitor for a voltage multiplier, which is very common seen on RFID article, then follow by overvoltage protection and linear regulator, like this in following picture: 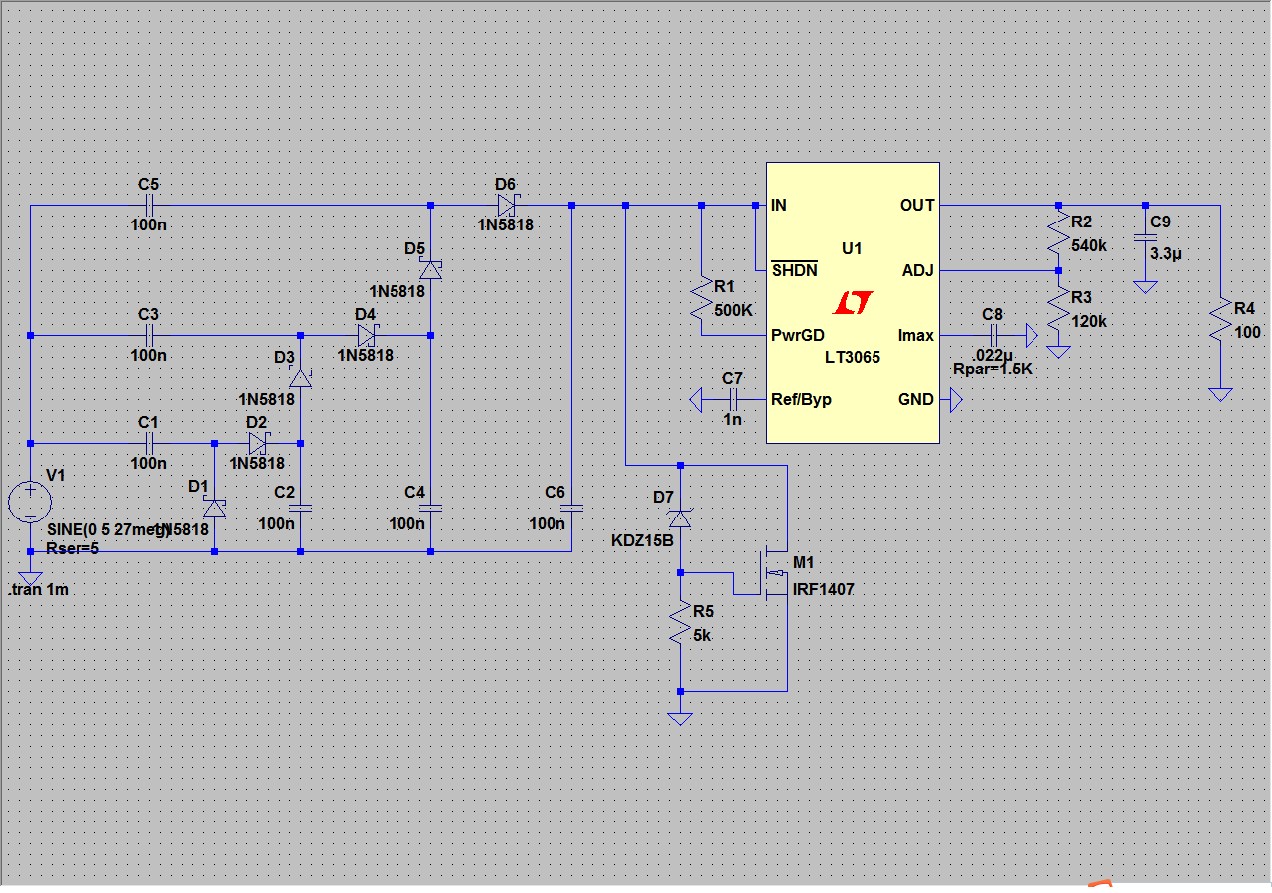 So, will this circuit work?

I found a signal generator with maximum 1W output power to simulate the transmitter. For convenience and test purpose, I used a NFC antenna transmitter coil(2.1uH at 13.56MHz) at hand with the signal frequency changed to 13.56MHz. For maximum transmitting current, I add a capacitor(actually three, according to this app note by Atmel, for better trimming) serial with the transmitter coil for serial resonance at 13.56MHz. So the transmitter circuit just looks like below. Because the signal generator's output impedance is 50Ohm, and ought to be used with 50Ohm load. 100mW output power means about 6.3V amplitude on sine wave voltage source(Am I right?). So I will get about 120mA(I actual measured about 100mA with a serial 5Ohm resistor with oscilloscope) transmit coil current for the transmitter. Is this approach for optimal(longest) operating distance right? Should I use a power amplifier whose output impedance is much smaller instead of 50Ohm for a larger transmitter coil current? 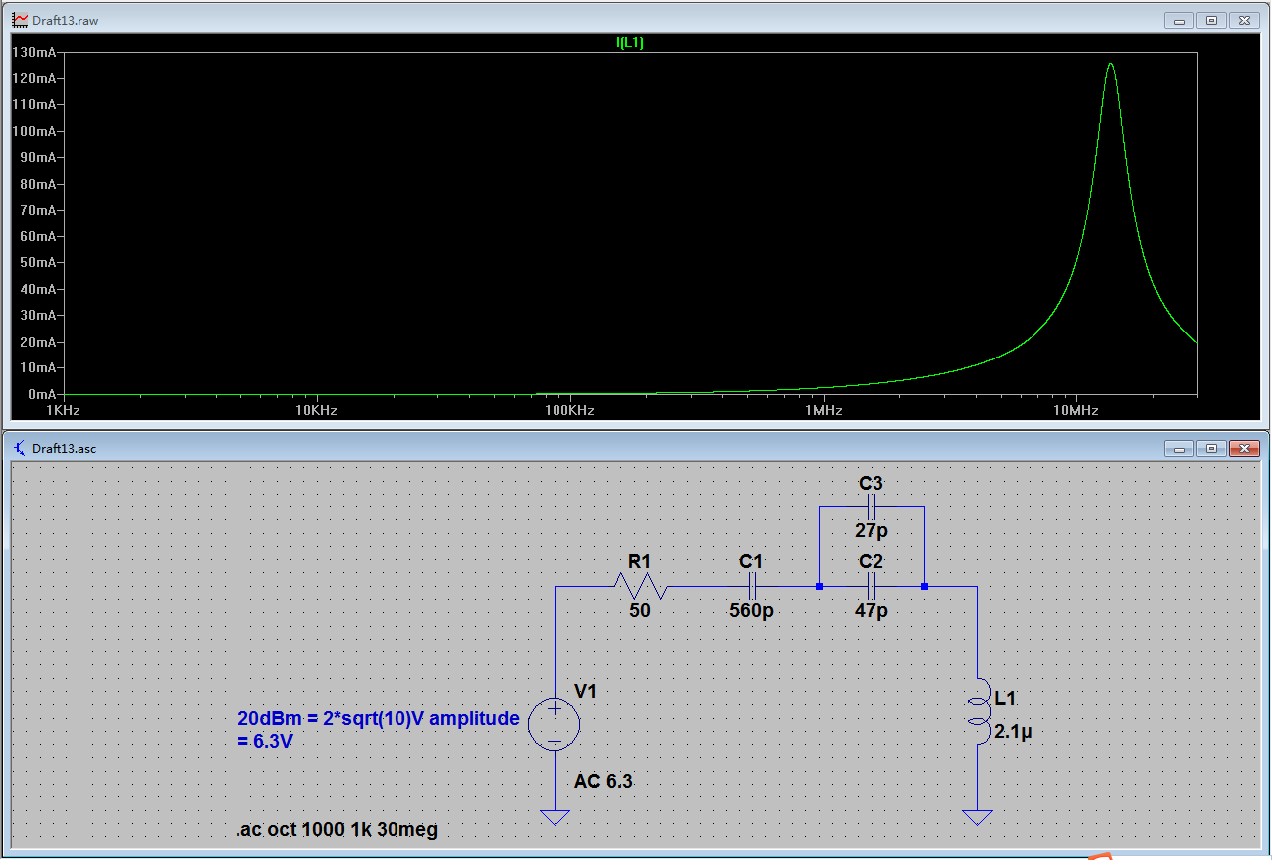 At 27 MHz, the wavelength is 11 metres so, at a read-distance of 46 cm, you are clearly in the near-field of any radiating antenna. This means that you cannot rely on the far-field advantages of H and E fields reducing linearly with distance.

Apart from that, to make a simple EM radio wave antenna needs some form of dipole and you appear to be opting for a transmit coil. At this frequency, a relatively compact transmit coil won't be able to produce a fully-fledged EM wave so, that looks like a done-deal on defining the field intensity you generate might pick up at some distance.

Here's a picture and some math taken from hyperphysics that describe this: - 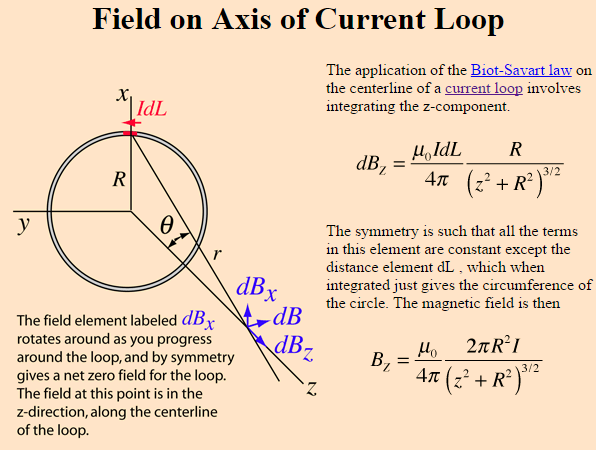 The upshot of this is that the magnetic flux density at a point along the centre-line, is inversely proportional distance cubed (when z becomes more significant than R). When R is more significant than z, the flux density falls with distance. This tends to mean that it is preferable to make the coil radius of the same order as the maximum gap distance in order not to suffer from the inverse cube law.

So how much current can you drive around your transmit coil? The lower you can make the coil inductance, the more current you can pass but, if you are dealing with a 25 watt output that is intended for a 50 ohm antenna then you will likely need to use a step down transformer.

So, on the receiver side you should aim for the same type of coil and then parallel or series tune it to liberate the required voltage you need. I don't think you will need to use caps and diodes acting as doublers.

If you go for significantly smaller coils then you will be facing difficulties that are high.

Not the answer you're looking for? Browse other questions tagged transformer wireless linear-regulator multiplier wireless-charging or ask your own question.

6
Wireless Audio Transmitter
2
Wireless communications for distance estimation (RFID perhaps?)
1
Wireless transmission power for multiple receivers
1
Why is wireless power transfer done between two coils at their self-resonant frequency?
2
Alternative wireless technology for passive RFID tags
0
Design considerations for bifilar coils for Wireless Power Transfer
0
Resonant wireless charging with really low efficiency, even when coils are in touch
0
Does wireless power have any effect on batteries without being in a circuit?