nrf51822 restarts when relay switches off

I have a micro-controller based project. I am using nrf51822 as the MCU.

there are two 12V relays in my project and they are used to switch 230V AC.

These relays are controlled by nrf51822. Currently the output is connected to the normally close pin of relay. When I switch on the relay using MCU which works fine. But when I switch off the relay the MCU will restart.

MCU says that the reason for restart is power failure.

How can I solve this issue?

this is the schematic for the setup 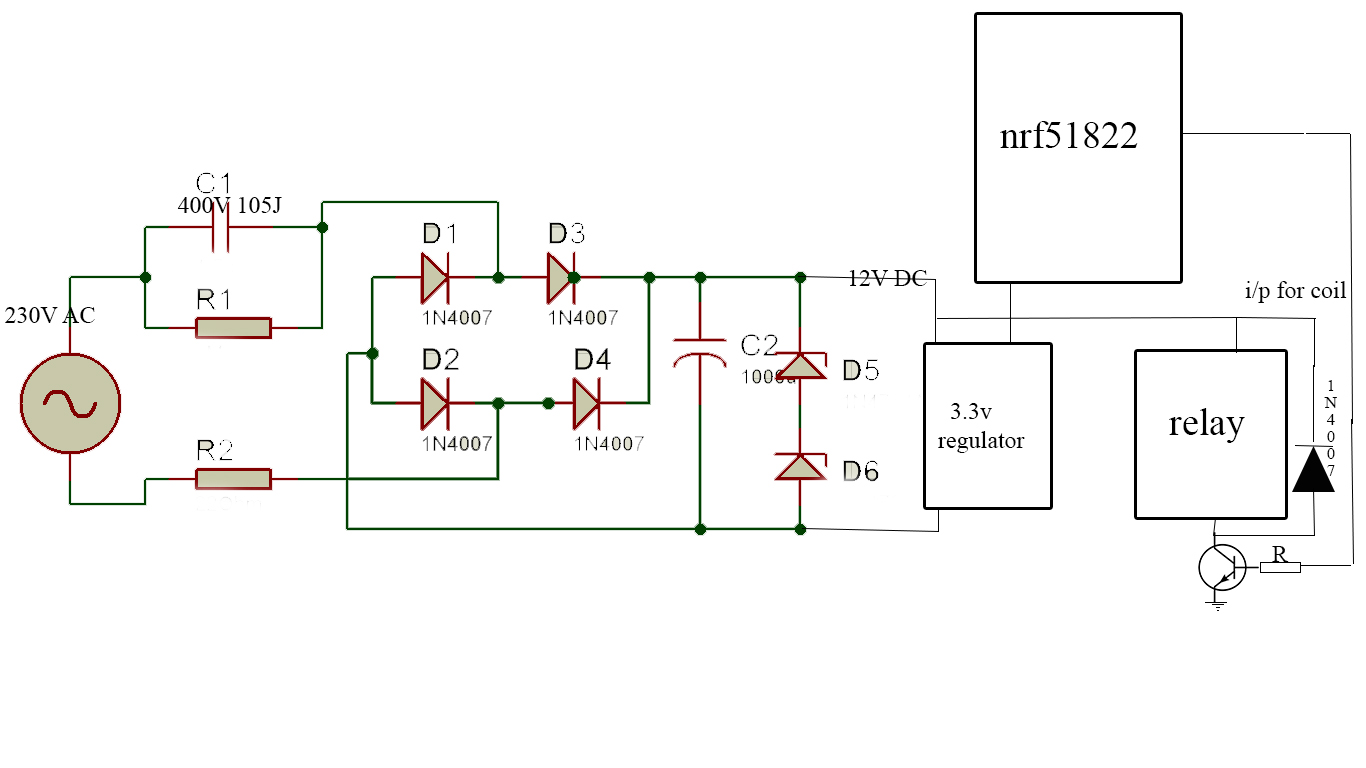 The nRF51 (and most micros for that matter) need to have decoupling on their power supply lines. You'll often find a big cap (10uF) in parallel with a much smaller cap (10nF or even smaller) to provide a reservoir or "tank" of energy. It smooths out the often heavy and fast power draws that micros are known to produce.

This question and answer can explain it far better than I can. What is a decoupling capacitor and how do I know if I need one?

Power supplies are slow...they take roughly 10 us to respond (i.e. bandwidth up to 100 kHz). So when your big, bad, multi-MHz microcontroller switches a bunch of outputs from high to low, it will draw from the power supply, causing the voltage to start drooping until it realizes (10 us later!) that it needs to do something to correct the drooping voltage.

The "speed" of capacitors varies. Basically, smaller capacitors are faster; inductance tends to be the limiting factor, which is why everyone recommends putting the caps as close as possible to VCC/GND with the shortest, widest leads that are practical. So pick the largest capacitance in the smallest package, and they will provide the most charge as fast as possible.

Firstly check the voltage of output pin in nrf51 without connecting transistor circuit if it's voltage level changing according to setting pin High & Low. If nrf51 reset then it's firmware error.

If firmware working fine then check transistor circuit. Is it properly become High & Low(if not change your transistor). Have you properly connected both GND (nrf51 & transistor).

If all good then lastly change your load.

Not the answer you're looking for? Browse other questions tagged relay nrf51822 or ask your own question.

207
What is a decoupling capacitor and how do I know if I need one?
26
AC to DC without transformer. How does this thing work?
8
PIC16F628A Resetting after relay turned off
2
Arduino crashes switching 230V relay OFF

5
Interfacing microcontroller and mains via a relay
3
Reed relay driving solenoid “sticks”
0
How to share a VCC and a GND across to multiple relays
1
Relay Feedback Problem
0
Funduino/Keyes relay board doesn't switch off relays
3
Why relay module occasionally switches by itself ON?
1
SPDT relay is not switching
0
Soft-power on/off with ATMega/Relay causes brown-outs and unexpected voltages
0
Switch “On”/“Off” RS485 data lines