I am working on designing a pcb that will have a copper pour. I have selected to use thermal reliefs to connect the pour to pads, but I am a little confused on the thickness. Should each spoke of the pour be as thick as a trace (assuming current will take a direct path, using only one spoke) or should I make it so the sum of the spokes equals the track thickness (assuming the current will only flow to max of a trace, then find another route)?

You use the term 'trace width' as if it's some sort of universal constant. It's not. Unless a trace has to be a specific width (for impedance control), it's generally as narrow as it can be limited by the necessity to carry current, not drop too much voltage, or be printable within the PCB fab tolerances that you've chosen to afford.

The requirements for the spokes of a thermal relief are different, but they too will be limited at the small feature end by the pcb fab tolerances.

Neither. You would need to be at high microwave frequencies for for 'direct path, other path' geometry to be significant. The current doesn't 'know' what the max of a trace is, it doesn't use one up to the max and then find another route.

What the current will do is use all parallel paths from pad to ground pour in the ratio of their impedances. The resistive part will tend to be more or less balanced by geometry, and at modest frequencies, say below 3GHz, the inductive difference will be negligible as well. That means that, as a first approximation, the current will split more or less equally through all spokes.

I'd grab a pad of gridded paper, and start sketching. 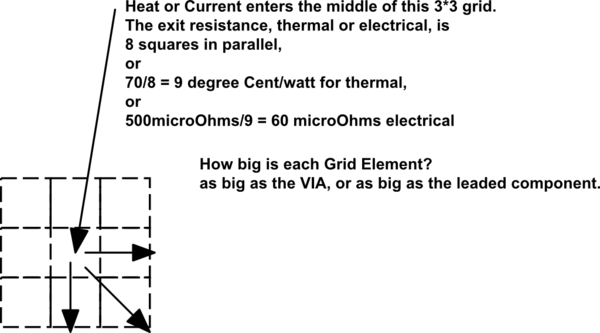 Not the answer you're looking for? Browse other questions tagged pcb-design thermal kicad copper-pour or ask your own question.

2
In Altium how do you increase the trace width from a Pour to GND Vias and Pads?
5
Proper GND pours for two-layer PCBs?
8
How to connect large traces to pads in PCB?
4
VCC pour and decoupling capacitors on a dual layer board
0
Thermal relief for thick PCB traces
1
Adding multiple thermal relief spokes to a large pad in Mentor-PADS
2
A confusion on using PCB copper pour
2
Use Thermal Relief in High Current Traces?
4
Routing thick high current traces to small SMD pads?