How Fourier transform be able to deal with transients?

Below is what Matt L.said in the thread here. Could anyone clarify how Fourier transform be able to deal with transitents? Reading that thread many times but I couldn't figure it out.

Note that it is not true that the Fourier transform cannot deal with transients. This is just a misunderstanding which probably comes from the fact that we often use the Fourier transform to analyze the steady-state behavior of systems by applying sinusoidal input signals that are defined for −∞ < t < ∞.

It's important to use the right sort of tool for the job. A hammer is defined to put in nails. If you want to turn screws, use a screwdriver.

This cyclic feature means that the FFT is a natural fit for repetitive waveforms. If the input sample contains an exact integer number of cycles, then it can be extended indefinitely by repetition, and look exactly the same as the original.

The technique of windowing a signal before FFT is used to reduce the problems that occur when it's used to transform a non-cyclic waveform. For example, take a one-second sample of a continuous 10.5Hz signal. If this sample is concatenated with itself, you get a half-cycle step, which messes with what you would hope to see doing a spectrum analysis. Note that it doesn't make the transform wrong, it just means that what you got is not what you naively hoped to get. If you hit the nail sideways, you get a bent rather than a driven nail, the hammer is still working just fine, doing exactly what it's defined to do.

The window reduces the signal amplitude at the beginning and end of the sample to zero, which means it can be cyclically extended. The window changes the signal, so the spectrum will change. However, it changes in a known and easily calculable way, which the FFT doesn't further change.

When used to transform a transient signal, we need to ensure that the signal sample starts and ends at zero. Then the sample meets the cyclic requirement, and the FFT will give you exactly what you would expect if you had a train of transient signals, repeating every sample length.

That's what the FFT does. If you don't want the transform of a train of signals, then the FFT is not the hammer to use. You still have a lot of freedom to adjust this train of signals to your taste, just as you can choose what window to use when transforming a continuous signal. You can make the impulses repeat less often by increasing the time length of the sample for instance.

I'm not trying to get to the bottom of the linked question, I'm just trying to justify why Fourier analysis of a transient is perfectly feasible.

Given that a transient is temporal limited, i.e. it is a transient and it doesn't last very long, it's feasible to limit the time range for the analysis. On this basis, it seems reasonable to analyse it if it were a continual and repeating waveform. So the transient begins at (say) time zero and is all-done at (say) 1 second. Is there anything unreasonable to assume that it starts again at t=1 second?

Therefore it can be analysed by normal Fourier analysis.

Here is Signal Wave Explorer, using FFT, to model 3 pulses thru a LPF. On right side of the plots is a dotted vertical line, the Nyquist frequency. In the Mag/Phase that is the mirroring frequency, indeed shown here.

[ We are interested in very accurate modeling of the SETTLING of opamp responses, to the 16 and 20 and 24 bit levels. Thus far, in SWE, with 512,000 samples, we easily reach the 20 bit level. With larger memory allocation, we expect to reach 24+ bits. The built-in example "JB stage", shown at end of this answer, illustrates typical problems of settling. ]

Thus we have used the FFT to fully capture the transient behavior. 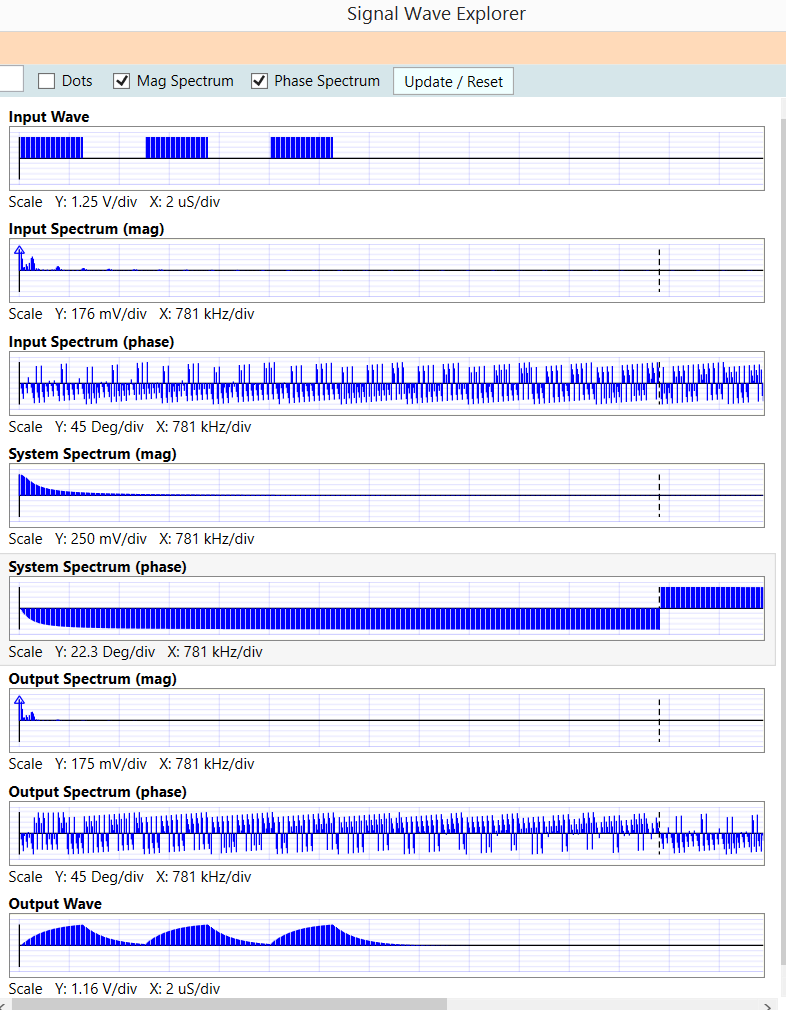 And now without the Phase plots. In the InputSpectrum, you see the sin(x)/x components of the squarewave, with amplitudes decaying as 1/Harmonic#. The tool --SWE--- simply multiplies this InputSpectrum with the SystemSpectrum, producing the OutputSpectrum; magnitudes are multiplied; phases are added. Then OutputSpectrum undergoes InverseFFT, to produce the OutputWave. 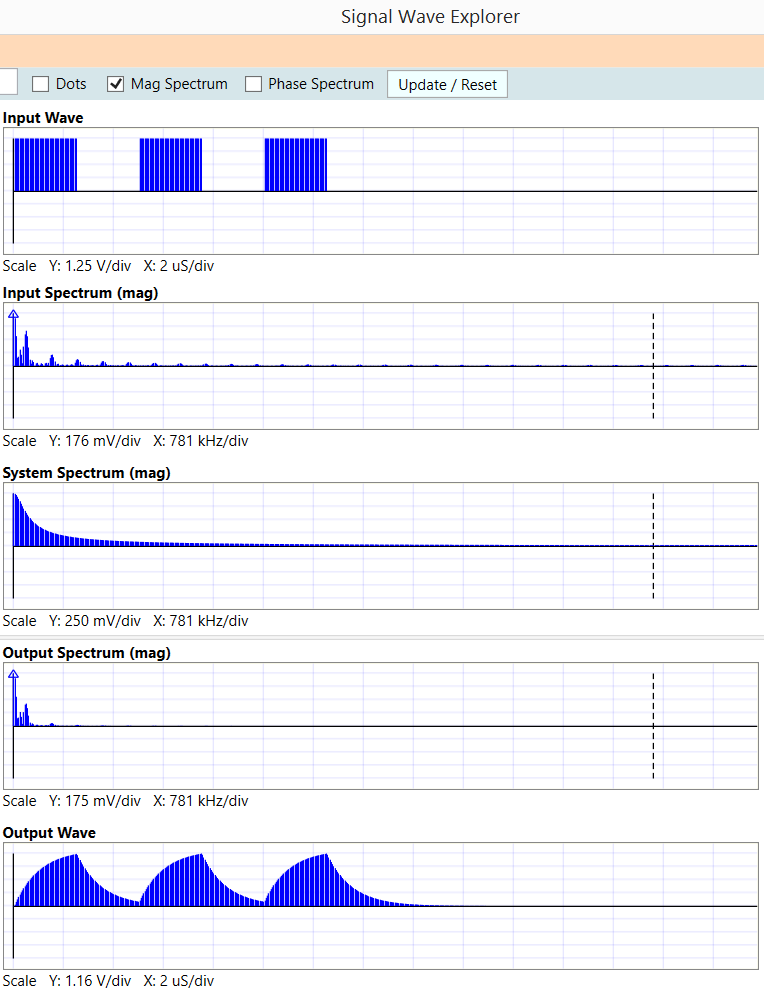 Here is the JB_stage example. 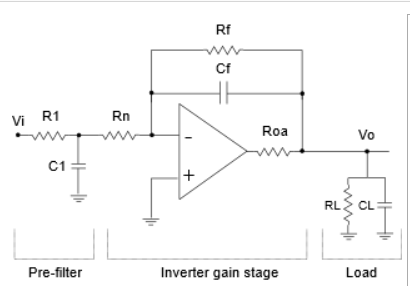 Here is output waveform of JB_stage, with NO input filtering (C1 is not active); notice the initial pulse is NONINVERTING. The input edge blasts right through the feedback capacitor.

Not the answer you're looking for? Browse other questions tagged circuit-analysis circuit-design fourier laplace-transform transient or ask your own question.

8
Fourier vs. Laplace
0
How to deal with low pass filter questions if Fourier transform of signal does not exist?