I'm having issues with deployed knob pots after they've been in use for a while. It's been an ongoing problem that we don't see at our local facility. I'm wondering if any of you may have experienced this problem, and more importantly, are aware of a solution.

Durability. Common occurrence of glitchy output after some time (months/years) in use.

A picture showing traces from both a good (blue) and bad (black) pots, turned by hand: 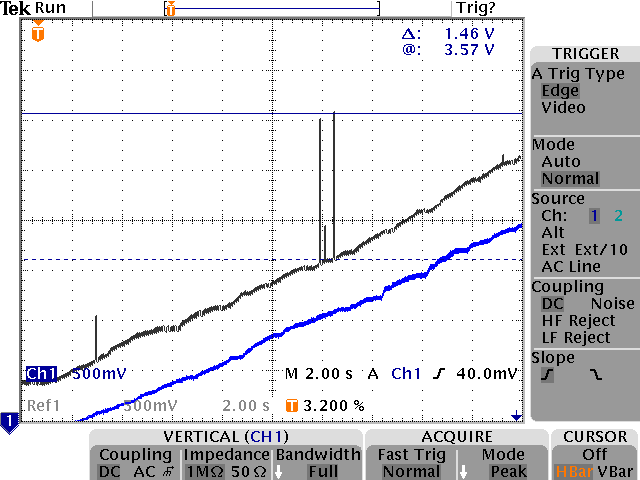 Here is a copy of the driver and buffer circuits for the 20k pot:

The problem pot is the "Panel_Cmd_Knob_Pot" connected to the top 3 yellow ports. 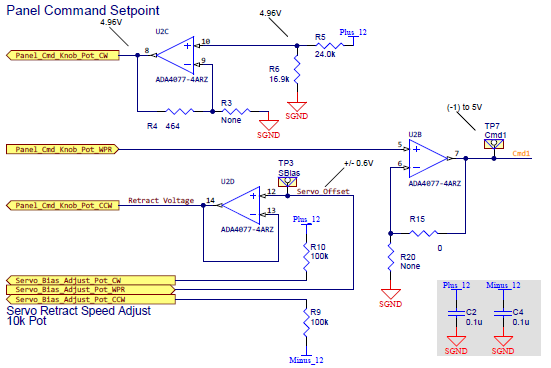 (Not shown above is U2A. This section is used as another low-speed buffer elsewhere.)

All connections are 'permanent' (no hot-plugging).

What I plan on trying next:

Add a series resistor from the knob pot wiper to the U2B buffer input. Perhaps current-limiting power-up transients, that may or may not exist.

switch to a conductive plastic element or even a try the sealed bushing of the same pot. The problem is that it could have develop wear spots from the mechanical wiper, or crud/dust has got inside it. I'd probably try the 3590S-4-203L, if that didn't do the trick, then maybe just a seal shaft conductive plastic pot if it doesn't really need 10 turns.

If this design didn't have current flowing through the wiper you would have never knew of the developing wiper noise.

Adding a heavy duty RC filter (1 M * 100nF) will help reduce noise while pot is moving, but a bad spot is always going to be a bad spot.

I ran into the same problem with variacs under daily use. At some point the element had no conduction at the bad spot, but micro-arcing of current from using the same spots over and over again was the culprit, so every two years I had to replace them.

I did not have this problem with the pots you use. A 10K resistor in series with the wiper would reduce any shoot-through currents when the pot is at extremes of range, and maybe the op-amp conducts or clamps voltage close to their supply rails.

I did switch to 1K pots to reduce sensitivity to noise, but I never had one with bad spots even after ten years of heavy use, but I used conductive plastic potentiometers, not wire-wound.

You must draw some current from the wiper for it to be self-cleaning just like with switches. 1mA should be enough. If it's gold-plated, maybe 50uA is enough.

I've seen this type of failure before with potentiometers, where the track exhibits strange properties during the turn. Long story short, the tracks were disintegrating/failing due to vibration from the vehicle. We ended up switching to RVDTs.

(Wanted to COMMENT, but don't have enough points, so ANSWERing instead.)

Just a SWAG on my part, but could galvanic corrosion be the cause or a contributing factor? I remember being a new engineer working on phone systems and learning that the system voltage is ground and -48VDC, rather than ground and +48VDC, to counter this effect.

Referring to the schematic, the pot's wiper goes only to the non-inverting input of U2B, so the input bias current will flow though the wiper. The bias current spec is less than +/-1 nA (+/-1.5 nA over temp), so not a bunch, but still something. Maybe with the right set of conditions -- input bias current polarity and magnitude, shaft inactivity, humidity, temperature, (Elvis sightings??) -- a problem will occur. A clue would be if the bad spots are present only where the wiper has been parked for a while. If this does turn out to be an issue, one solution would be putting a resistor from the wiper to the appropriate end of the pot: the high end to source current into the wiper, or the low end to sink current out of the wiper. A large value resistor (e.g., 1 Meg) would probably do the trick and not affect the range of the pot.

Like I mentioned, it's just a SWAG, but wanted to pass it along. Maybe the engineer at Bourns could review (if he gets back), or maybe some folks on SE who are more familiar with the topic could comment.

Hope you get to the bottom of this and get it resolved!

1
Problem Controlling Digital Potentiometer with Micro
8
What's the difference between linear and audio tapers, and why should I care?
2
Potentiometer Puzzle - TIG Pedal
0
Pot and Knob shafts, Ds and Flats
1
Explanation for super-sensitive loose contact inside potentiometer?
0
No output voltage on wiper when using pot as voltage divider
1
Standard for CW, CCW on pot schematic?
1
Hole for the disc type knob potentiometer
1
Reading potentiometer with external ADC