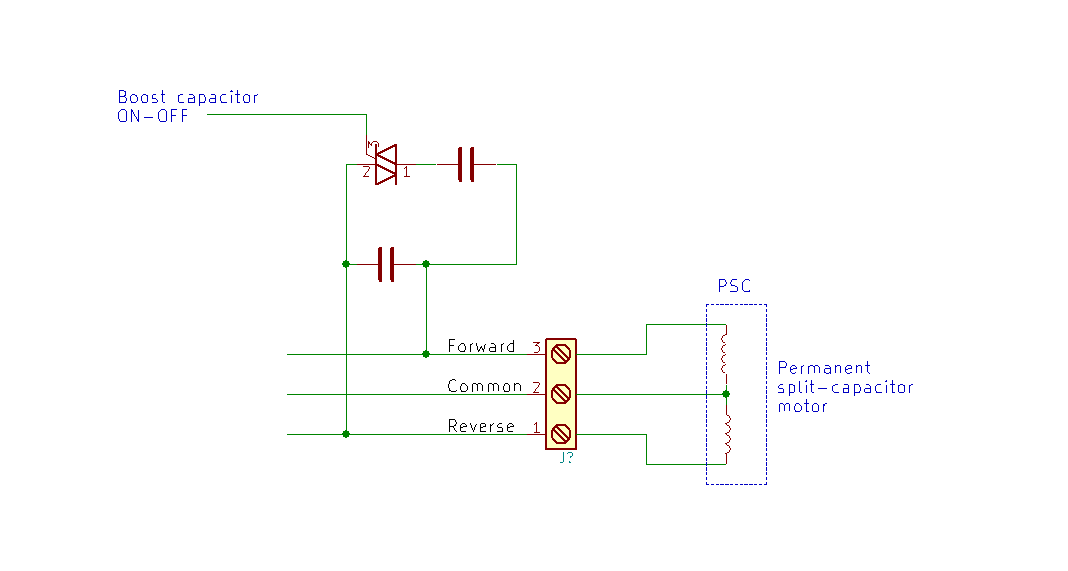 In the image above, we see a PSC motor, with its 3 terminals, connected to a control board. This board has a RUN capacitor always connected to the motor. When the motor has to turn, the board applies 230V AC between the COMMON line and either the FORWARD or REVERSE line. The relevant winding is powered directly, and the other winding gets powered via the RUN capacitor, with about 90 degrees delay. This makes the motor run in one of the two direction.

I would like to use a TRIAC instead of a relay. Can anyone point me to choose the correct device, and give any warning I may need? I've already tried, but the TRIAC fails in short-circuit without heating or other signs (the real schematic is not simple as the one above, but the concept is exactly that).

The motor is about 1kW, @230V; the capacitors should be about 25 uF each. The current is about 1A continuous but it can rise to 4A when the motor starts or when the load gets heavy (I'm using a workbench brake for testing). 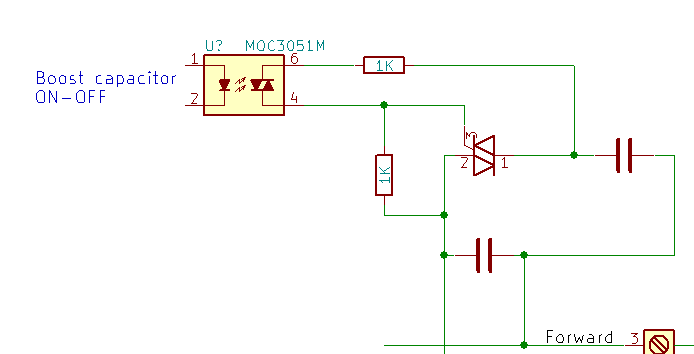 Basically, the 2nd capacitor has a series triac; the triac is gated by a MOC, taking current from A2 (MT2); the resistor from gate to A1 (MT1) is optional.

The Triac goes short-circuit, but the MOC keeps to work. The capacitors, which are normally used and considered reliable, are rated 470V. My triac is an ST, snubberless, rated 1200V and 16A (continuous). There is something I don't grasp...

Because you appear to have a random phase turn-on you have no control of the point of turn on. This can result in very high circulating currents between the two capacitors in the circuit you show.

You need to put a zero crossing detector across the permanently in place capacitor and use this signal to tell you when you can turn on the TRIAC. If you turn on the TRIAC when the voltage is low, then there will be no (or at least very low) circulating currents.

I suspect that snubberless means that the traic does not need dv/dt snubber but still may need di/dt protection. Switching capacitors will result in high di/dt. That is probably the mode of failure. You will need to add di/dt protection to the circuit or use a relay. A higher current triac might work without di/dt protection.

Why are you attempting to re-invent this circuit? What problem are you trying to solve? How are you planning on deciding WHEN to disconnect the capacitor?

From the standpoint of the triac/SCR, the charging current of the capacitor looks like a short circuit and the resultant dI/dt can damage the thyristor, then when you turn off the triac/SCR, the inductive kickback from the motor winding can cause a dV/dt issue. Preventing all of that is going to cost more than the potential benefits of changing to a triac/SCR, which is why you do not see this concept used by motor mfrs.

FYI, GE developed this concept a long time ago and abandoned it as being actually LESS reliable than the electro-mechanical method. 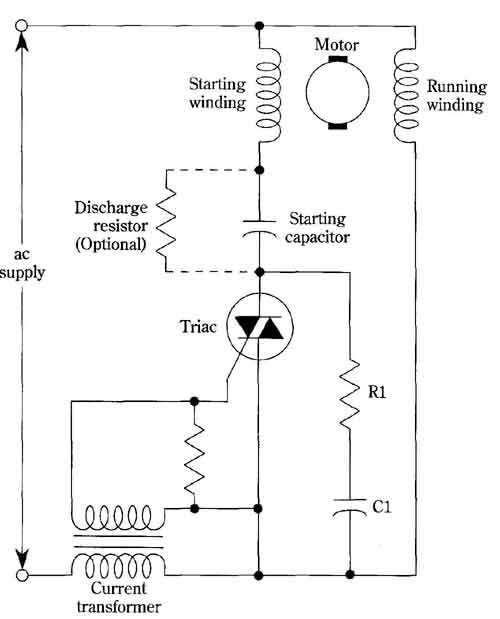 Not the answer you're looking for? Browse other questions tagged motor triac induction-motor or ask your own question.