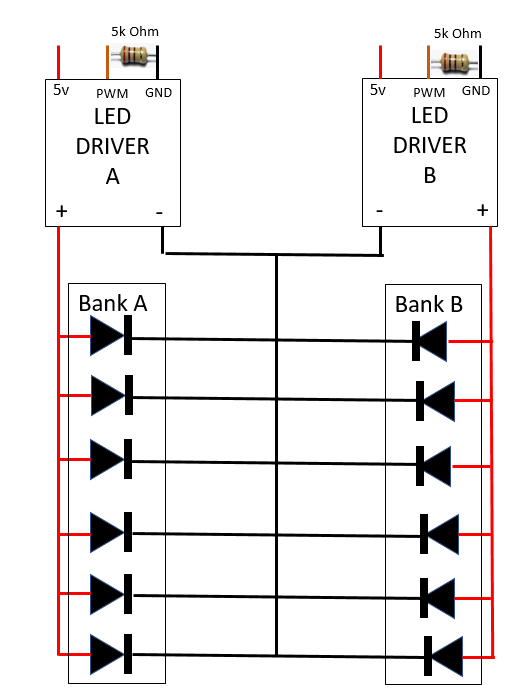 I am having an issue with the above circuit when LED DRIVER B has 0 PWM and LED driver A is being driven by a signal driver B is supposed to be off but the leds from BANK B are still lit dim. I checked with a scope and have 0 PWM on LED DRIVER B. One LED from BANK A is enclosed with one LED from BANK B. Bank A is white LEDs and BANK B is Green LEDs. The same issue happens in reverse. When LED driver B has a PWM and LED driver A does not, all LEDs are on. I was not involved with the design and need to find a way to fix this. The LED's are very difficult to get to and it is a last resort to modify the boards they are on by separating the grounds. The banks are never supposed to be on at the same time. When one turns off the other turns on and both are supposed to dim up or down at the same time. The drivers for this circuit are LDD-1500L https://www.meanwell.com/Upload/PDF/LDD-L/LDD-L-SPEC.PDF. I am hoping someone can provide a solution to this without modifying the boards they are on.

We did try adding a diode at the - outputs of the driver to block any possible feedback into the driver but this did not work.

EDIT
This answer is based on the (wrong) assumption that neither the leds (PCB) nor the LED drivers, nor the connection between both should be changed/replaced.

Since the input current is not that much (less than 1.5A), you could try disabling the power supply of LED driver A (interrupt 5V as well as GND) when LED driver B is controlled and vice versa.
It is an ugly solution, but it might work.
If you need to switch quickly between drivers, you can replace the relays with (high and low side) mosfets. Or replace it with a motor driver with rectification. 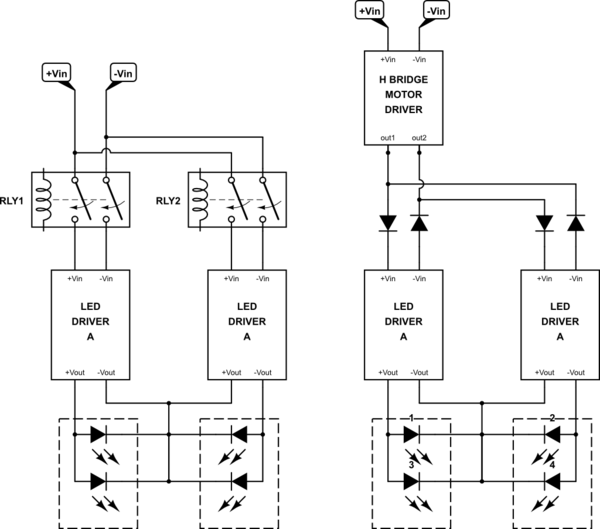 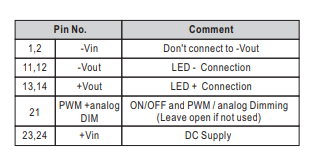 Figure 1. The pinout for pins 1 and 2 suggests that there are some internal constraints and that there is switching between -Vout and -Vin.

... it is a last resort to modify the boards they are on by separating the grounds.

If the LEDs are common cathode then switching the grounds won't work.

There's a conflict in what you are describing here. If they both dim up and down at the same time then there must, at least, be some overlap when they are both on. 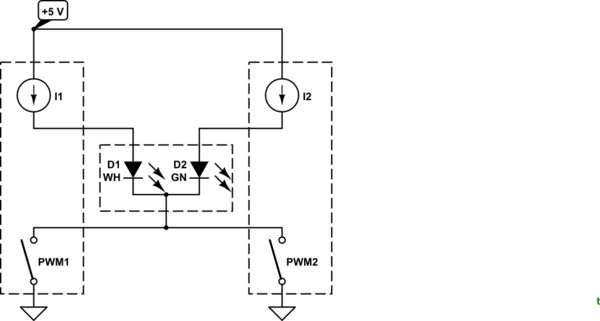 Figure 2. Equivalent circuit. The PWM switches are most likely to be in the LED negative leg.

I think you can't fix this with those power supplies.

Not the answer you're looking for? Browse other questions tagged led circuit-analysis circuit-design led-driver or ask your own question.