I am trying to switch a roller shutter belt winder (RADEMACHER RolloTron Basic 1100) with an AI-Thinker ESP8266 ESP-12E module. As software ESPhome is used.

Most of the time the ESP8266 loses its wifi connection on triggering the open or close function. Often it does only one action. Sometimes I can open or close 2 - 3 times before the wifi is gone.

I already tried a lot of things and now I am running out of ideas:

I did tests with another battery powered ESP-12E that has no connection to the shutter winder. The wifi issues are starting at distances around 5 cm (1.95 inches). 10 centimeters away the second esp is working just fine. Also i noticed resets around every 10th time a shutter button is pressed (the ESPs led was blinking once)

Furthermore i tested the other way round with the original setup: If the opto-isolator are disconnected and the wires are just connected to two leds there are no issues - even that close to the shutter winder. The leds can be switched over wifi without resets or wifi issues.

So it seems to have to do with interference (probably caused by the big relays inside the device or by the motor). But how can such a problem be solved without moving the esp outside of the case? The rollotron and the ESP are already connected to a shared ground.

Today i wrapped the ESP8266 in isolated but grounded aluminum foil and only left the antenna sticking out on the bottom. That did not make things better but i had the feeling that things improve very much if i have my finger on top of the foil.

Here is the module: 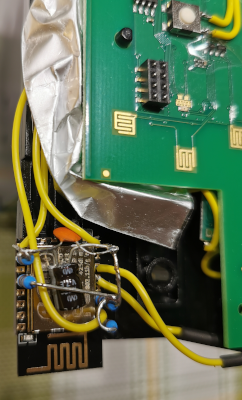 Does anyone have further ideas how to solve or troubleshoot this issue? 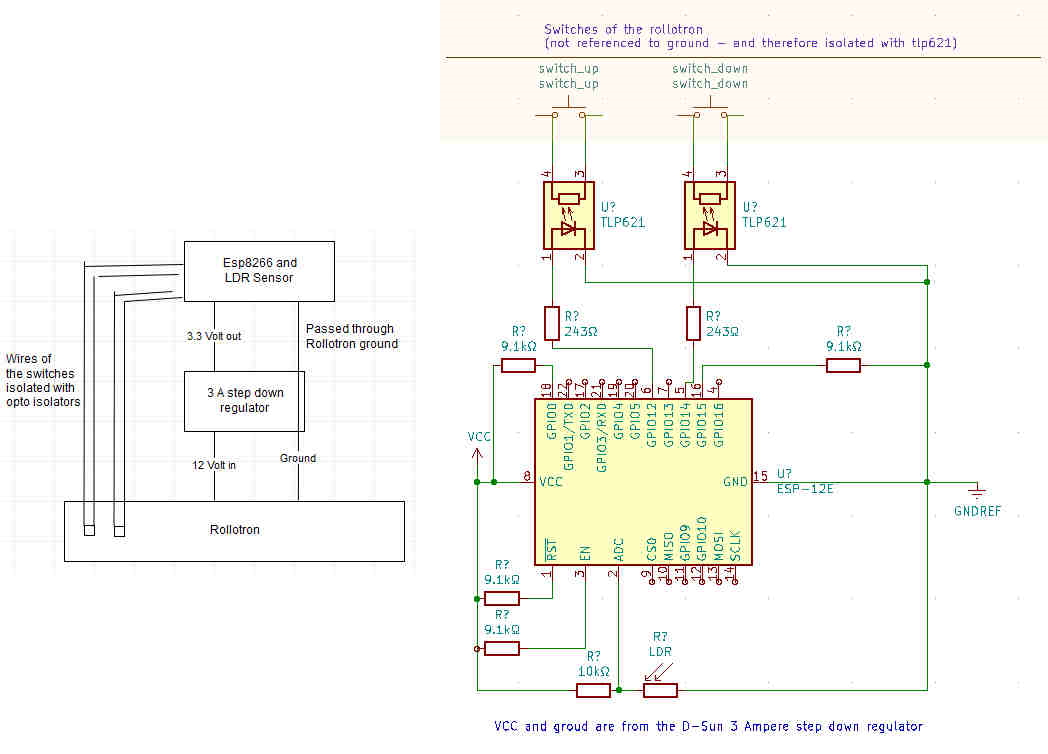 I solved the problem by rewiring. Everything is still wired according to the diagram above but with the following changes:

What i don't know is, which measure was the important one.

Tip: Don't waste your time with grounded shielding. It is not worth it.
I stumbled across another topic: If you create a DIY project with a motor ensure that you have a capacitor across the terminals of the motor. You can also add capacitors from both terminals to the case to reduce noise. (The rollotron uses such a technique already)

Here is a picture after rewiring:

Not the answer you're looking for? Browse other questions tagged microcontroller opto-isolator esp8266 troubleshooting or ask your own question.