I want to test a system described in an old (~1990) french patent and experiment with it if it works. The system requires to generate an "intense" varying magnetic field in the audio frequency range (<20kHz). The inventor used special signals, but I plan to use only a sin wave.

To produce the "intense" varying magnetic field, the inventor used a conventional 60W RMS audio amplifier and a simple 4 Ohms coil. The coil was described to be made of 300 turns of a 0.5mm wire, a height of 80mm and an internal diameter of 50mm. The inventor specified that he see 10Vefficient ("tension efficace") at the coil terminations. I'm not sure what it exactly means. Is it 14.1Vtt, 28.2 Vtt ? What power could that be ? Is it roughly 10*10/4 = 25W ?

A friend feared that the 0.5mm wire might be too thin and that the coil might heat up. Is this true ? I assumed that this should not be a problem if the inventor had no problem, but I'm not 100% sure that the system described by the inventor is valid.

I then made my own coil using 0.5mm wire. I used this service to determine the number of turns required to get a 4 Ohms coil with a height of 25mm and internal diameter of 16mm. This is what I got. 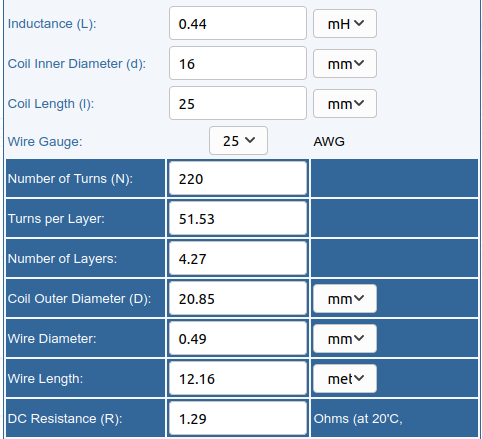 I then tried to measure the inductance and ESR with the method described here that uses a triangular signal. According to the method I should see this 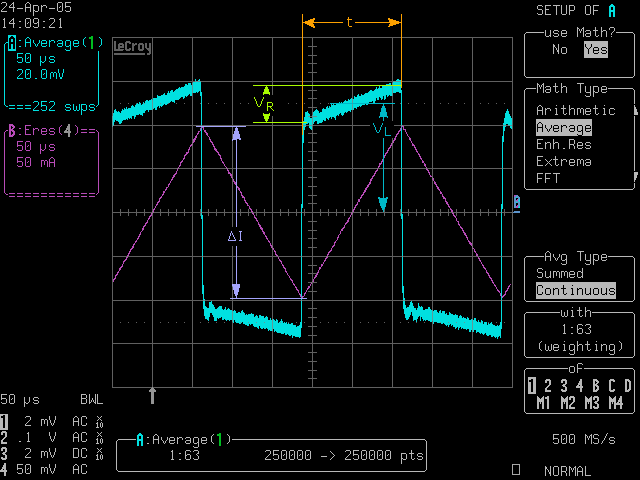 I already tried this method with a small coil I made but with much less turns. I did indeed see the expected image. I noticed that I started to see an distortion (overdrive?) at a voltage around 2V if I remember well. Is this distortion due to the interaction of the coil with the generator or is it only a property of the coil ?

Now trying the method with my newly made coil of 220 turns, what I see is this 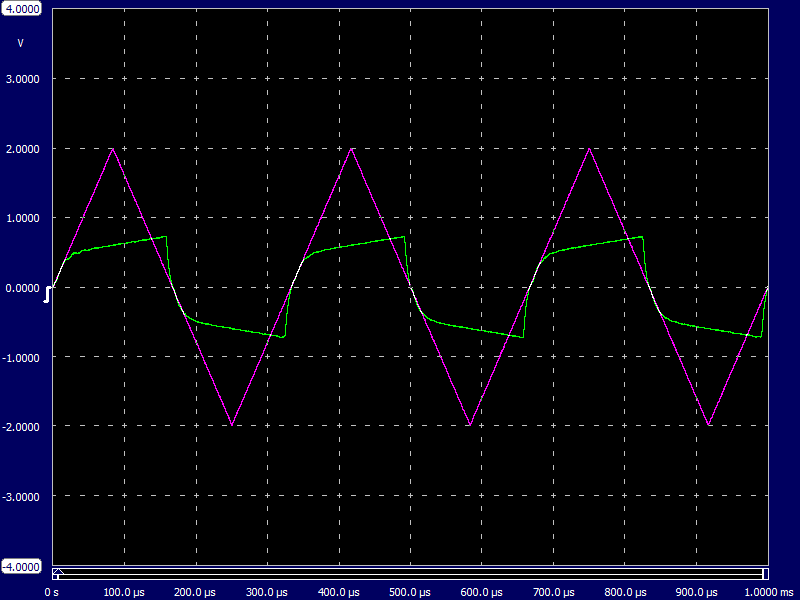 It doesn't match at all the expected look. It seem that the signal is shifted. I'm no electronic engineer, but I suspect that it could be due to a non-negligible capacitance. Also, above 4V the signal becomes distorted. I didn't try with the 160W amp yet. I don't want to break anything.

Do I see this because I made a compact coil instead of a big and stretched coil as did the inventor ? 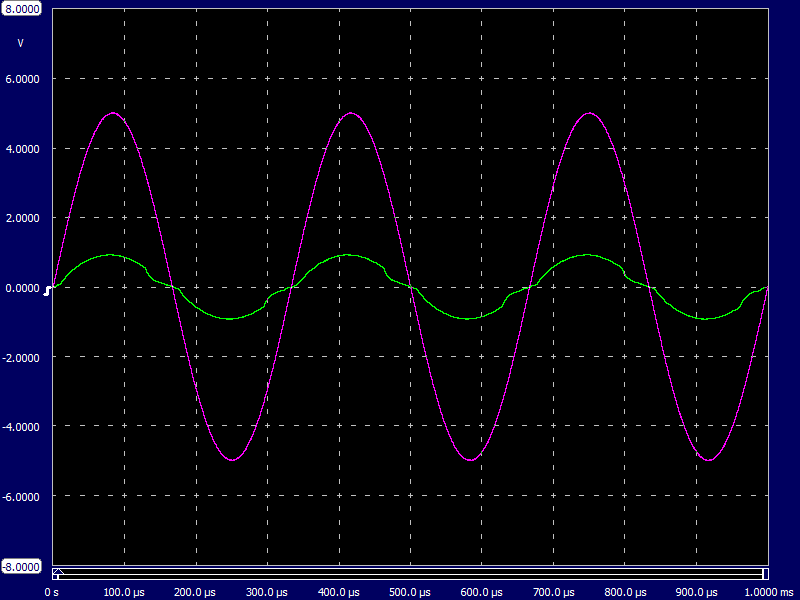 The sin wave is distorted and significantly attenuated.

These results are unexpected for me since coils of speakers are usually compact and not stretched. I assumed that the coil of the inventor is stretched because he puts big thing in the core. Could it be to reduce inductance ? I need only to put small liquid containers (Eppendorf) in the core.

Will I see such distortion too if I connect the coil as is to the audio amplifier ? Before testing this I prefer to ask the experts if what I do is OK.

What should/could I do to produce a powerful not distorted sinusoidal signal ?

Last question is how to determine the approximate output power of the audio amplifier if all I have is an oscilloscope. I don't have a good ampere meter.

Edit: I now remember that the support service of the oscilloscope told me that a coil connected to the output of the generator should have an impedance of 50 Ohms, otherwise the signal would be attenuated. What I see could thus be normal and result from the interaction with the generator.

Edit 2: I finally manage to measure the inductance using the method described here. The inductance measured with this method is 0.5 mH which is not that far from the 0.44 I was expecting. I need a good multimeter. I could then measure DC resistance of the coil to determine impedance. I'll need it also to measure current to determine the input power of the coil. Next tool to buy.

Edit 3: I tested the coil by connecting it to the audio amplifier output. I checked the voltage with the oscilloscope. The voltage is <200mV and every 5 to 10s I see an 8V short peak. The coil becomes hot. I checked that the amp is OK by connecting a speaker. It works witch also proves that the generator connected to the input line works as expected. It's just the coil which is bogus. Speaker coils have a magnet as core and when current flows through the coil a force is produced that I assume generates a resistance to the current flow. My coil doesn't have that. The inventor's coil doesn't have it too, so I assumed it was OK. The geometry of my coil and the coil of the inventor are different. Could this be the explanation ? It seam that my coil has a non negligible capacitance because of the compactness of the wiring. Is this the problem ?

What you have to keep in mind is that the impedance of a coil varies strongly with the frequency.

You measured the inductance of the coil to be 440 microhenries.

You mentioned in another post that you are using an SMSL SA 98E amplifier. It uses a TDA7498E amplifier IC.

That amplifier uses a class D bridge output. Clipping the ground wire of the scope to one of the output wires may cause a short in one side of the bridge. That would cause your coil to be exposed to DC - and your coil is basically a short circuit at DC.

A large capacitor in series with the coil would help in that case.

The best thing to do would be to try it without connecting the scope for now. If the coil stays cool when the scope is disconnected, then there's ways to make the measurements.

If the coil alone still gets hot, you might put a large capacitor in series with the coil. I'd try about 50 microfarads. That'll give you about 3 ohms impedance at 1000 Hz added to the impedance of the coil. That should prevent overheating in the coil from any DC that may be present.

You've confirmed it was a problem with the oscilloscope.

Connect a 100 nanofarad capacitor to the probe and another to the ground lead of the probe (that's two capacitors.)

Connect the free ends of the capacitors to the coil.

Your scope should show the driving signal with the correct shape and voltage.

For a start, you can estimate the power from the voltage and the impedance of the coil.

You measured inductance of the coil and got 440 microhenries. Use that and the driving frequency to calculate the impedance (\$Z = 2 \pi fL\$ where Z is in ohms, f is in hertz, and L is in henries.)

Measure the voltage with the scope. Calculate RMS voltage from the peak to peak voltage, or use the RMS function if your scope has it.

That won't be perfectly accurate, but it'll give you numbers that are at least somewhat realistic.

That'll be a bit inconvenient because of the math - if you change the frequency you have to start all over again with calculating the impedance and then the power.

with a core and multi layer, it prob won't be ideal inductor. don't know if that matters for you, but here's a possible impedance measurement setup without anything fancy 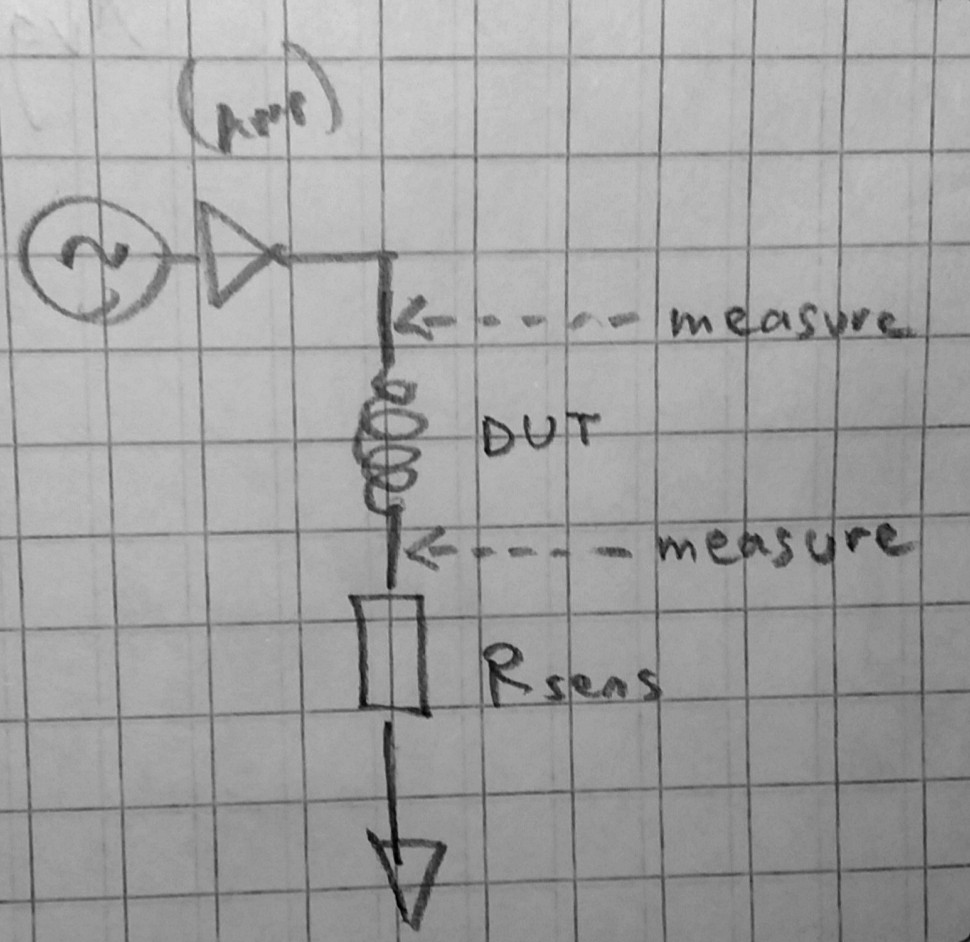 use low ish amplitude sine signal, that way actual output of amp is not so important since you measure it anyway. test frequencies at 10,100,1k,10k etc. fill in if curious. pay attention to phase. try different DC offsets, and think of them in terms of current. try different amplitude too.

PS - in addition to impedance, to get a good mental model of the coil/core, look up the B-H behavior, hysteresis, saturation. if you're winding your own, I think a sense winding would be helpful for that, this measurement is not a great way to get insight into that in my limited knowledge. If you're curious they have cheap magnetic flux sensors.

PPS - original question was about audio amplifier. it might do bad things with improper load on the output, or too much DC on input, suggest to double check

The impedance of your coil is too high for 20kHz. 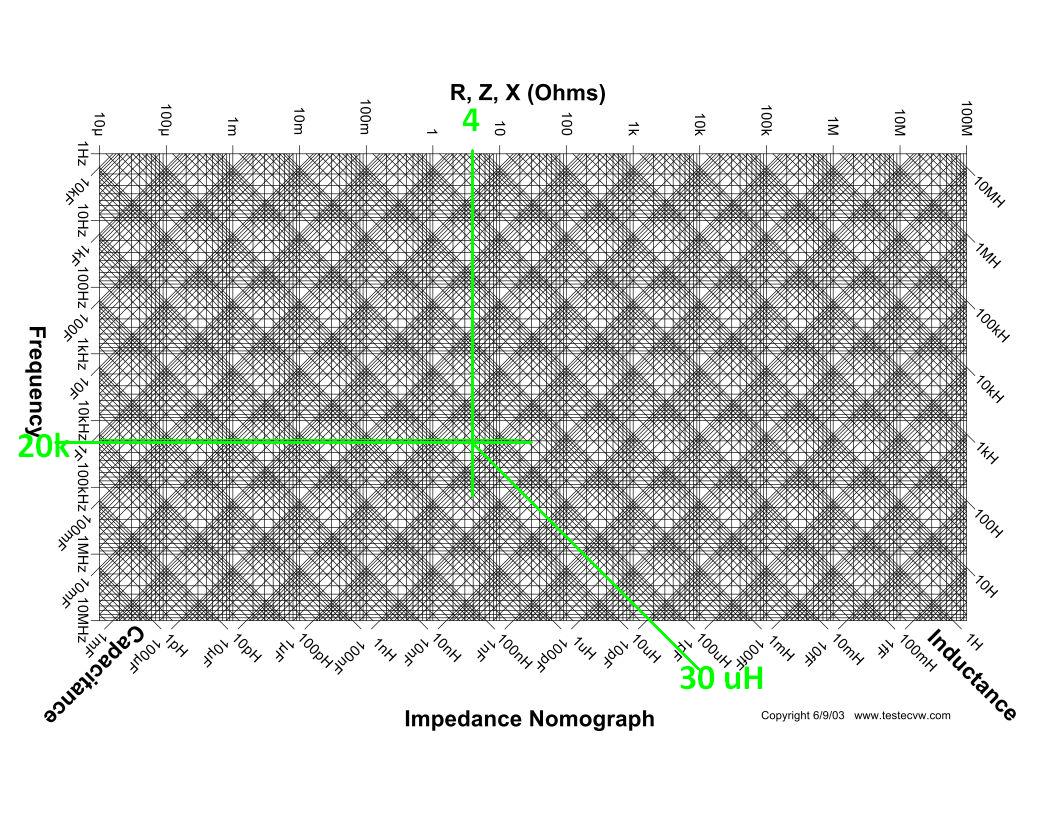 Not the answer you're looking for? Browse other questions tagged amplifier coil distortion or ask your own question.

-3
Optimal coil specification connected to a 160W audio amplifier to produce an "intense" varying magnetic field
0
Is connecting a generator to the line input of an audio amplifier OK?

1
Impedance for Helmholtz Coil Connected to Audio Amplifier
0
How to detect a magnetic field going over a coil?
5
Need to create a magnetic coil (no core) for low frequency field (20Hz-100Hz)
1
Magnetic coupling between two coils for audio amplifier
3
How to drive a magnet with a coil from an amplifier (to test acoustic guitar resonant frequencies)?
0
Small low frequency magnetic field measurement: soft iron or ferrite coil core?
7
Measuring faint varying magnetic fields with a coil
2
What is the relationship between power supply rating and audio amplifier power rating?