I am doing my first year of engineering and have EE as a compulsory course. My teacher recently gave this question in an exam. He gave me a 5/10. He is not answering anybody's doubts. Can anyone tell me what the right answer is/ where I have gone wrong. I have uploaded the evaluated answer sheets. 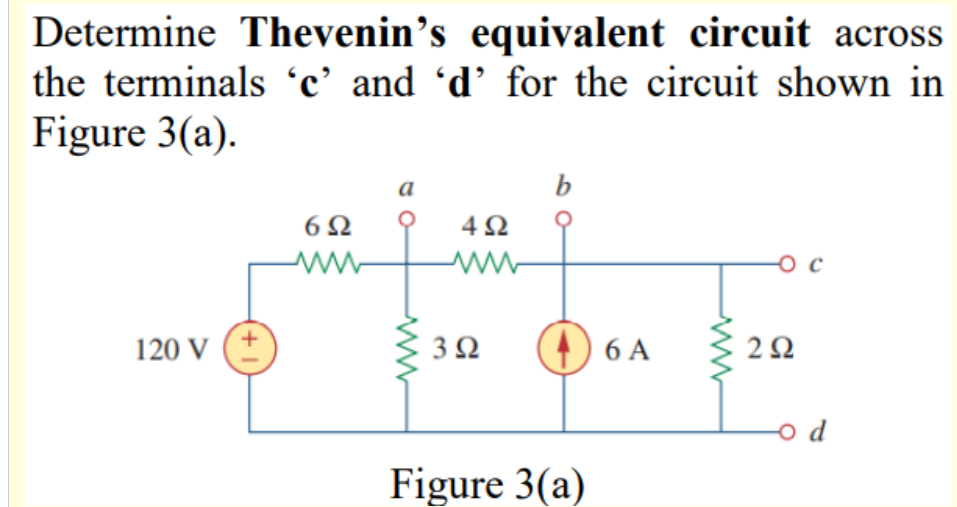 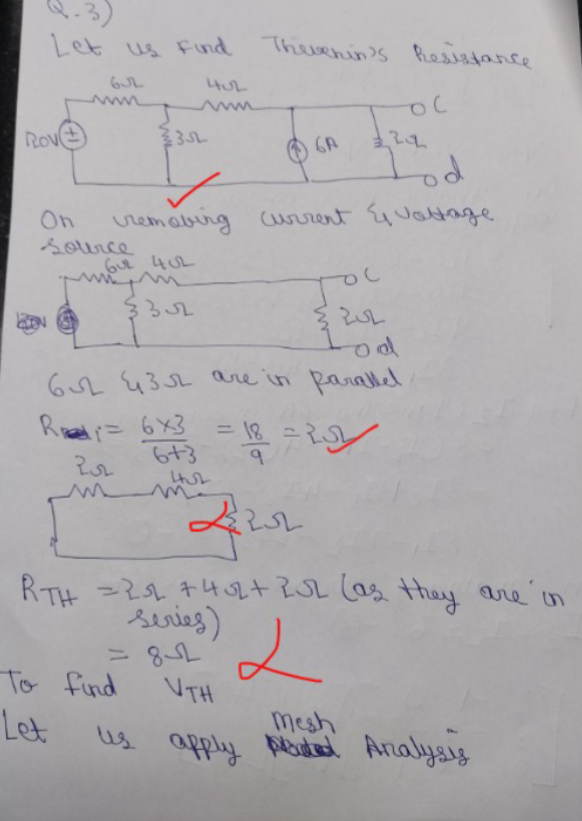 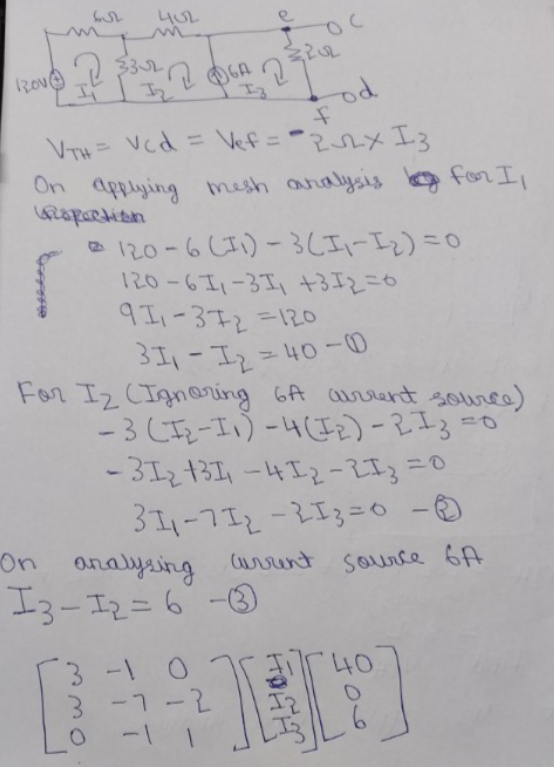 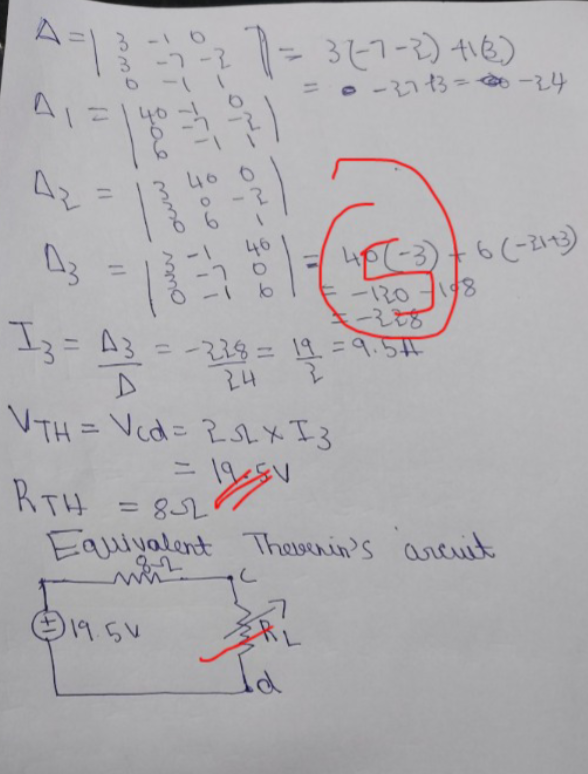 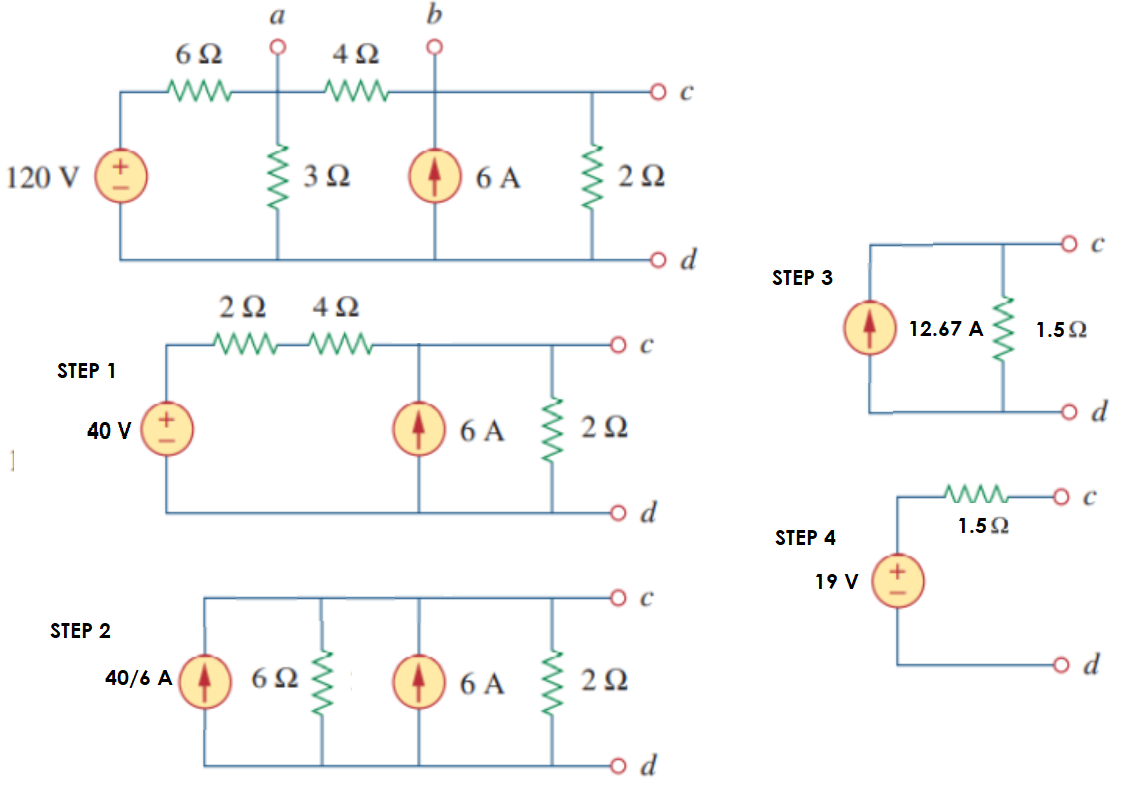 Can anyone tell me what the right answer is/ where I have gone wrong.

Here's where your error is: -

You understood that you considered a series connection of the resistors rather than a parallel connection for \$R_{th}\$. When you have a resistance across measurement terminals - your 2-ohm resistance here - the resistance observed between the said terminals can only be less or equal than that resistance, at least in a simple linear circuit like here.

If I had to pass that exam, below is what I would have written: 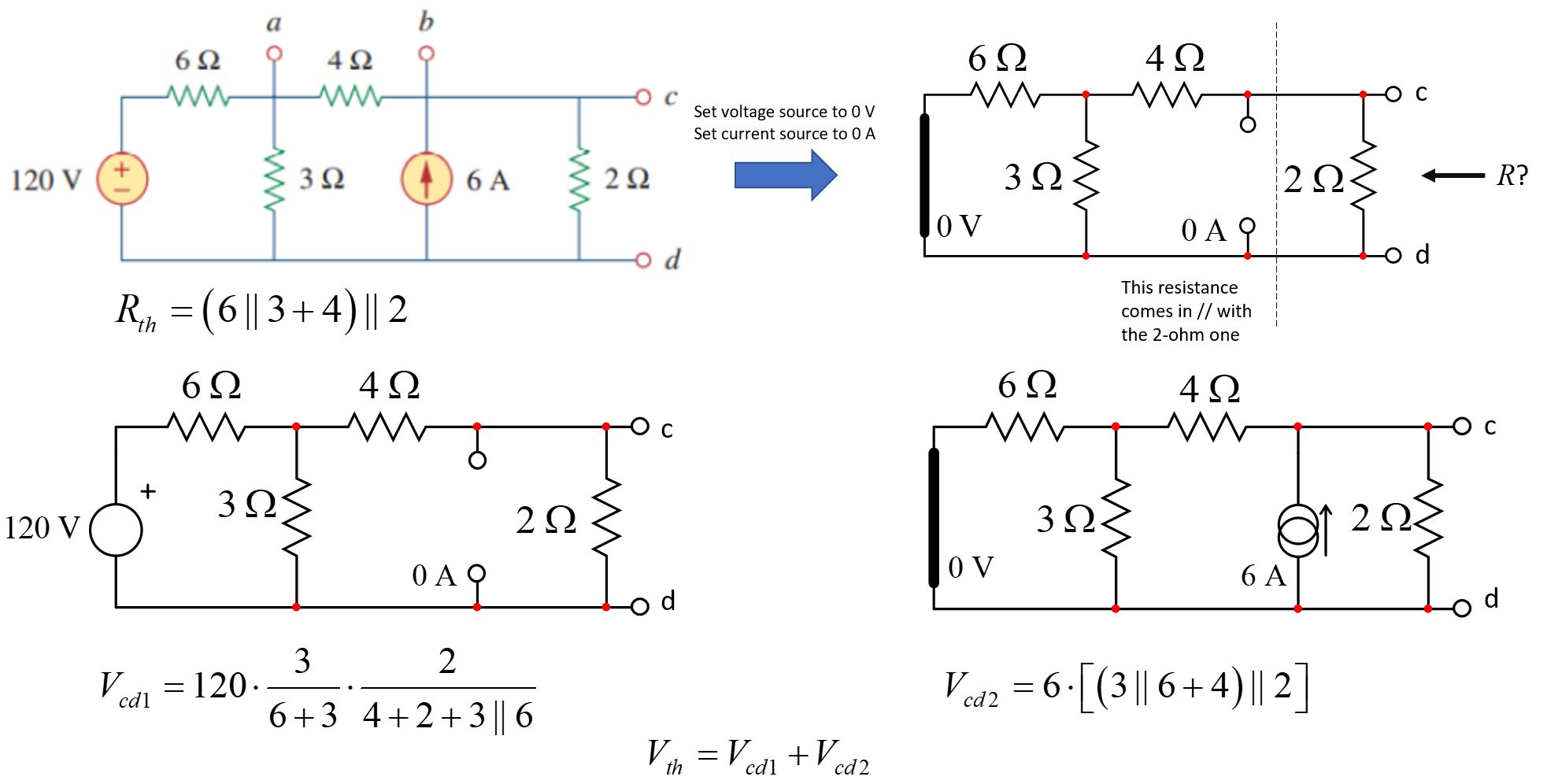 Determining the resistance from terminals c and d is like determining a small-signal resistance in any linear circuit: set all sources to zero (a 0-V source is a short circuit and a 0-A source is open-circuited) then "look" through the consider terminals and infer the resistance you "see". Very often, inspection works and you can infer the value by associating in your mind the resistance you see. It becomes a bit more complicated with controlled sources but the spirit remains the same.

For the Thévenin value, I like superposition and here, inspection also works without resorting to many lines of algebra as shown in the picture. Determine the voltage when the current source is zeroed and then redo the exercise with the current source is alive while the voltage source is zeroed. The voltage you want is the sum of these intermediate values. I captured a quick SPICE schematic and a Mathcad sheet to verify my results. Of course you don't have access to these during the exam : ) 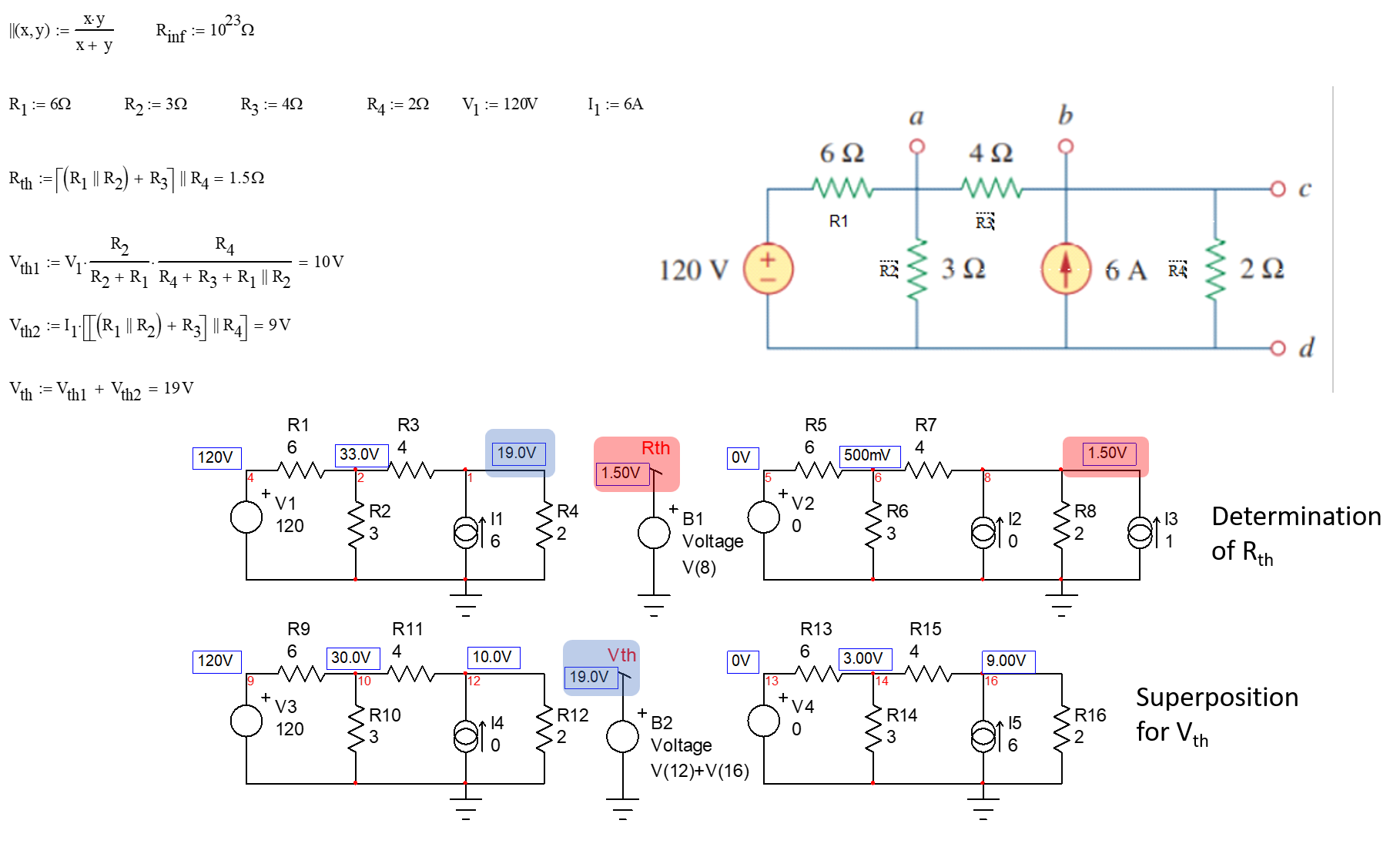 I provided my approach in a short comment shortly after Andy's answer. And while I don't disagree with Andy, the additional two answers I see now elaborate similar approaches.

However, I'm annoyed by one thing, now.

Rule #0 for me is and always will be -- redraw the schematic!

This lack so far is now the only thing forcing me to write.

Preface to Redrawing the Schematic

The first thing I do before attempting to analyze a circuit is to redraw that circuit. The process of just doing it helps me think and gather up a few details that I may not notice so easily, just staring at someone's depiction. But I can often help the readability, too, which improves understanding and reduces chances for mistakes, later.

It takes lots of practice to accumulate a good sense about it. But that practice is well worth your time.

You should also use the built-in schematic editor here. It will add part numbers and this helps to save time and confusion when communicating in comments or in answers.

And finally, keep in mind that you get to call one node "ground." If you select a really convenient one, it can greatly simplify the analysis and reduce chances for mistakes, as well.

(This doesn't always have to be the obvious choice or the one that the writer chose. You can move it to a different location if that helps your analysis.)

For more, see the Addendum at the end, below.

Note that I've selected d as ground. It shouldn't need much explanation. Doing this allows me to avoid busing wires around that are just "noise" in understanding the circuit, better. It also provides an obvious reference for node c, allowing us to see the desired voltage difference as a "single-ended" value (also reducing mental clutter.)

I also note that node b and c are the same node in the schematic. The added notation explicitly draws the reader, if nothing else does, into realising that the two identifiers may substitute for each other in the analysis text. For some readers, this may be obvious and not worth a moment's time. But for others just learning to read schematics for the first time, it may be helpful.

There are two unknown node voltages in the schematic. So a KCL solution will involve the simultaneous solution of two linear equations. But as I indicated in comments, there's no need for using matrices here. That said, I will do the KCL later. For now, I want to focus on rapidly converting the above schematic: 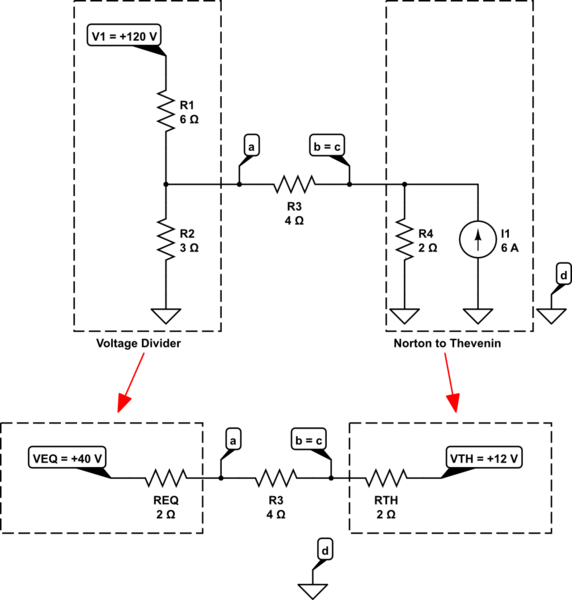 The right side Norton-to-Thevenin conversion is also a reasonable assumption for the reader. I've labeled the resulting Thevenin equivalent as \$V_{_\text{TH}}\$ and \$R_{_\text{TH}}\$, above.

This is now a rather much simpler circuit -- just a few known resistances in between two known voltage sources.

We want the node voltage for c. The longer process would be to work out the current and then the voltage drops across each resistor and from there work out \$V_{_\text{C}}\$ by either subtracting drops from \$V_{_\text{EQ}}\$ or else adding a drop from \$V_{_\text{TH}}\$. But the expanded voltage divider equation can also do the trick:

Just to be pedantic, I'll now use SymPy, which is freely available. I won't bother with much explanation at this point, leaving that for the reader to work out.

(I'll add an external current source that we'll use to figure out the impedance.)

First, I will present a method that uses Mathematica to solve this problem. I know that this approach is not 'smart' but this method will work all the time, even when the circuit is way complicated than this one. In combination with the other answers, my answer is valuable.

Well, we are trying to analyze the following circuit:

When we use and apply KCL, we can write the following set of equations:

When we use and apply Ohm's law, we can write the following set of equations:

Now, we can set up a Mathematica-code to solve for all the voltages and currents:

Now, we can find:

Where I used the following Mathematica-codes:

So, using your values we get:

Not the answer you're looking for? Browse other questions tagged dc current-source thevenin nodal-analysis mesh or ask your own question.