Why are these capacitors treated as if they are in series? Why must the incoming and outgoing current in a battery always be equal?

A circuit with three capacitors and an open end at A: 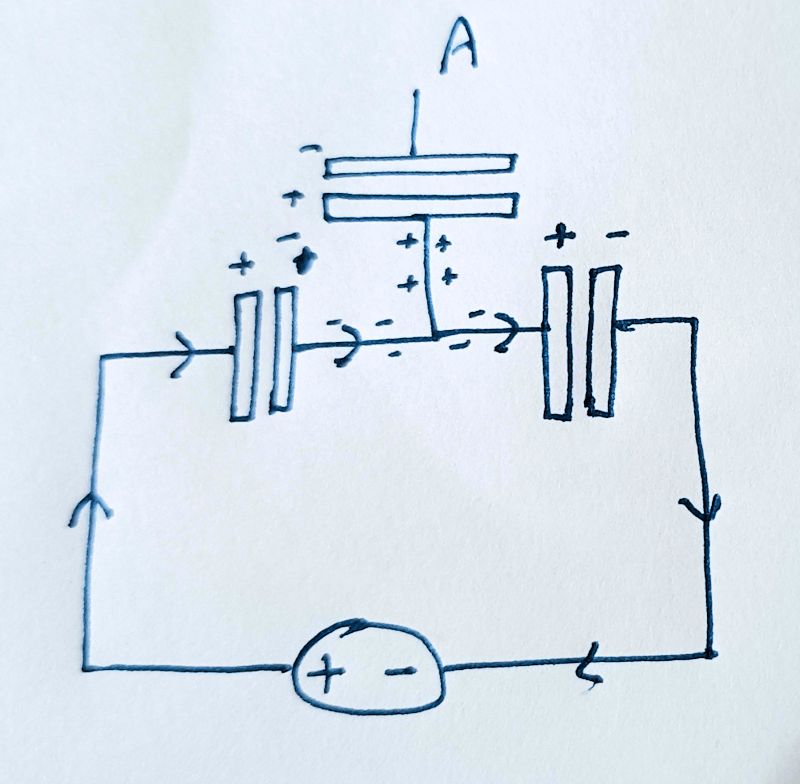 I am a high school student. I am very confused by this example.

The circuit is open at end "A" as shown but still there would be some surface charges on the capacitor which is not connected in closed circuit. There would be surface charges on the wires so that the net electric field everywhere inside the conductors will be 0, but in the school textbook they say that current will not go towards an open end so we can treat those two capacitors which are connected in closed circuit to be in series combination. Also all the charges that are accumulating on one plate would come from the other plate connected in series.

In this way all the charge that leave from one end of the battery would enter into other end, but how is this even possible?

Charges are accumulating on wires also and on capacitor which have an open end but we are ignoring them. Why? If we don't ignore them then the capacitors would not be in series and also the charges leaving one end of battery and entering other would not be equal.

Unless this circuit is being operated with a voltage source with frequency in the megahertz or more, there's not much point in analysing what happens to actual charges here.

You can rely on Kirchhoff's Current Law to tell you everything you need to know about this circuit, and yes, it works for capacitors too. If you insist on talking about charges, let me assure you, that if one single electron enters one side of a capacitor, then another exits the other side. If that happens to the top capacitor in your diagram, you now have a greater charge density at A than before, and the change in potential that causes would simply push the electron right back in again.

Because current in equals current out, and because there is "infinite" resistance to current flow out of A, no current flows in that top capacitor, and you can consider it to be entirely absent. Consequently, all that remains is the other capacitors in series.

As far as charges entering and leaving the voltage source are concerned, one thing is certain; no electron that leaves that source can ever return to it "in person" because there are dielectric barriers in the capacitors, which the electrons cannot traverse.

This should tell you that the electrons entering the voltage source must already be present in the wire connected to it. I'm alluding to your idea that charges accumulate in wires, which is not the case. They are always there. Like when you switch on the tap in your bathroom, water emerges immediately, because water was already in the pipe. If the pipe was empty, sure, you would have to wait for the water to arrive from the tank, but that's not how electric current works. Charges are always present in conductors, it's simply not possible to "empty" them of charge.

What I just said is true, but capacitors seem to act differently. It is possible to remove charges from a plate, but as you do, more charges will be drawn onto the other plate as a result. The total quantity of charges on both plates of a capacitor doesn't change, but their distribution within, does. This is why I can say that if charge enters one capacitor terminal, then the same amount of charge must necessarily leave out of the other terminal. Current in equals current out, in accordance with Kirchoff's Current Law. All that has changed, really, is the distribution of charges on the plates of the capacitor, and no charge ever crosses the dielectric.

Of course, charges are moving all the time, mainly due to kinetic energy which we call "heat", so what I am describing here is an "average" behaviour of trillions of charges. Sure a few might move upwards towards A, but they will displace another bunch back down again, so on average, there's no current flow.

So, ignoring individual charge behaviour, en-masse they behave in such a way that it is simply not possible for charges to enter anything without an equivalent quantity also leaving, which may or may not be the same actual charges. When you charge a battery, there are not more electrons in it now than there were before, they are simply distributed differently with the battery. Current in always equals current out, and that's Kirchhoff's Current Law (KCL) in a nutshell.

Also, just to drive the point home, within a section of wire, there are a certain number of electrons which are mobile, and can participate in "electric current". That number doesn't change, whether current is flowing or not. When a million electrons are pushed in one end, a million are shoved out of the other end, the total number occupying the wire section never changing.

You should discard the notion that charge "builds up" anywhere, except under very particular circumstances. For example, a FET's gate may accumulate electrons, but that will simply expel electrons in the channel, forming a depletion zone. From the perspective of an observer outside this FET, though, KCL was obeyed, because those expelled electrons will manifest an equal charge flow out of the drain and/or source. In other words, even though individual devices may rely on some imbalance of charge distribution within them, their net charge content does not change. To the engineer outside, no imbalance would be visible, and no violation of KCL would occur.

This is a model, or ideal circuit, that is a useful approximation (in many cases) to a real world circuit.

If we wanted to use a circuit model to take account of the charges on the surfaces of the wires, and on the dangling connection to the top capacitor, then we would add extra capacitor components, and label them Cstray. For typical circuits they would be quite small, often just a few pF, to correctly account for the amount of charge that's there at battery voltages.

If the components shown in the circuit are in the nF or uF region, then you can see that the stray capacitance absorbs so little charge that we can safely ignore it, compared to the charge on the main components.

Not all teachers make this approximation aspect of circuit theory clear, it seems yours hasn't. It's always a problem when teaching a potentially very complicated topic. Do you make the approximation explicit and frighten the noobs, or just present the approximation and leave the deeper thinkers mistrusting what you've said?

Note that even when we have modeled the distributed charges with stray capacitors, we only have a better description of some real physical circuit, not a correct or ideal one. The actual circuit will have conductors that have some physical length to them, and so have inductance, or might even need to be treated as transmission lines or antennae. In the limit, we can always find some operating condition or accuracy level that defeats a circuit model.

Depending on the frequency we want to operate at, and the accuracy we want, the trick is to model the circuit in as few ideal components as possible, and still capture the behaviour that we are interested in. We often sum it up in the aphorism by George Box, All models are wrong, but some are useful.

The easiest way to handle surface charges is to use a fields and charges model, rather than a circuit model. This is ideal for capturing the electric fields as the result of some geometry of voltage sources and wires. While that model is very good for electrostatics, it's not the right tool to attempt to describe circuits with.

Not the answer you're looking for? Browse other questions tagged circuit-analysis capacitor batteries capacitance battery-chemistry or ask your own question.