I have a Raspberry PI board connected to some external circuitry, and am using Microchip MCP23008 I2C GPIO expander chips to control external LEDs and motor circuitry. One important part of this external circuitry is a 12V buck-boost switching power supply which is powered off of a 9V battery. The buck-boost regulator does not have an enable pin, and I am working out a way to cut the power to the regulator.

I already have a working 9V low-battery indicator circuit (shown below), which turns on the green LED if the battery is supplying a voltage greater than 7.0V, and if the voltage dips below 7.0V, the red LED is enabled. The circuit should also cut off the current coming out of the source of Q4. 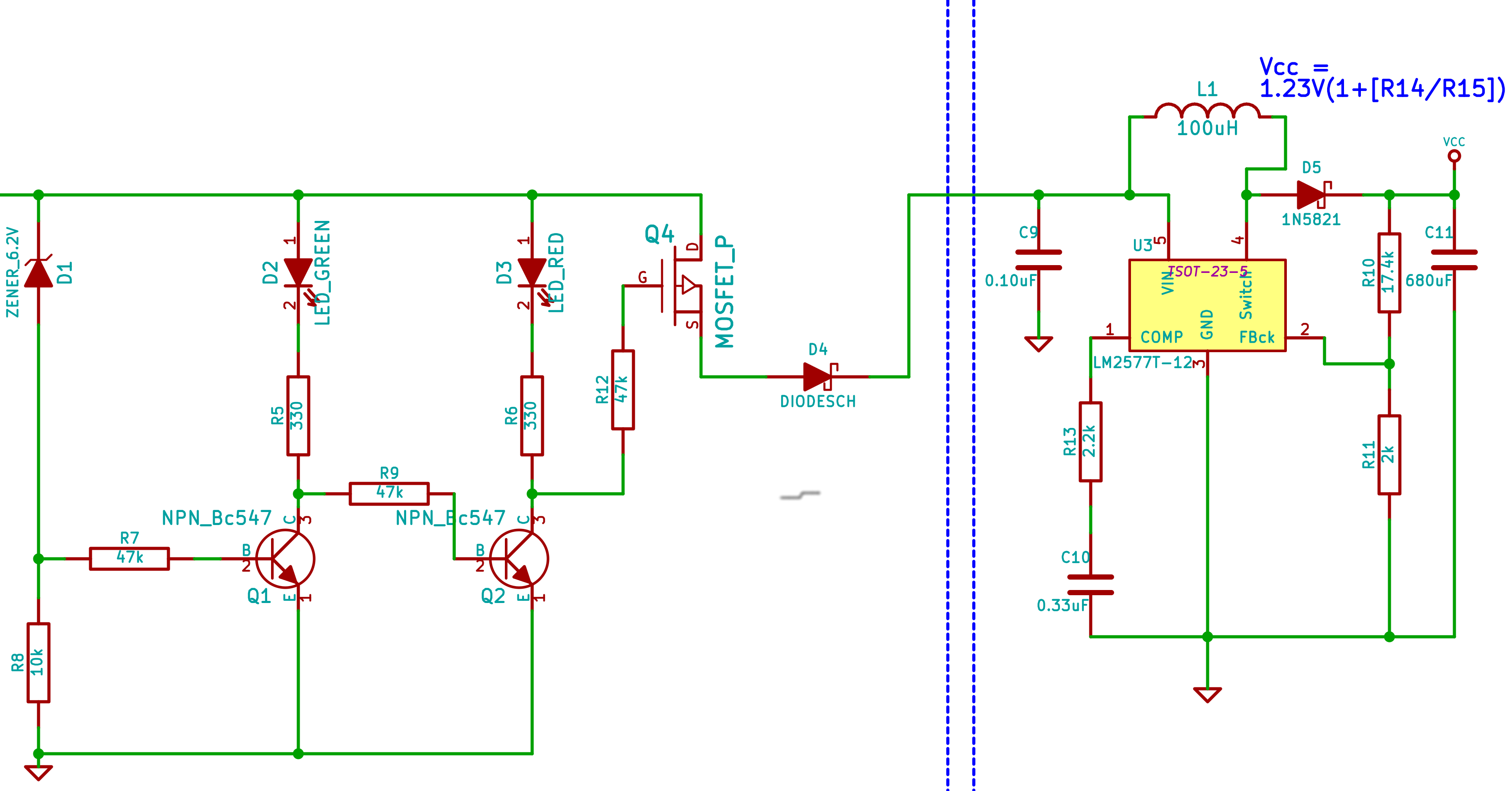 I have two questions with respect to this circuit:

First, does the cutoff logic make sense? My assumption is that if the red LED is off, no current is going through D3, R6, and Q2, so the voltage at the node between R6 and the collector of Q2 would be the same as the power rail connected at the top to D1, D2, D3, and Q4's drain. If the red LED is on, there's a 0.7V drop across it, then a moderate drop across R6 (ie: estimated current, (7.0V-0.7V) / 330R = 19mA, so a 6.27V drop across the resistor roughly), and since this will make the Q4 bias less than that connected to Q4's drain, Q4 is turned off, cutting off power to the buck-boost converter. I'm convinced I'm overlooking V_ce on Q2 though.

Second, is it safe to assume the regulator can run from the output of the source of Q4 and D4? My estimates suggest that I will, when drawing current, have a 0.2V drop (V_ds) across Q4, and another 0.3V drop across D4. 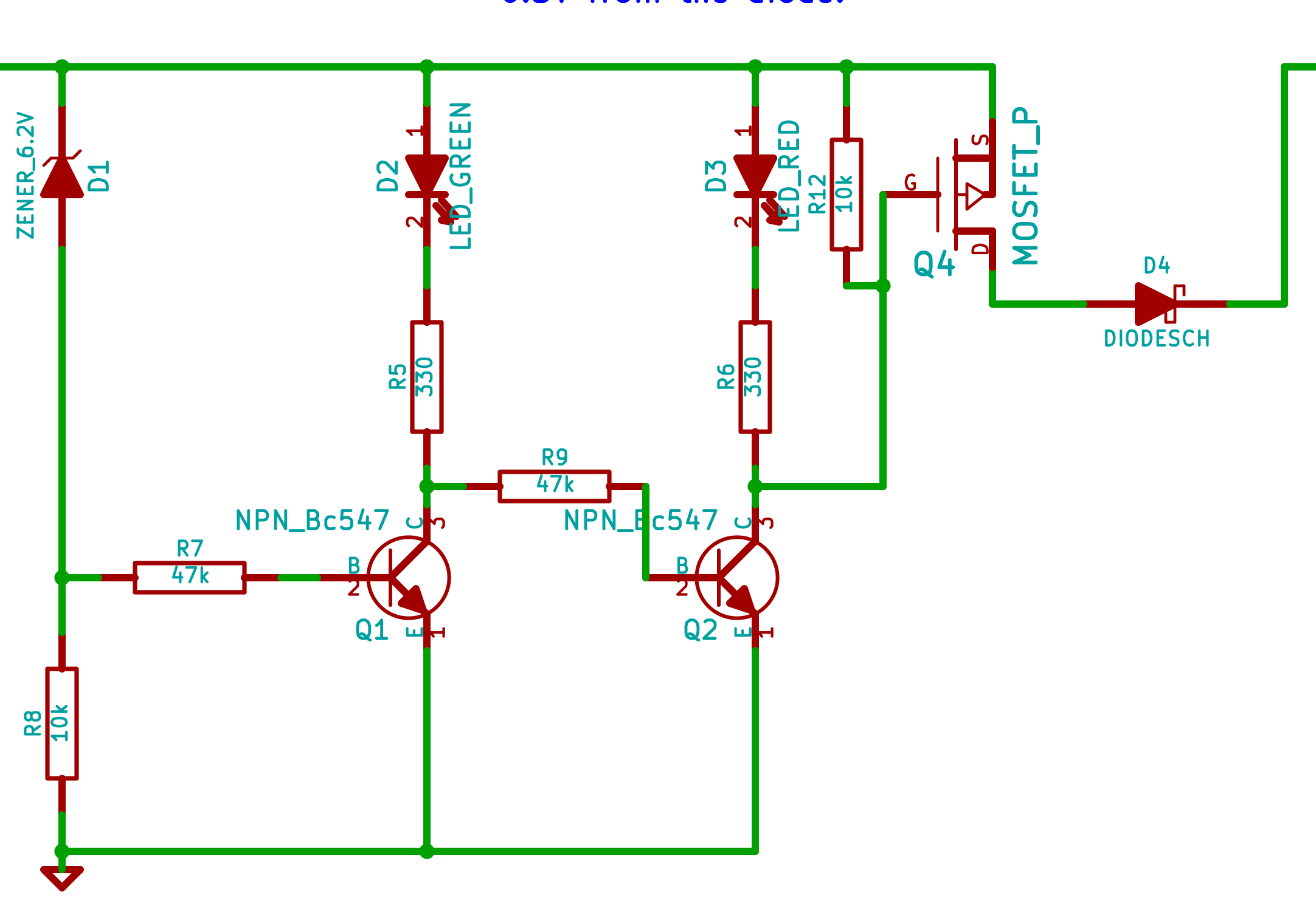 Edit 2: Updating as per latest answers.

I updated the circuit to reflect that of the answer provided by @DanLaks. Attaching DC sweep simulation.

There's a couple issues with your circuit. I'll try to address them and answer your specific questions. My answer is based on your "Version 2" circuit.

First, the value for R7 is a bit high. When the battery is still good, that resistor is keeping the current into the base of Q1 very low, which allows very little current through the green LED. The voltage drop across R5 is therefore small, which means Vce of Q1 will be somewhat large. If it's too large, there'll be enough voltage to turn on Q2, which will activate the red LED as well. I'd recommend reducing R7 by an order of magnitude. 4.7k should work better.

You can see the transistor logic to turn on and off Q4 is similar, but I tap off of the node between D1 and R8 and feed it into the base of a new npn. You could almost use Q1 instead of placing a new transistor, but the base of Q2 causes current to flow through D2, R5, and R9, and thus the voltage there isn't quite what we want.

One thing to consider with the automatic switch off is that you might experience power oscillations. When the circuit downstream of U3 drains the battery enough for the cutoff to activate, the sudden relaxation on the battery may cause its voltage to bump back up above the threshold. This will turn Q4 back on, which will cause the circuit to start draining current again, which will repeat the cycle. Possibly for a long time. If this is not acceptable, you will have to work hysteresis into the circuit.

To address your specific question about D4, yes, you can use that diode there. As long as the voltage at the VIN pin of U3 is with acceptable range after the diode drop. And obviously D4 must be able to comfortably handle the maximum amount of current into the circuit downstream. The same is true, obviously, for Q4. In addition, you have to account for the voltage drop across Q4 due to the Rds(on) of the transistor.

You say you're using a 9V battery. Is this a standard 9V alkaline used in smoke detectors and such? If so, I'm curious how much current you expect to draw out of it. Those kinds of batteries tend to have (relatively) high internal resistances and can't source very much current before their voltage starts to drop off considerably. If you're only in the 10's of milliamps, you're probably ok. Much higher and you might run into voltage problems.

I'm not sure the P Channel MOSFET is being biased correctly. Your other logic seems correct though. Q4 needs the Gate negative in respect to the Source in order to conduct. Conversely, if the Gate is held positive, or near the same potential as the Source, it will not conduct.

I'd flip the connections on the Source and Drain. Also, a resistor should be between the V_Batt rail and the Gate. This ensures that the device can turn off. Then remove R12, and connect the junction of R6 and Q2 collector directly to Q4 gate. This should ensure that you can turn Q4 on and off.

Not the answer you're looking for? Browse other questions tagged power-supply power mosfet analog pmos or ask your own question.

0
Driving P-Channel MOSFET from MCU Pin While Running on Coin Battery
0
Why did starting a motor burn out my power regulator?
1
MOSFETs acting strange on different power supply
1
Getting brownouts when using MCU controlled P-FET to switch power to another board
0
Switch off branch of a circuit when voltage is present in another branch [power path management]
0
Turn off circuit using microcontroller signal
0
Isolated power supply with Vout = Vin
0
Powering LED light with power bank
2
High-Side P-Channel MOSFET Won't Turn Off!
2
Power efficiency with Boost vs Buck-Boost using same regulator