I 've implemented this basic logic gate on a breadboard. Only my circuit has +5 supply voltage. The resistor values are 10K for diode inputs and 1K for collector of the transistor. The transistor is a 2N3904 and the diodes are 1N4148. 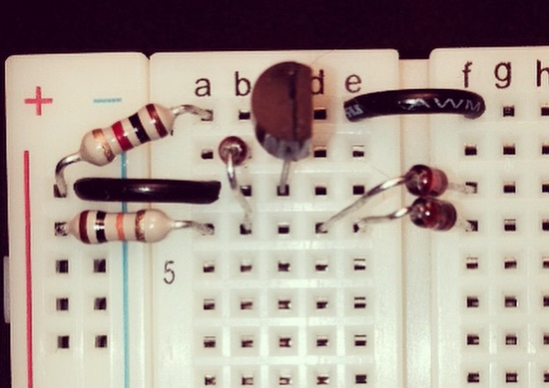 I'm really confused about the inputs for this. I've read that the inputs should be low voltage, but I've tried all sorts of voltages and nothing. However, when I put one of the inputs to ground, the LED turns on. This got me thinking, if in fact connecting input to ground was 1, then both of them being to ground "AND" would cause the LED to shut off. If thats the case, how on earth do I implement this with a button or switch? Also, is my circuit shorting somehow, or perhaps are these values not working with the +5V? I've tested the RTL version and the 1K + 10K + 2N3904 works perfectly.

That circuit looks like a NAND gate to me - Basically what happens is that if any of the inputs are driven low, it will pull down the voltage reverse biasing the pair of diodes meaning the transistor will be pulled down to zero by R2. If both of the inputs are high, the input diodes will not conduct and the transistor base will be pulled high through R1 causing it to switch on:

If the transistor is on, it will pull the output down to ground, hence the NAND function. Essentially the extra transistor acts as an inverter and hence you see the opposite polarity.

Interestingly if you invert both inputs what you will actually end up with is an OR gate, not an AND as you thought.

Based on the comments, it's now become clear why you were getting different results from what you expected. Basically the output is a current sink when low. As a result if you connect an LED from VCC to the transistor, the LED will be on when the output is low and off when the output is high. This is the case with any load wired in such a way, because only when the transistor is pulling down low is there any voltage across the load.

(Edit: I was right the first time, it's a NAND)