How do you implement the following function using nothing but 2:1 MUX?

I am having difficulties understanding how to implement boolean functions, particularly given that I may only use 2:1 muxes and the variable D as a residual variable.

I also managed to design a 16:1 MUX with A, B, C and E as selector and D as a residual variable.

I understand how a multiplexer works and I am fully capable of deriving a truth table from an existing implementation but I just simply do not understand how to take the truth table, Karnaugh map and the minimized SOP function and implement the function using only 2:1 MUX and D as a residual variable.

I am not necessarily asking for the straight up answer, although it would be nice to see. I am more interested in an explanation, an algorithm or really anything that can help me come up with the implementation myself.

I want to be able to visualize the connection between the function and the implementation, not just learn how to implement it by heart without understanding why it is the way it is.

Thank you for your time!

Edit: While I understood the accepted answer and it is the correct answer, I was then required to use just the following inputs for the data lines of my 2:1 muxes: logic 0, logic 1 and the variable D. The variables A, B, C should only be used as selector lines.

Edit: for the map on the right the value for ABC = 000 should be 0, not 1. A mistake I made when I copied over the table from my notebook into excel. 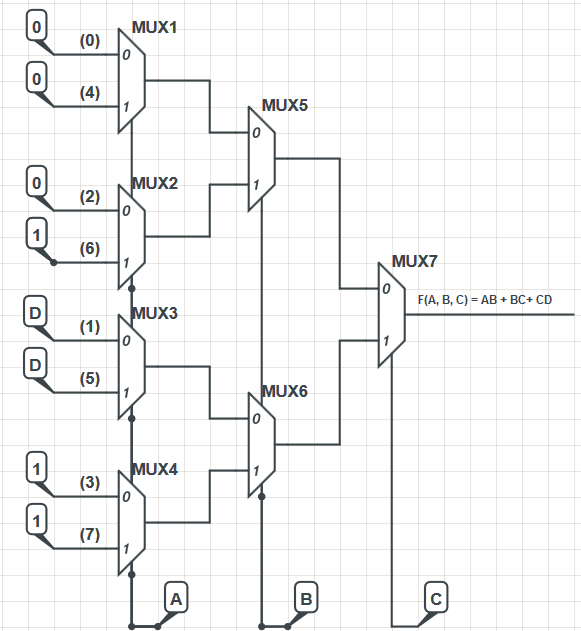 Using yet another Karnaugh map, the above simplifies to AB + BC + CD which is the function I needed to implement.

The design of the MUXes itself is borrowed from an electronics book. In the book, the data inputs of the leftmost level of MUXes were numbered as can be seen in my diagram and the labels represent the decimal equivalent of the F(A, B, C) V-K map cells. If you look at, for example, the cell 101 (binary for 5) then the value in that cell is the input for the correspondingly labeled MUX input in the implementation, in this case 'D'.

It's not too complex, I think, assuming you worked out the equation you wanted correctly (I'll assume you did okay there.) Start by looking at the equation for a 2-in MUX:

From this, you can derive some useful results:

So it follows that: 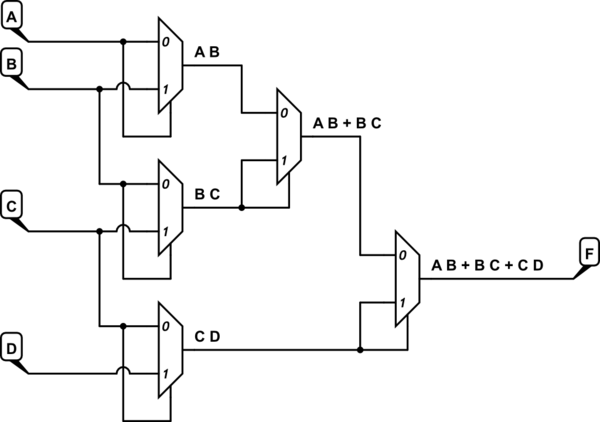 There's also a nice symmetry there. Notice it?

ADDED: You asked about only being able to use 0, 1, or D as a mux data input source. I assume by this that you mean that all of A, B, C, and D can be used as mux selectors. (Otherwise, I don't think the result can be achieved.) So, this just means you need to use some of the other useful results I'd earlier mentioned. The simplest idea would be to just add three more 2-in muxes: 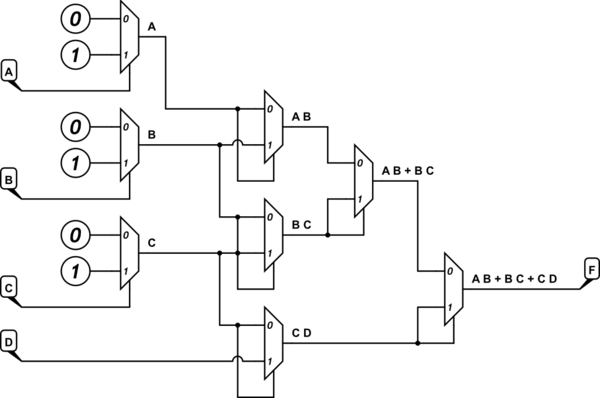 I'm not sure if there is a way to optimize it further. I haven't examined all of the possibilities.

All that remains is for mux7 to pick between C=0 and C=1.

A 2:1 mux contains an inverter, two AND gates and an OR gate. With appropriate wiring, you can use it as an AND gate, an OR gate, an inverter, and a few other functions. In fact, certain families of FPGAs are based entirely on this concept.

This should be enough of a hint to enable you to realize any arbitrary function using 2:1 muxes.

Without doing anything nearly so fancy, you just have to realize that a multiplexer lets you explicitly set the output value for truth table rows that correspond to the decoded select inputs. So, with a four input multiplexer (and therefore two select bits), you can represent any 2 input boolean function by simply hard-wiring the inputs appropriately.

You can get away with a hidden variable because you only have 16 minterms even though you have a 32 row truth table, and they are grouped in such a way that entire subtrees are ignorable.

Not the answer you're looking for? Browse other questions tagged multiplexer logic-gates decoder boolean-algebra or ask your own question.

0
Implementing a function using a mux and no gates at all
0
How can you obtain SOP and POS (Boolean Logic) given the truth table?
6
Build circuit from a formula
0
How to choose which function to use depending on the parameter value? (MUX and Gates implementation)
0
How can this logic be formed by using the Karnaugh map?
0
Can anyone help me understand how to implement a karnaugh map using multiplexers in logism?
1
I am trying to implement a function using only NAND gates