What happens if you add a voltage source to the output of an op-amp?

I'm trying to self-learn EE and have a question:

What happens if you add an external voltage source to the output of an op-amp? Say as in this picture: 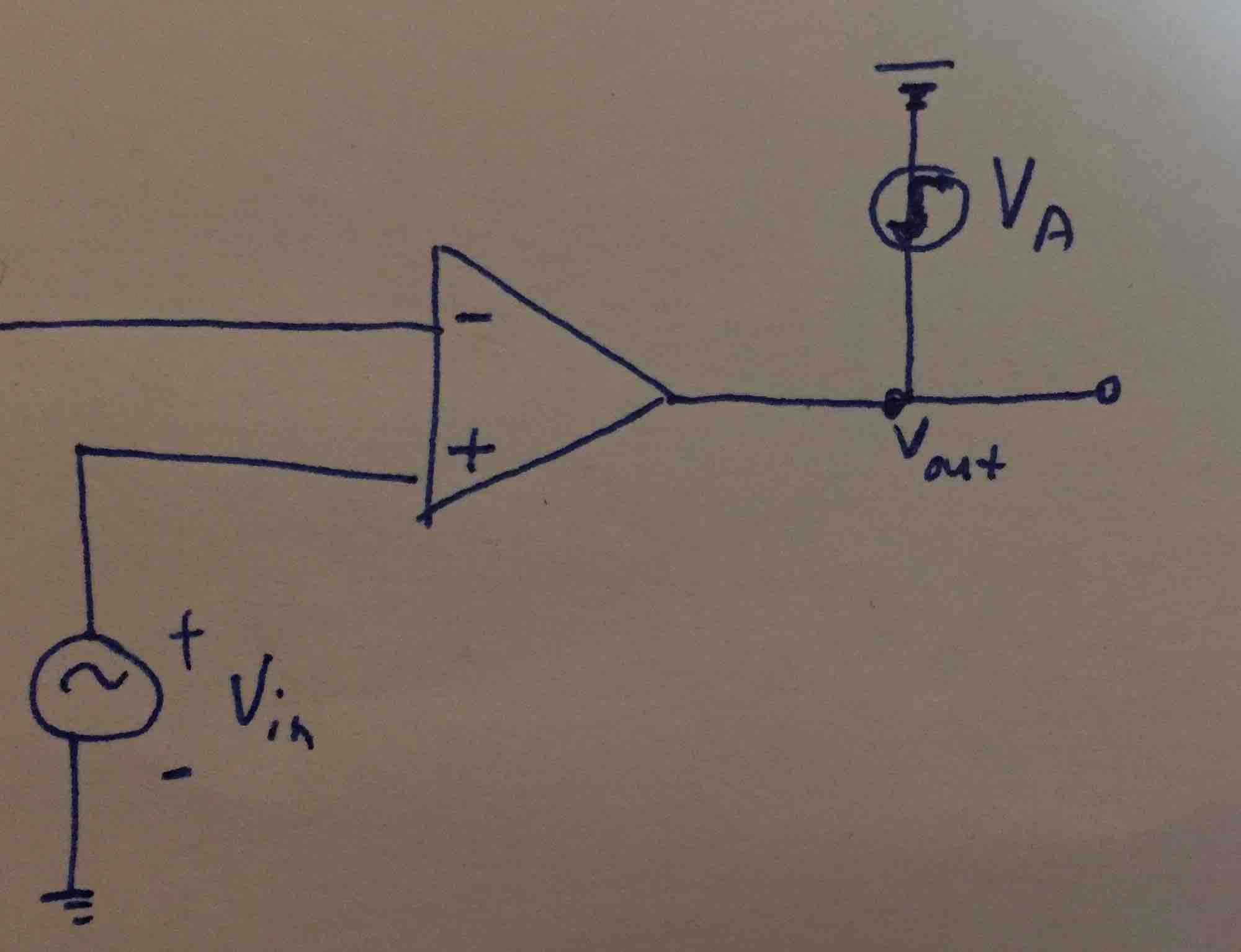 I know that WITHOUT the Va, Vout would just be Vin (is this a correct assumption? I'm assuming here that V+ = V- = Vin). However, we're adding a Va source, so would Vout just be Vin + Va?

EDIT: to answer mga's question, I made up the circuit but it comes from thinking about 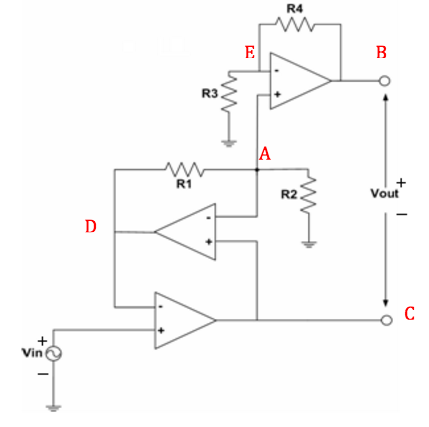 The op-amp that I'm confused about is the bottom left one; the Vout of that op-amp is equal the voltage at the red A and I understand this mathematically but I don't understand it intuitively. Why wouldn't it be Vin + Va?

I think you're mixing up a few different concepts. Let's tackle them one at a time.

First, the output voltage of an op amp is indeed \$V_{out} = A_v \cdot (V_+ - V_-)\$. That's the definition of a differential amplifier. But in an op amp, \$A_v\$ is huge -- a million or more in some cases. Because of that, any negative feedback causes the op amp inputs to be very close to each other. This is the only condition that gives you a non-huge output voltage.

As for your complex circuit, there's no voltage source driving an op amp output. The middle op amp is acting as a non-inverting amplifier. The input is \$V_C\$ (the output of the bottom op amp) and the output is \$V_D\$. The relationship between them is:

To answer your first question -- if you connect an ideal voltage source to an ideal op amp output, you break the rules of circuit theory and don't get a meaningful answer. In real life, what happens depends on how the voltage source and op amp are built. Probably it will be something like this:

The output resistances of the op amp and voltage source will form a voltage divider between the two. These resistances will be small (and unpredictable), so lots of current will flow and you won't know what the voltage will be until you try it. Obviously, this is bad, so don't do it. :-)

To improve your intuition, it might help to start with some simpler examples. Consider the basic voltage follower: 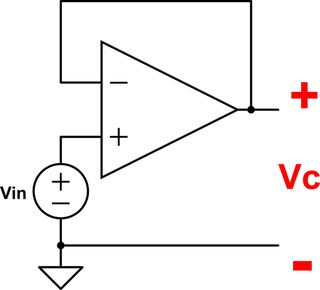 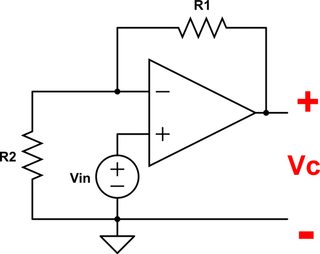 This is a non-inverting amplifier. It works the same way as the voltage follower, but now the output has to be higher than \$V_{in}\$ to stabilize. (The stable state is really when \$V_- = V_{in}\$.) But adding resistors doesn't change the basic principle, right? 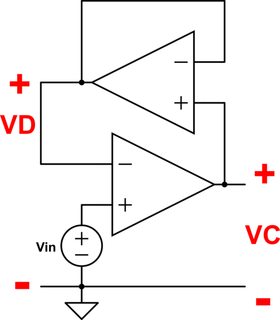 Your circuit is like that, only the top op amp forms a non-inverting amplifier instead of a voltage follower: 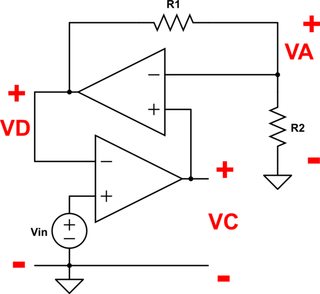 This is the same as the previous circuit, except now the bottom op amp's output has to be less than \$V_{in}\$ for the circuit to stabilize. For example, if both resistors are 1k, then:

This concept of connecting an output back to an input is called negative feedback. It's widely used in electronics and mechanical control systems (among other things). There's a whole subfield of engineering called Control Systems that studies how to use negative feedback to improve the performance of a system and how to guarantee that it doesn't become unstable.

I found the ideal op amp rules very confusing when I first learned them. Hopefully these examples of transient behavior will help you make sense of things.

If you add a voltage source to the output of an op-amp, you have two devices with low output impedance trying to drive a node to a certain voltage and both have theoretical infinite current source/sink capability. In the real world, your voltage source blows up your op-amp. End of story.

It's not X+Va because two voltage sources driving a node to two different voltages results in lots of energy getting dumped from one to the other. Voltages do not sum up to each other at nodes. If you take a 1.5 volt battery and a 9 volt battery and ground their negative terminals together and join their positive terminals, you don't end up with 10.5 volts. Instead the 9 volt battery starts dumping its energy into the 1.5V battery. The 1.5V battery starts "recharging" before it explodes.

bottom left one; the Vout of that op-amp is equal the voltage at the red A

Since an op amp is just a voltage controlled voltage source, I can translate your question into a simpler one: What happens in the circuit below? 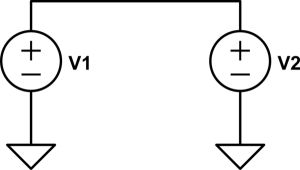 Not the answer you're looking for? Browse other questions tagged voltage operational-amplifier circuit-analysis basic or ask your own question.

0
Confused how to derive output voltage from Op Amp and RC circuit
0
Op Amp Voltage and Current Output
0
How do op-amp output add to/substract from the input voltage in postive/negative feedback?
0
Voltage Referencing Question
0
Unity Gain Buffer Initial Conditions
1
Op Amp voltage output without source connection
0
How does an inverting op-amp feeds back 0 volts when the Vout is not 0
1
OP Amp output voltage half
0
What is the derivation for the error due to opamp open loop gain in this case?