Why the Q-point of an amplifier with collector-feedback resistor are stable and not randomly moves on output BJT-curves when the power supply in applied to the circuit? The schematic is below: 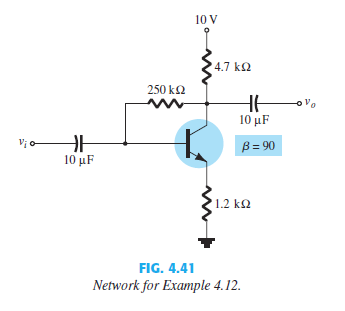 There are a couple of ways of approaching such a question. One is to think from a reductionist approach and see where that takes you. The other is to just go look at the equations using Thevenin, solve them completely, and see if you can gain additional insight from those.

The collector voltage is then:

And from here you can see that this equation turns on how the last term varies with changes in \$\beta\$. But it also appears that the value of \$R_B\$ is also important, when compared to the other resistor values, and that its importance increases with smaller values of \$\beta\$.

There are a couple of mental directions to go from here.

Thevenin expansion of question (1) above follows:

This seems to be hardly any difference. But it provides us with a quick look at the modifications, too. Given the relatively minor differences, it seems like the earlier, easier, and less complex equation wasn't too bad, after all.

Question (2) above really wants us to ask about the sensitivity of \$V_C\$ to percent changes in \$\beta\$. We can answer the question about the sensitivity of \$V_C\$ to incremental changes in \$\beta\$ by solving for \$\frac{\textrm{d} V_C}{\textrm{d} \beta}\$. But what if that's not as interesting as asking about percent changes?

Thinking just a little deeper, we find a curious answer we may want to find is:

Note that there is factor inserted here that scales the differential equation that would apply for a "change by 1" to make this a unitless comparison of % changes, instead. This form of equation answers the following question: "What percent change in \$V_C\$ would occur for a given percent change in \$\beta\$?"

And that's actually a decent question.

And with the values you provided with the schematic, I find that the answer is approximately -0.32. Which means that you'd get about a 10% downward change in \$V_C\$ for a 31% upward change in \$\beta\$. Since one BJT might vary that much in \$\beta\$, from one to another, this suggests that you probably should not expect to see more than about a 10% change in \$V_C\$ when swapping BJTs into the socket from a bag of them (discounting temperature effects, the Early Effect, and variations in \$V_{BE}\$.)

None of the above deals with overall DC operating point design questions. By this, I mean for example, "If we know \$V_{CC}\$ and \$I_Q\$ as design inputs, and either \$R_C\$ or \$V_C\$ also as a design input, then how would \$R_B\$ and \$R_E\$ depend on them (or other design inputs as yet unmentioned?)" How might asking this question lead to more interesting additional questions about the BJTs used in this topology, generally?

I'll just drop these follow-ups out there for now.

Which leads us to the first of my two laws:

In your collector Feedback circuit, Base resistor RB is connected between base and collector. Hence collector voltage relations are,

Now, suppose collector current increases for some reason like beta change, voltage drop across collector decreases (eq. 1) and also it in turn automatically reduces the base current. Thus collector current is reduced or adjusted back. Thus it keeps transistors at a fixed Q-point. Rb provides that negative feed back to achieve this goal.

Not the answer you're looking for? Browse other questions tagged amplifier bjt feedback or ask your own question.